A 20-year-old Facebook user could face fines or jail time. 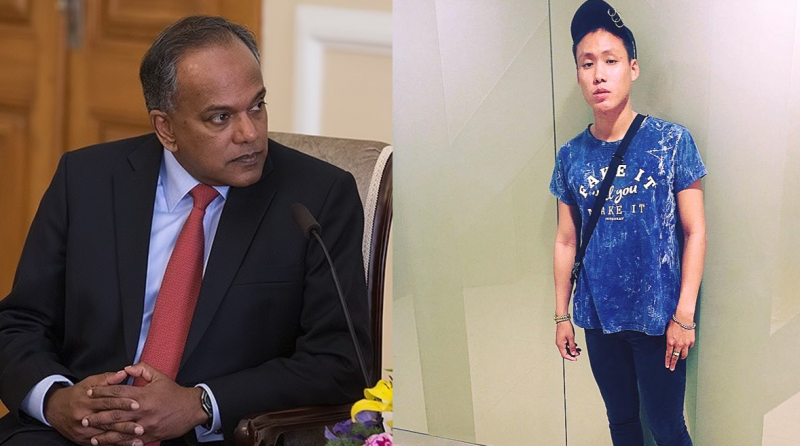 Two Facebook users in Singapore are under police investigation for posting a comment about throwing an egg at Law and Home Affairs Minister K. Shanmugam.

Edmund Zhong, a 20-year old national serviceman, left this comment in a Channel News Asia Facebook post about an Australian teen who threw an egg at a conservative Senator: “I wanna do that to K Shanmugam. I swear.” Another Facebook user encouraged Zhong to do it.

Three days later, Zhong received a police notice at his home informing him that he is being probed for the offence of “communicating an electronic record to incite violence” under Section 267C of the Penal Code. If found guilty, Zhong may face up to five years’ imprisonment or fined, or both.

He shared the police notice in a Facebook group called “Complaint Singapore”.

Apparently 3 days ago, 2 officers from Ang Mo Kio Division HQ went to my home regarding my egg throwing comments towards K Shanmugam. Felt a mix of emotions as I didn't expect a harmless but straightforward comment can gain so much reaction.

In a media interview, Zhong said he was only making a joke. He added that his ‘harmless’ comment should be protected on free speech grounds:

To be honest, I don't feel much regret. I feel it's a matter of freedom of speech, and that we have a right to voice such opinions.

When I was told about it, I laughed it off – the somewhat exaggerated words of a young man.

I was then told about some of his background, and that he would be interviewed to establish that he is not actually going to take any action.

I understood Police’s concerns. I can laugh off these comments, but understandably, Police can’t.

I am much more concerned about his public comments, on his FB, on his attitude to narcotics. I hope he does not actually experiment further with cannabis, regardless of how desirable he thinks drugs are.

Critics seized on the last sentence of the minister's post, that referred to cannabis use. Some accused the minister of trying to intimidate Zhong:

Shanmugan is one of the most powerful people in Singapore and this is a 20-year-old kid.

It is full blown bullying and Shanmugan should be embarassed. Frankly, there is a non-zero chance he just ruined this guy's life because he can't take a joke.

there is really no need for him to bring in and make uncalled-for insinuations about the man’s character over a few posts about drugs.

But the fact that he did so and even repeated the young man’s name on his post shows up his own character.

Some have defended the police, arguing that the agency was simply performing its mandate, and others reminded Zhong and other social media users to take responsibility for their posts. But many netizens have questioned the appropriateness of the police probe, with some calling it a disproportionately harsh response on the part of the police.

The Online Citizen, a news website, posed a set of questions in response to the incident, inferring that it will set an extreme precedent for future cases:

In light of this recent incident, Singaporeans may have cause to wonder if similar comments towards other public figures in the future would justify the course of action by the SPF [Singapore Police Force] as well as the heavy offences charged.

Do trivial matters such as “innocent” comments made on social media need to be exposed through public investigations by using the SPF as a form of personal security or bodyguards in order to intimidate others from doing the same?

The crime that police have threatened to prosecute Zhong for, under section 267C of the penal code, reads as follows:

Whoever….makes or communicates any electronic record containing any incitement to violence or counselling disobedience to the law or to any lawful order of a public servant or likely to lead to any breach of the peace shall be punished with imprisonment for a term which may extend to 5 years, or with fine, or with both.

If Zhong's casually expressed desire to throw an egg at the minister can be interpreted to meet the definition and corresponding punishment laid out above, what other kinds of online speech could be punished at this level?