Morocco’s Hirak movement has gone quiet, but the crackdown on independent media continues

Journalists remain behind bars for covering the protests.

A protest in Al Hoceima in the Rif region in the summer of 2017. Photo by Mohamed Mouha via Wikimedia (CC BY-SA 4.0)

This story is the second in a two-part series on media repression and “fake news” in Morocco. It was written in collaboration with Access Now. You can read the first part here.

The Hirak protest movement in Morocco first took hold after the death of Mohsin Fekri, a fish vendor whose product was seized by authorities in the city of Al Hoceima on October 29, 2016. When Fekri tried to reclaim the fish, he was crushed to death by a garbage truck.

From then until well into 2017, Moroccans in the Rif region held weekly demonstrations protesting poor socio-economic conditions and corrupt government officials, long-neglected by the central government, and they persisted until authorities launched a violent crackdown in June 2017, arresting 400 activists and protesters.

Hamid El Mahdaoui, who ran the news site Badil.info prior to his arrest, is serving three years in jail after he was convicted by the court of appeals of Casablanca in June 2018 of “failure to report a crime threatening national security,’’ due to a phone conversation (an official recording of which was obtained via wiretap) between himself and a Moroccan anti-monarchy activist based in the Netherlands, in which the activist described a plan to bring weapons into the country. 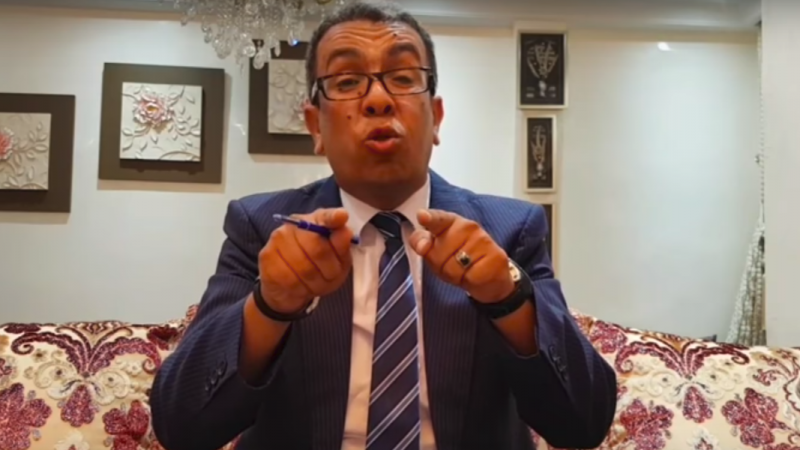 El Mahdaoui speaking in a video about the crackdown on protesters in El Hoceima. Source: Screenshot from a video uploaded on the journalist's YouTube channel on June 28, 2017.

El Mahdaoui had already served a one-year jail sentence for “inciting” protest. He was arrested on July 20, 2017 in the city of Al-Hoceima where he traveled to cover the Hirak protests.

Citizen journalist Mohamed El Asrihi, the editor and director of Rif24.com, a local citizen media website that provided extensive coverage of the protests in Al Hoceima and other cities, is serving five years in prison. The same court found him guilty in June 2018 of “undermining Morocco's internal security by receiving donations and funds for activities and propaganda undermining the Kingdom of Morocco's unity and sovereignty, and the loyalty of its citizens,” as well as “participating in unauthorized demonstrations,” “inciting against the unity of the kingdom,” “insulting government officials,” and “claiming to be a journalist without having acquired the necessary accreditation.”

But even for those journalists who are considered “professional,” legal protections are limited. While in 2016, the Moroccan parliament adopted a new press code that eliminated prison time as punishment, journalists and media can still be fined for “defaming” government ministers (article 81), foreign diplomats (article 82), and state institutions and public officials (article 84). In addition, journalists are still prosecuted and jailed under the penal code which includes provisions punishing by prison and/or fines those convicted of “causing harm” to Islam, the monarchy, or inciting activities that go against the country's territorial integrity.

All these conditions make it difficult for independent media to counter rampant disinformation campaigns, particularly those targeting people who are under threat for their activism and their work covering the Hirak and other events of importance to the public.