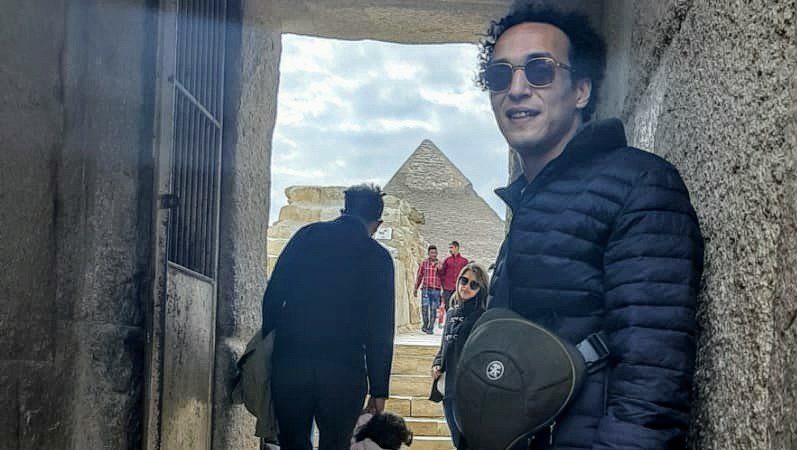 Shawkan enjoying a day out, before he is locked again for the night. Photo taken by Wael Abbas and posted on the photojournalist's Twitter account.

He was detained on August 14, 2013 as he was photographing the deadly dispersal of the Rabaa El Adaweya sit-in, in which supporters of former Egyptian president Mohamed Morsi gathered to protest a military coup that ended his presidency on July 3 that same year. Egyptian security forces killed at least 817 people [2] and injured many more, according to Human Rights Watch, when they dispersed the sit-in.

Shawkan, who was working for Demotix at the time of his arrest, spent [3]almost four years in pre-trial detention before his trial, along with 739 other defendants in what came to be known as the “Rabaa Dispersal Case,” began. In September 2018, a Cairo Criminal Court convicted [4] him on spurious charges of murder and affiliation with the Muslim Brotherhood, and a few months later he was released [5]from jail.

Shawkan’s supporters were thrilled to see him reunited with his loved ones when he was released on March 4. But the journalist is actually only partially free. Every evening at 6pm, he has to report to his local police station where he has to spend the night, before he is free again at 6am the following morning. Shawkan needs to do this every day for five years after his release.

“I want to be free so I can return to normal life,” Shawkan told [6] Deutsche Welle after his release in reference to his probation period.

On Twitter [1] and Instagram [7], the journalist has been reflecting and posting about his life under these restrictive conditions and his daily hours of freedom, from 6am to 6pm.

On March 31, he posted about his visit to the pyramids in Giza.

The pyramids are at the back.
A trip nearby the place of supervision [police station where he has to spend the night] because of the [lack of] time.

On April 6, using the hashtag نص_حرية# [14] (“half freedom” in English) he posted [15] a photo on Instagram, taken from his seat on a motorcycle. He explained that in order to arrive to the police station on time each night, he travels by motorcycle so he can avoid traffic.

Shawkan’s story is not unique in Egypt. Prominent Egyptian blogger and activist Alaa Abd El Fattah, who was released [16] from jail on March 28, is also under a similar probation period. Alaa spent five years in jail for defying a protest ban, and like Shawkan, he has to spend the night at a police station for the next five years.

Alaa has also been reflecting on life under probation.

“I am happy to see your joy over my release, but I am unfortunately not free,” Alaa wrote [18] on Facebook days after his release. “Every day I surrender myself to a humiliation called [police] monitoring.”

Alaa’s sister, Mona Seif, who is also a human rights activist, likened [20] the conditions of her brother’s imprisonment every night to “solitary confinement”.

Alaa has to turn himself in to Dokki police station every day at 6 pm and they let him go at 6 am.

When he turns himself in, they keep him isolated from all others in a small wooden kiosk within the police station. They lock him in for 12 hrs.

These are worst conditions than the ones he had to endure in prison for five years. Alaa is practically now spending half his day in solitary confinement in the police station, and he is looking at five years more of this nightmare

Alaa has also learned that speaking out against these conditions can pose a risk of additional jail time. On the night of April 9, security officers threatened [21] to throw him back in jail if he keeps exposing the conditions of his probation.

Ahmed Maher, a political activist with the April 6 Youth Movement, spent three years behind bars for illegal demonstration. He was released [22] in January 2017 and placed [23] under police monitoring a period equal to the amount of time he spent in jail. On Twitter, he described the conditions of this period:

Under police monitoring, where we sleep is much dirtier than in prison and there is more arbitrariness, even though according to law, they do not have the right to imprison us in a police station or to deprive us of our children, our work, our studies and our normal lives. According to law, monitoring should be more gentle and more humane, but it is clear that the motivation is nothing but a desire to abuse and humiliate.

This practice of locking former prisoners overnight is an abuse of power. According to legal analysts [26] and human rights NGOs, those placed under monitoring are supposed to be able to spend the night in their homes. Only those who are without a place to live in the area of their local police station, are required to spend the night in official custody.

After an individual is sentenced to a probation period decided by the judge at sentencing, the law empowers the sentenced individual to designate a residence at which to serve his or her probation period. However, the law additionally authorizes authorities to select a location for probation if no residence is provided, as well as to determine whether or not a location selected by the defendant is appropriate for police surveillance. This discretion has been used [28] to systematically erode the right of individuals to complete their probation periods at their stated residence—a right guaranteed to them under law—and instead force individuals who have residences where police surveillance can clearly occur to spend them at police stations.

Yet at the end of each day, many Egyptians are forced to retreat to a small cell in a police station, away from their loved ones and the rest of the world: they are out of prison, but not really free. Many are activists, protesters and journalists, whose only crimes were to exercise their fundamental rights to freedom of expression, assembly and protest.