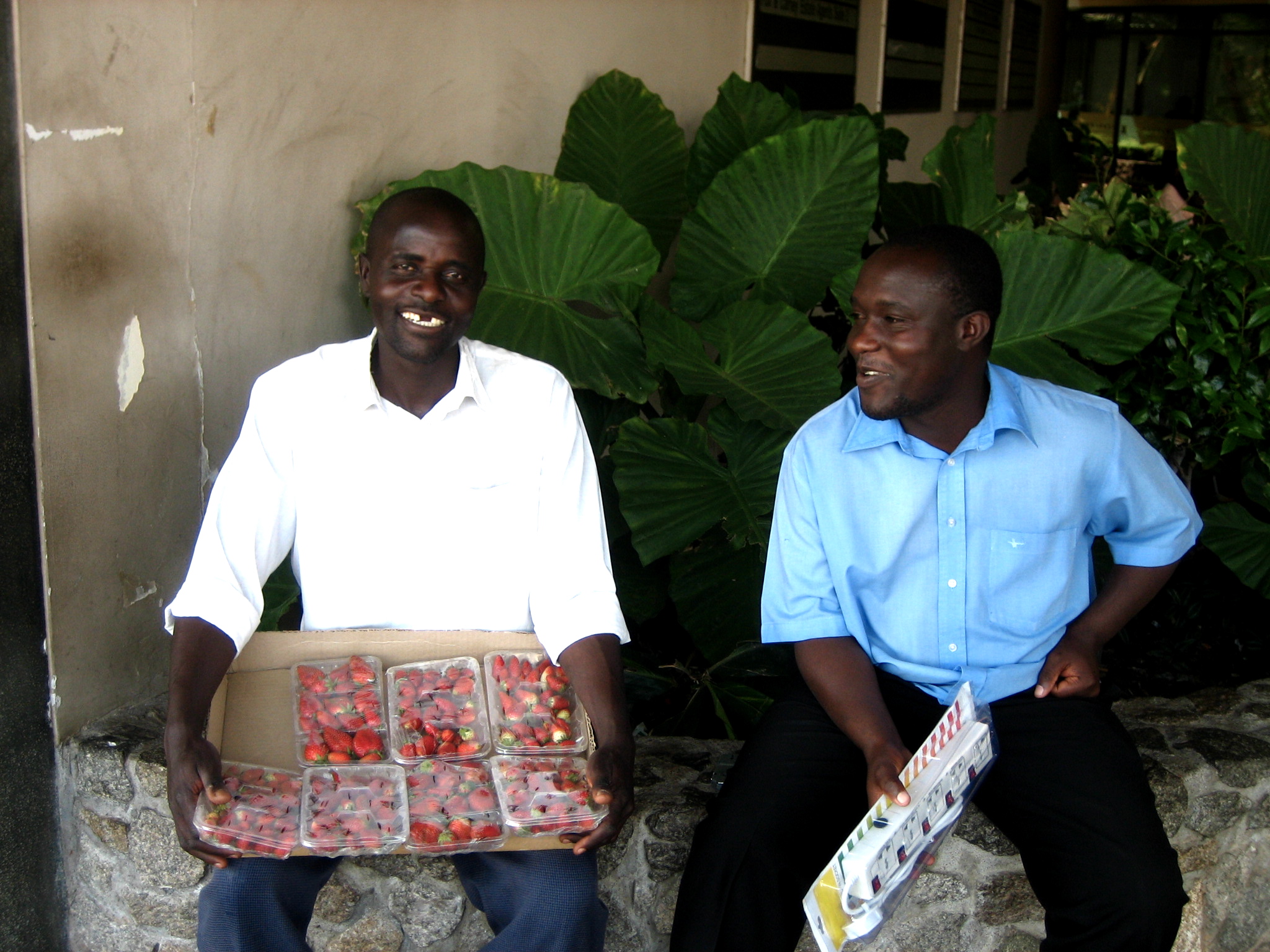 Zimbabwe's January internet disruptions sent a chilling message to citizens that internet access is a favor, not a right. Here, two men in Harare, Zimbabwe, rest on a ledge mid-day. Photo by Ethan Zuckerman via Flickr, CC BY-NC 2.0.

When protesters took to the streets of Harare, the capital, to speak out against the dramatic 150 percent fuel price hike,  [1]the military responded with a brutal clampdown that took many by surprise. Clashes left scores of protesters injured or tortured and at least 12  [2]dead.

As activists turned to social media to mobilize the protests and draw attention to Zimbabwe’s deteriorating economy [3], President Emmerson Mnangagwa's administration responded with restricting access to social media and entire networks in certain areas of the country on the grounds of national security [4].

Between January 14-21, citizens had difficulties accessing their bank accounts or communicating effectively with friends and family. All businesses and shops shut down as soldiers patrolled the streets.

The government issued directives [5] from the president's office, channeled through the Postal and Telecommunications Regulatory Authority of Zimbabwe (POTRAZ) toward mobile and fixed telephony companies to restrict access to entire networks until further notice.

According to Netblocks internet shutdown observatory, the January disruptions [6] included total network shutdowns that took Bulawayo, and Harare, the capital, offline, and restrictions on access to social media platforms and messaging apps including Facebook and Whatsapp.

The disruptions were partially lifted [7] a few days later, but a ban on accessing certain social media services remained until it was lifted [8] on January 21, hours after the country’s High Court deemed the ban ‘’illegal’’.

Zimbabweans now live in fear that a shutdown can happen again at any time on the government’s whim; authorities seem to view digital rights as a favor granted to citizens rather than a constitutional right.

While Mnangagwa's administration made a public commitment [9] to opening up the media, he seems to follow in the footsteps of former President Robert Mugabe, who was also intolerant [10] of freedom of expression and freedom of information before the military deposed [11] him in November 2017 — effectively ending his 37-year rule.

Government officials have repeatedly described access to social media as a potential threat, hinting that similar actions to the January shutdown would not be ruled out.

In fact, in the aftermath of last January's disruptions, Energy Mutodi, the Deputy Minister of Information, Publicity and Broadcasting Services, said [12]that the government would not hesitate to shut down the internet in the future, referring to citizens as “primitive people (…) who don’t understand the meaning of peaceful demonstrations.”

In early July, the Minister of Information Communication Technology, Kazembe Kazembe, issued [13] a warning on what he termed abuse of the internet and social media in The Herald:

On paper, Zimbabwe is a signatory to various international and regional protocols committing states to safeguard and promote freedom of expression including the International Covenant on Civil and Political Rights (ICCPR) and the African Charter on Human and Peoples’ Rights. Zimbabwe is also committed [14]to the Southern African Development Community (SADC) Protocol on Culture Information and Sport, which deals with information availability, infrastructure, freedom of media and code of ethics.

Such statements by government officials demonstrate the fragile state of digital rights in Zimbabwe, activists said.

Internet Society of Zimbabwe chapter president, Solomon Kembo, pointed out that the disruptions experienced are an indication that ”the authorities would violate digital rights in future if they sense a security threat as a result of protests”.

”The fact that the government was compelled to lift the ban on a technicality and not on the basis of infringing [upon] digital rights gives credence to the assertion that in the future, the government will possibly issue another blanket internet shutdown using the ‘correct’ office”, he told Global Voices in an interview.

The technicality is based on Zimbabwe's High Court ruling [8] that the state security minister had no authority to order mobile operators to restrict internet access to customers during the January 2019 protests. Internet services were restored after this ruling.

“The shutting down of the internet in January this year set a bad precedent which will ensure this continues to happen in the future. Digital rights are being thwarted in Zimbabwe,” Fidelity Mhlanga, a journalist with the Zimbabwe Independent told Global Voices.

The Zimbabwean government continues to push for measures that would tighten its control over the internet.

In March 2018, Mnangagwa launched [15] the National Policy for Information and Communications Technology, initially introduced by Mugabe’s administration in 2015, which sets out to centralize control over the country’s internet backbone.

There are five mobile service providers: privately-owned Econet and Africom, and state-owned TelOne, Telecel, and NetOne. Econet dominates the mobile data traffic holding 65 percent of the customer market share as of early 2018.

Currently, the ICT market in Zimbabwe is diverse with various privately-owned service providers. However, the government maintains some level of control [16] over the market through its ownership of two international gateways for internet traffic and three out of the five mobile service providers operating in Zimbabwe: TelOne, Telecel, and NetOne.

In addition, the government asserts its control through POTRAZ, a government parastatal tasked with the regulation of telecommunications and postal services, including the internet. This means they depend on the government for directives.

During the disruptions, these companies all operate under orders from POTRAZ to terminate internet services. Media and ICT consultant Koliwe Majama noted that it remains a matter of concern that privately-owned Econet, the largest mobile telephony and internet service provider, is always quick to abide by any directives to shut down the internet, especially when they government-issued.

If the Mnangagwa administration moves forward with its National Policy for Information and Communications Technology, it will only further assert state control over the ICT market, making it easier for the government to order and impose internet disruptions and restrict access to the internet and mobile networks. In a 2018 Freedom on the Net Report, Freedom House noted [17]:

Section 7 on ‘ICT Infrastructure’ details plans to establish a single national ICT backbone to be owned by various public and private shareholders but ultimately controlled by the government. The section also mandates infrastructure sharing among telecoms, which private telecoms that have invested heavily in their own infrastructure have decried as a form of ‘backdoor nationalization.’ Most troublingly, Section 23.3 creates ‘The National Backbone Company,’ defined by the document as ‘one Super Gateway’ which shall be the entry and exit point for all international traffic.

Additionally, Mnangagwa's administration is pushing [17] for the legislative enactment of the Computer Crime and Cybercrime Bill, which will place restrictions on freedom of expression online —  if successfully passed. The bill was first introduced in August 2015. Its third edition, published in 2017, contains vague provisions that would greatly restrict freedom of expression online if adopted.

For example, Section 16 penalizes the dissemination of communications “with intent to coerce, intimidate, harass, threaten bully or cause substantial emotional distress” with a fine, prison of up to 10 years, or both. Section 17 penalizes the spread of false information “to cause psychological or economic harm” with fines, up to five years in prison, or both.

Zimbabwe has one of the most expensive mobile data [18] in the world. Between October 23 and November 28, 2018, 1 gigabyte cost $75 USD per month, way beyond the reach of ordinary working Zimbabwean citizens who on average earn $50 USD [19] per month.

The Mnangagwa administration's ICT policies and strategies are bound to further thwart Zimbabweans’ right to access the internet: It will make it harder for citizens to express themselves and access and exchange information online, particularly with disrupted internet access.

For Mhlanga, the Zimbabwe Independent journalist, awareness-raising is key in the battle for an open and free internet in the country.

“I strongly believe digital rights are just as important as socio-economic rights. However most Zimbabwean citizens are not aware of their digital rights thus the need to raise awareness going forward,” he said.