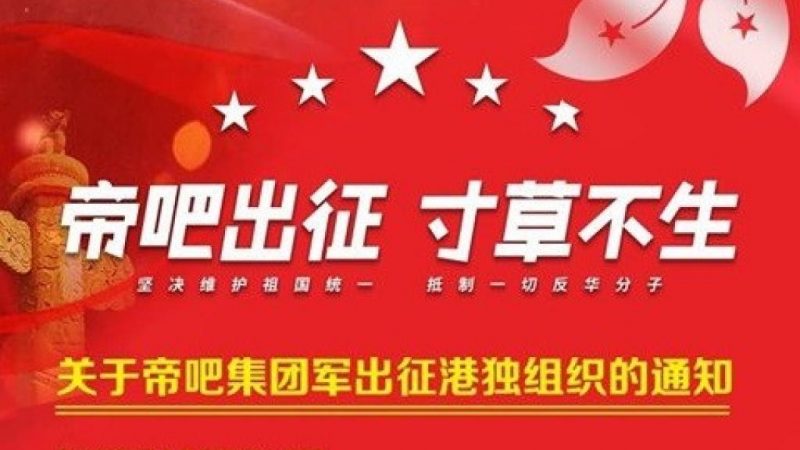 Screen capture from Diba's call for support on Facebook.

On 22 July, Diba forum admins began calling for an “expedition” into Hong Kong anti-extradition platforms after anti-extradition protesters threw an ink-bomb on the national emblem outside China’s Liaison Office in Hong Kong. Diba administrators said that the mission was to counter Hong Kong independence and to show support for the Hong Kong police. To assist them, the administrators recruited about 12,000 netizens and prepared a large number of online stickers.

On 23 July, they flooded Facebook and left pro-China comments on pages run by Hong Kong democracy organizations such as Civic Human Rights Front.

However, the Diba trolls were soon to find out that they could not enter LIHKG as the forum required a local ISP email to log in and leave messages. Worse still, Diba’s administrators then discovered that their real identities and private information had been exposed and posted on a group chat in LIHKG’s mobile app.

LIHKG users then made use of the expedition leaders’ identities to get enrolled in the People Liberation Army.

On 24 July, Diba’s administrators surrendered and posted a message on Weibo calling for a halt to their original plan:

To protect all of your personal privacy and safety and causing trouble, the management team has decided to dissolve the online army group. The management team expressed our deep apology to the leak of personal data due to the action on July 22.

Diba has organized several missions to spread patriotic messages outside the Great Firewall. The most well-known of these took place in 2015 during the Taiwan presidential election. The Diba troll army has a motto to boost their spirit in the online battle, “Wherever Diba’s expeditionary force reaches, not even a blade of grass can be spared”.

Their defeat was widely discussed on Chinese social media with many users taking the opportunity to laugh at the expense of the Diba admins. Xiakedao, a famous People’s Daily’s commentator could not help but poke fun at the amateur online army. He wrote “defeated without entering into a fight” (出師未捷身先死） and added a “laughing to death emoji”.

Diba’s plan to troll anti-extradition platforms is reflective of the online patriotic sentiment which is also echoed by the Communist Party-backed rappers, CD REV ‘s newly released music video, “Kung Fu China”. The rap song suggests the use of Chinese kungfu to defend the dignity of the motherland.

This idea seems to have traveled as far as Australia. On 25 July, a group of pro-China students clashed with pro-Hong Kong protesters at the University of Queensland during a solidarity rally in support of the Hong Kong anti-extradition protests.

As Hong Kong's anti-extradition campaign has a strong international front, similar conflicts may emerge in other parts of the world.