On July 18, two Ethiopian protest groups clashed in front of the Ethiopian embassy in Washington, DC, in the United States, as Ethiopia’s tense national politics spread to its diasporas.

Demonstrators got close enough to hurl insults at each other.

But this real-life confrontation pales in comparison to the intense, bitter political agitation taking place in every corner of Ethiopian social media, and especially on Facebook. Ethiopians use Facebook more than any other social media platform and many citizens consider Facebook to be the “internet.”

Since last year, Ethiopia has undergone a much-lauded transition from dictatorship to democracy. Many Ethiopians embraced the transition spearheaded by Prime Minister Abiy Ahmed. But the euphoria accompanying Ethiopia’s embrace of civil liberties has deflated as political rifts resurfaced between non-ruling elites of Ethiopia's two main ethnic groups: the Amharas and the Oromos.

These widely shared videos shape and inform the current discourse on Ethiopian politics, both at home and among its large diaspora, often exchanging and amplifying mis- and disinformation originating with these videos.

Almaz, an Amhara anti-government protester who is using a pseudonym to protect herself from abusive attacks online, was one among the incensed crowds at the Washington D.C. demonstration. Her experience of social media organizing and agitation is typical of many of the other protesters. She first heard about the anti-government demonstration via Facebook and follows a range of anti-government activists on the platform.

Since she moved to the US in September 2018, she has been using Facebook to follow the news from home — especially Facebook’s live streaming services.

Almaz and her friends use the newsfeed to both signal interest in certain stories and to coordinate watch parties, in which like-minded viewers gather online to watch popular live streams. She often joins parties to watch Yoseph Yitna, a conspiracy theorist who broadcasts daily from abroad about Ethiopian politics.

As part of its democratic reforms, the new government stopped blocking websites from Ethiopian diaspora opposition groups and ended politically-motivated content filtering. It has decreased surveillance and harassment of journalists and opened up the telecom market. In the absence of developed local media institutions, Facebook has become the primary portal for news and information for Ethiopian internet users.

For every political development, a fresh set of broadcasts appears, mainly on Facebook and increasingly on YouTube in Amharic and Afan Oromo.

Manga launched his rage brand of social media in 2015 and regularly offers inflammatory comments ranging from current political events to religion to pop culture in Amharic language. His tagline reads “Thanks to the Mother (Mary) and Her Son” and he describes himself as a truth-advocate for Ethiopians. His Facebook page has a significant and engaged audience. At the moment, he has about 161,000 followers and his YouTube channel has been viewed more than 29 million times. On a typical show, he talks for nearly an hour and bounces from topic to topic. He shouts, feigns menace, and insults his critics with ethnic slurs that target various ethnic and religious groups.

Almaz also watches dozens of Facebook live videos by Tolosa Ibsa, a Facebook conspiracy theorist whose YouTube channel has been viewed more than 11 million times. Gigi Kiya, a commentator who also trolls her opponents, garners about 10 million views on her YouTube channel.

These formerly fringe Ethiopian social media figures have benefited from Ethiopia’s new opening. They are mostly diaspora-based monologuists broadcasting from their living rooms, complaining vigorously about the Ethiopian government, and attacking each other. Facebook is their headquarters, although some have migrated to YouTube, to monetize their work through ads.

The comment sections of Facebook live broadcasts from these figures fill with people throwing insults and memes at each other.

Over the past few weeks, Almaz incessantly shared Facebook Live video links and posts about an incident that happened in June 2019 in Amhara, Ethiopia's second-largest region. On June 22, an armed group murdered the region’s president along with his adviser and the region's attorney general in an alleged failed regional coup attempt. General Asaminew Tsige, chief of security forces in the Amhara region, commanded the armed group. This incident was triggered by a simmering intra-party dispute in the region’s governing party, Amhara Democratic Party (ADP).

On Facebook, rumors swirled that the assassinations were part of a plot created by Prime Minister Abiy Ahmed, who is an Oromo, to wipe out the leadership of the Amhara people. 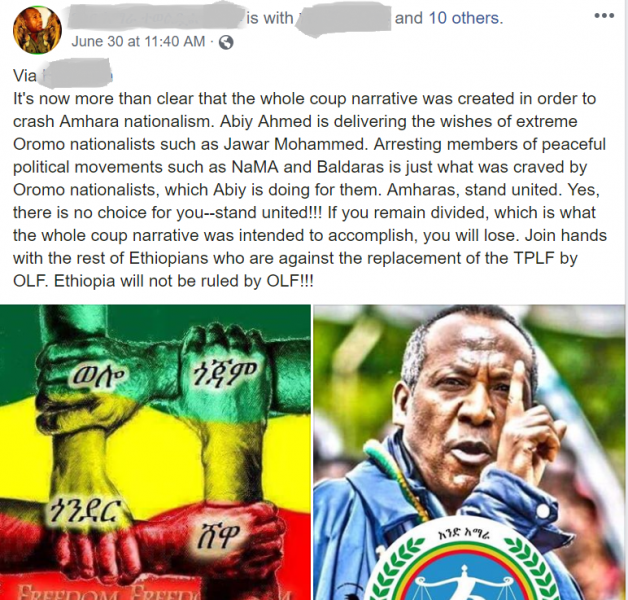 One of the unsubstantiated claims about the assassinations of the three leaders of the Amahara Region Almaz shared on her Facebook page. The picture on the right is General Asaminew Tsige who allegedly led the coup before he himself was killed.

Another pro-government protester at the DC rally, who uses the name Yoseph, just returned to the US following a visit to Ethiopia after 15 years of exile.

Like Almaz, Yoseph heard about the demonstration on Facebook, but from a completely different universe of Facebook live video broadcasters. For his daily media diet, Yoseph usually visits the Facebook pages of Ambo Urge and Hangaasa Ahmed Ibraahim, two fervent supporters of Ethiopia’s prime minister who broadcast unsubstantiated claims about people who do not support him. They regularly bash citizens who oppose Abiy as settlers who are nostalgic for Ethiopia’s pre-1974 imperial era, where Ethiopians were merely considered as ”a collection of imperial subjects” rather than citizens. Yoseph shares videos that exaggerate Abiy's heroism and spreads rumors about his rivals. 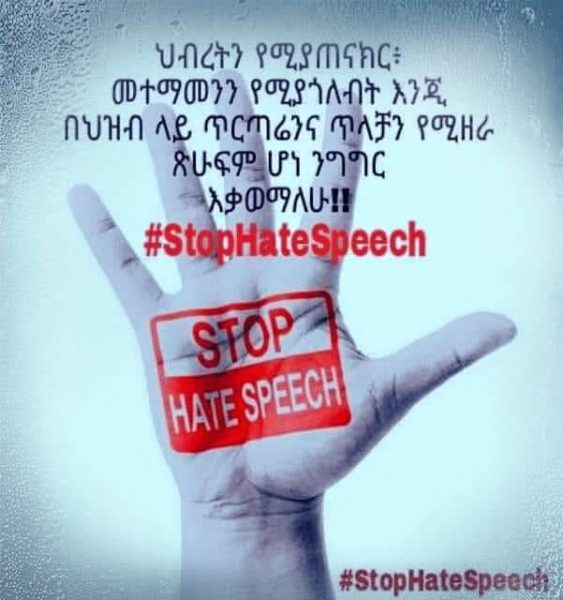 Earlier in July, activists and concerned Ethiopians began a social media campaign to limit misinformation and hateful content on Facebook. They flagged violent content to Facebook and encouraged others to report them using Facebook’s on-site reporting tool. One activist who asked Global Voices to remain anonymous says he flagged content that ranges from bigoted memes to inflammatory videos, yet most of the content he reported remained on Facebook. For example, he reported a YouTube video of an ethnic extremist who threatened to kill Amharas and their children who live in Oromia. The truncated version of the video was still circulating on Facebook at the time of publication of this article.

A Twitter user flagged another ethnic extremist who called on Facebook for Amhara women to poison their Oromo husbands to wipe out the Oromos.

In this video, this man speaking in Amharic calls for a genocide against ethnic #Oromo. He is appealing to all Amhara wives who are married to Oromo men to poison their husbands. I’m only translating his message for the world to see it. @BBCAfrica @USEmbassyAddis @hrw #Ethiopia pic.twitter.com/YxotYfXjty

These are just a few examples of the estimated hundreds of thousands of hours of videos streamed in at least five major Ethiopian languages. Activists are frustrated that most malicious content flagged is not removed, leaving them to wonder if Facebook cares about the damage it might be causing in Ethiopia.

Facebook has recently employed an Ethiopian as one of its market specialists for sub-Saharan Africa. According to Facebook, markets specialists ”play a key role within the global community operations team by keeping the platform safe, vibrant and diverse.”

However, it is not clear if the employee's responsibilities include content moderation of Amharic videos. It also remains unclear whether Facebook and other platforms are investing enough resources to address problematic content in Ethiopia such as disinformation and hate speech.