'His arrest is a travesty and violation of fundamental rights' 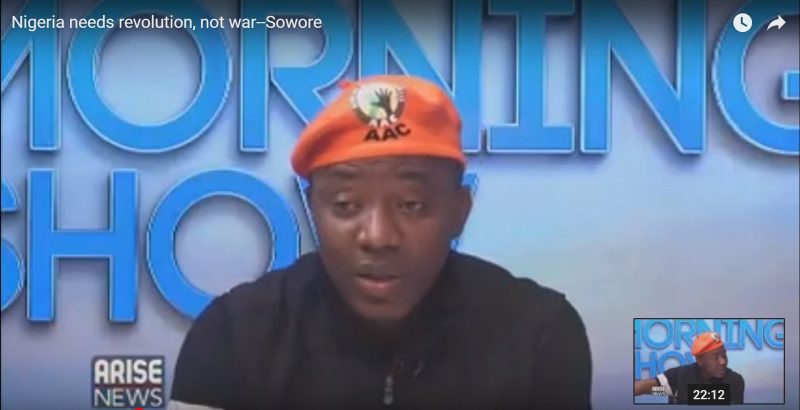 Screenshot of Omoyele Sowore from this YouTube video “Nigeria needs revolution, not war”

On August 3, the Department of State Services (DSS), a unit of Nigeria’s State Security Service, arrested human rights activist Omoyele Sowore in his residence in Ikeja, Lagos. Prior to his arrest, Sowore was calling for a “#RevolutionNow”, a nation-wide protest against bad governance. Security agents stormed Sowore’s home around 1:30 a.m. and arrested him “after a bit of altercation” according to an eye witness, who spoke to the Abuja-based online newspaper Premium Times.

Sowore, the publisher of the investigative online newspaper Sahara Reporters, was one of the presidential candidates in the 2019 Nigerian elections held on February 23 this year. Sowore got about 33,000 votes, trailing a distant 10th place to the winner and incumbent president, Muhammadu Buhari, who garnered 15 million votes.

He was detained under Section 27(1) of the Terrorism Act 2011 which grants the DSS the right to detain anyone planning to “commit an act of violence”. If charged and convicted, he could risk life imprisonment, fine or both.

‘We have the right to be in a rage’

In a July 18 interview with Reuben Abati and Tundun Abiola of Arise News channel, Sowore said that “Nigeria needs revolution, not war.” He explained that he started this campaign because “the government has failed. Nigeria has failed as a state and until we take that necessary big step – not next level – Nigeria will not attain its potentials.” Therefore, he is “mobilizing people around Nigeria to come and do it one time.”

Consequently, on July 27, Sowore and the Coalition for Revolution (CORE) movement he started, declared their intention to hold nationwide protests on August 5, 2019:

There are currently more than a dozen armed conflicts going on around the country with deadly consequences and massive displacements of people. These confirm the reality that Nigerian is tending more towards a FAILED STATE where barbarism reigns supreme… the Coalition for Revolution, would be leading a nationally coordinated protest movement. We have the right to be in a rage and to protest.

The #RevolutionNow protest was still held on August 5 despite Sowore’s arrest and detention. The protests took place in four states – Lagos, Osun, Ondo and Cross River – and in Abuja, Nigeria’s capital.

However, soldiers and the police forcefully dispersed protesters in Lagos with gunshots and teargas canisters. A journalist covering the protest was also manhandled by the police.

Is incitement to revolution ‘treason'?

DSS spokesperson Peter Afunanya said that Sowore was arrested because his call for revolution could result in a “forceful takeover of government”:

Similarly, presidential spokesman Shehu Garba said in a statement that there is a “difference between a peaceful call to protest and incitement for a revolution.” The government further stated that “the ballot box is the only constitutional means of changing government and a president in Nigeria. The days of coups and revolutions are over.”

Nigerians, however, disagreed. Online, a number of activists maintained that a call for “revolution” was not treasonable and pointed out that leaders of the ruling party have themselves previously called for revolution.

In 2011, President Muhammadu Buhari called for a revolution, when he encouraged Nigerians to learn from the Egyptian Arab Spring protesters. At that time, Buhari even lead a protest against then-incumbent President Goodluck Jonathan in 2015.

This was buhari and co staging protest against the Jonathan Administration, but he the tyrant is scared of a peaceful protest… They arrested Sowore, your clueless administration is only giving him more power and popularity… .#FreeSowore pic.twitter.com/fiTwJA81Wv

Similarly, Bola Tinubu National Leader of the ruling All Progressive Congress also called for a revolution in 2014.

Dissent and the rights to protest and assembly are key to enabling citizens’ democratic participation. In addition, the term ”revolution” has previously been used by activists and politicians in Nigeria to express their frustration with governance and mobilise protesters and popular support for their causes.

Online, several activists and writers came to Sowore's defence and supported his right to dissent.

If arresting critics solves problems Africa should be the most highly developed continent in world. But it is not and the coconuts don’t see it. Matter of fact dissidents and critics are useful assets in society. In challenging status quo they invent/create new products/solutions https://t.co/TtnfjVyzUR

But “Sowore has not stoned anybody; he has not wielded a knife,” retorted human rights activist Chidi Odinkalu:

Democracy doesn't run like this. You run a democracy based on disagreement & dialogue. Sowore has not stoned anybody; he has not wielded a knife. He doesn't carry a gun. He's killed nobody. He just wants to do a demonstration. Let the man go. U don't have to agree with him. pic.twitter.com/zo7rqCKvyy

Nigerian human rights lawyer Femi Falana dared the government to show him which “section of the Nigerian Constitution that finds Sowore guilty of treason”:

Femi Falana is asking the Nigerian government to tell him the section of the Nigerian Constitution that finds Sowore guilty of treason. He also has a sub for someone we all know. #RevolutionNow #FreeSowore

However, the most scathing condemnation to Sowore’s arrest came from professor Wole Soyinka, the winner of the 1986 Nobel Prize in Literature. Soyinka described the arrest as a sad déjà vu of his experience under Nigeria’s late military dictator, Sani Abacha:

Beyond the word ‘revolution’, another much misused and misunderstood word, nothing that Sowore has uttered, written, or advocated suggests that he is embarking on, or urging the public to engage in a forceful overthrow of government. I therefore find the reasons given by the Inspector-General, for the arrest and detention of this young ex-presidential candidate totally contrived and untenable, unsupported by any shred of evidence. His arrest is a travesty and violation of the fundamental rights of citizens to congregate and make public their concerns. This is all so sadly déjà vu. How often must we go through this wearisome cycle? We underwent identical cynical contrivances under the late, unlamented Sani Abacha. And yet again, even a faceless cabal under yet another civilian regime refused to be left out of the insensate play of power.

On August 8, an Abuja court granted an application to keep Sowore in “custody for only 45 days” for Nigeria’s security service to “conclude its investigation.”