Who turned off Moscow’s internet during recent protests? 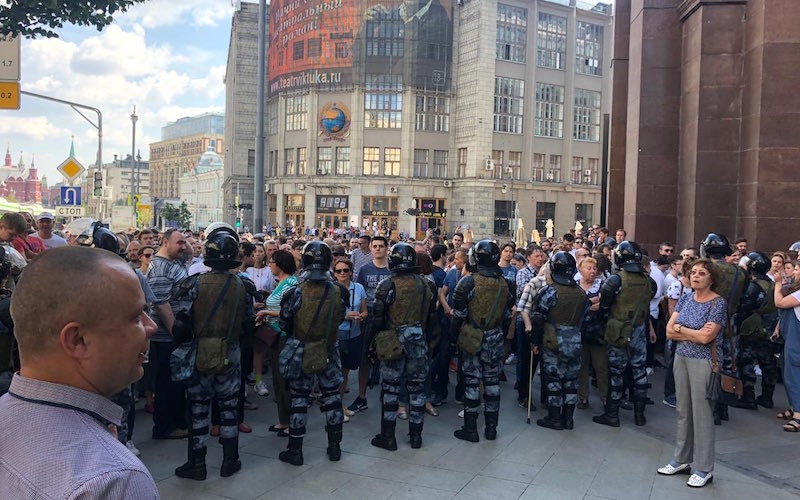 The situation in Moscow remains tense after renewed protests; thousands have taken to the Russian capital’s streets and squares in recent months to oppose the electoral commission’s refusal to register opposition candidates for local elections this September. The latest demonstration on 3 August saw over 1,000 people detained and police violence towards demonstrators. Over the following week, the Russian authorities launched a money laundering case against opposition politician Alexey Navalny and froze bank accounts associated with his Anti-Corruption Foundation (workplace of several of the most prominent opposition candidates.) The kid gloves are off, if they were ever on to begin with.

There are many indications that this crackdown has reached cyberspace.

Several people present in central Moscow on 3 August and on 27 July stated that they had encountered difficulties getting online, complaining that mobile internet was either extremely poor quality or completely unavailable. As similar stories mounted, it became clear that this wasn’t a glitch, but an attempt by the authorities to get part of the capital offline for the duration of the protests.

The move irritated one Muscovite who preferred an afternoon at home rather than at a protest:

“Rostelekom came up with a great idea; let’s reduce internet speed on a rainy weekend. Thanks guys, now I can neither play nor watch videos.”

Mikhail Klimarev, an expert on digital rights who works for the Internet Protection Society NGO, stated on 5 August that he was sure the move was the result of an order from above; two of the city’s four largest mobile service providers on 3 August were switched to GSM-only functions, allowing calls and text messages but not internet access. The Internet Protection Society’s interactive map of base stations affected by the internet blackout shows an area of about 13 square kilometres affected in central Moscow. This northern area of central Moscow was where the protest on 3 August was held.

One blogger found that wifi networks in the area had also been switched off:

“I ran into Shokoladnitsa [a popular Russian café chain] for a coffee; I thought that there’d be internet there, but the waitress said that the police had demanded the internet to be turned off in all cafes for the day.”

From 1 p.m., an hour before the scheduled start of the protest in Moscow, users started reporting internet shortages in this area of Moscow. NetBlocks, an NGO monitoring digital governance, found “anomalous” disruptions in internet connectivity via Rostelekom, Russia’s largest internet and telephone service provider, in a pattern it identified as generally consistent with a deliberate shutdown.

Comments from Russia’s internet and telephone service providers raise even more questions. On 6 August, Megafon, a mobile service provider, told Radio Svoboda, RFE/RL’s Russian-language service, that connectivity problems were the result of large amounts of people than usual using the network (Megafon gave the same explanation to independent newspaper Novaya Gazeta when it reported on similar connectivity problems during protests on 27 July.)

Klimarev told Radio Svoboda in response that Megafon’s explanation was unfeasible given that in other parts of the city, where the local administration had put on a large kebab festival on the same day as the protests, there were no problems with connectivity despite the large number of attendees. It is also important to mention that the networks’ explanations are at odds with accounts from the authorities, given that the Russian police continue to insist that only 1,500 people attended the protest on 3 August (independent estimates put the number of protesters at three times that.)

Commentators on the “blackout” frequently seem surprised at the relative ease of forcing a section of the city offline; not a difficult task, given that service providers in Russia cannot afford not to comply with such requests. In fact, while mobile networks are obliged to provide users with the services they pay for, including mobile internet access, Russia’s law enforcement agencies do have legal remit to override these concerns. These powers can be found in Articles 11 and 12 in Russia’s law on states of emergency, as well as in article 64 of Russia’s federal law on communication. The latter states that if mobile networks receive a letter from law enforcement agencies demanding that they cut their services in the names of “operational activities” or public security, they are obliged to comply.

The content of these letters are generally not public. However, on 6 August the BBC’s Russian service reported that it had obtained a copy of a letter sent to employees of a call centre for one of Moscow’s largest mobile networks. “Dear colleagues, in the Presnensky and Basmanny districts of central Moscow, some of the base stations have been disabled at the request of law enforcement agencies,” the letter read. It then went on to give detailed instructions about how to respond to customers‘ complaints and enquiries, instructing employees to simply say that there “had been no difficulties in providing services on the company’s part.”

While this is the first time a state-imposed internet blackout has been observed in Moscow, it is not the first in Russia. That dubious distinction goes to Ingushetia, a republic in Russia’s North Caucasus region. Since October 2018, Ingush have held protests against a decision to transfer some of the republic’s land to neighbouring Chechnya. Attendees of the first protests in October also found that three major mobile services providers had closed down their internet access for two weeks; renewed reports of this surfaced during protests in March this year. Nevertheless, 2G mobile internet remained accessible in Ingushetia, though its slowness would have precluded the widespread use of social media for protest participants to communicate with each other.

The shutdown of the mobile Internet, first tried during last Fall protests in Ingushetia, now is testing in Moscow. #soveregnInternet https://t.co/HWM33GCYOH

But some of Ingushetia’s protesters are fighting against their role as test subjects for future internet blackouts. Murad Khabziyev was one of several protesters in Ingushetia’s capital of Magas who attempted to take the authorities to court over the blackout in early October. While Khabziyev’s case was ultimately dismissed, it did provide an insight into the bureaucracy of such internet shutdowns. Aslan Kokoyev, the local head of Roskomnadzor, Russia’s state communications watchdog, argued in November 2018 that the shutdown had been perfectly legal as the three large service providers involved had received a letter from “a law enforcement agency” as mandated by Russia’s law on communications.

On 3 August, the Russian human rights defending NGO Agora announced that it would demand an official investigation into the removal of internet access in Moscow on 3 August. They may have to hurry up; in November, Russia’s controversial “sovereign internet” bill will enter into force. That could make it even easier for the authorities to turn off the internet at the flick of a switch.

Further protests are the horizon in the Russian capital; if the authorities believe their strategy has worked, mysterious internet outages could repeat themselves. And time will tell if the unconnected remain as undeterred.