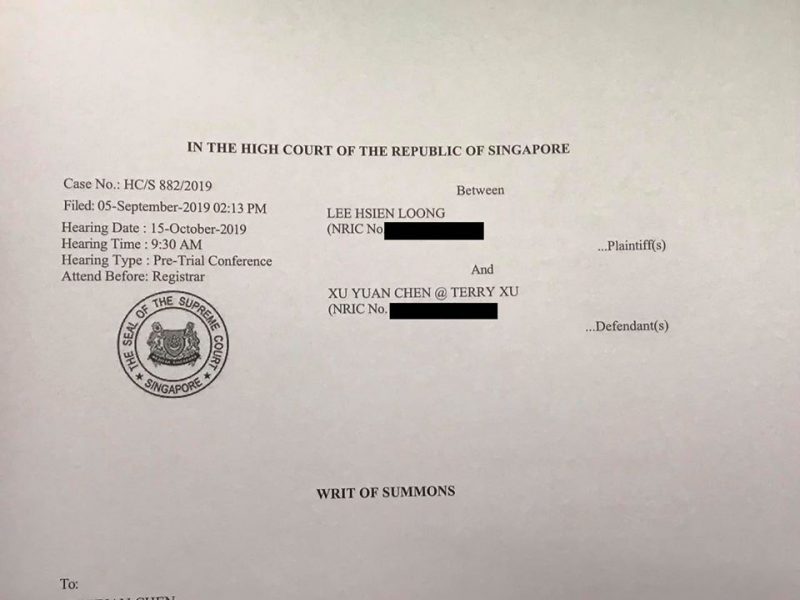 A copy of the writ of summons issued to The Online Citizen chief editor Terry Xu. Source: Facebook page of TOC

Singapore Prime Minister Lee Hsien Loong is suing Terry Xu, chief editor of independent news website The Online Citizen (TOC), for defamation in relation to a news article published by the latter which tackled the leader’s public feud with his siblings. Critics said this is another example of the government’s harsh treatment of independent media and other groups which report about dissenting views against the country’s authorities. In Singapore, defamation is an offense that carries a maximum penalty of a two-year prison sentence and a fine.

On 15 August 2019, TOC published an article titled “PM Lee's wife, Ho Ching weirdly shares article on cutting ties with family members”, which was also posted on Facebook. It notes the irony of Ho sharing an article about toxic family members:

Although there’s nothing particularly wrong with the article and the points raised by the author, but the irony of Madam Ho sharing the article is what’s interesting and amusing to us. This is because everyone knows that she has a sour relationship with her husband’s family members – particularly her brother-in-law Lee Hsien Yang (LHY) and sister-in-law Dr Lee Wei Ling (LWL).

The TOC article quoted previous public statements by LHY and LWL who accused their brother of going against the wishes of their late father, Singapore’s first Prime Minister Lee Kuan Yew. LHY and LWL said their family house at Oxley Road was supposed to be demolished after the death of their father in 2015 but they claimed that their brother wanted to keep the house intact “to inherit (Lee Kuan Yew’s) credibility”. The prime minister denied this and told the parliament in 2017 that his father was open to how the property would be preserved or developed for the public interest.

On 1 September, Sunday, the prime minister’s press secretary Chang Li Lin sent a letter to Xu asking him to remove the article from the TOC website and Facebook page since it “contained statements that are false and baseless and were calculated to disparage and impugn PM Lee as well as his office as the Prime Minister.” The letter stated that the article repeated “several false allegations against PM Lee” that were previously made by his sister. The letter also explained why the prime minister is demanding an apology from TOC and why he is pursuing legal action on this matter:

PM Lee’s restraint in suing his siblings should not be misinterpreted by others as free licence to repeat and spread false and defamatory allegations against him, as the Article and Post have done. He has to rebut and deal publicly with such scurrilous attacks on his integrity and character, if necessary through legal action. This is especially as such attacks are also directed at his fitness to hold office as Prime Minister and to lead the Government.

TOC responded by removing the article on its website while reviewing the implications of the letter they received from the prime minister. But they restored the article and asserted that it is not defamatory and constitutes ‘fair comment’. Xu wrote back to the prime minister to explain his side, clarify some points in the article, and affirm the TOC commitment to speak truth to power.

Although I do fear that the cost stemming from the possible legal suit from you may be hefty, that is a price that I am willing to pay to not only uphold my principles, but also to uphold my obligations to Singapore and my fellow Singaporeans.

On 5 September, Xu was served a writ of summons by the prime minister’s lawyer. Xu has eight days to answer the defamation charge.

Some activists said this is a ‘crackdown’ on online critics. Journalist and activist Kirsten Han echoes the question of many commentators about the prime minister’s decision to run after other people who are merely repeating statements made by his siblings:

If the comments are so harmful to his reputation, why is he not suing his siblings and allowing their comments to remain up online? If those comments can remain publicly available, why is it that repeating them will attract a lawsuit claiming that one has harmed his reputation?

Filmmaker Lynn Lee questions the appropriateness of using the prime minister’s office in this legal case:

As a private citizen, Lee Hsien Loong can of course choose who he wants to sue. But as PM of Singapore, he shouldn’t have one standard for his family and another for the rest of us. And if LHL is acting in his personal capacity, he shouldn’t be using PMO resources. All this mixing of private and public is deeply disturbing.

This is not the first time that Xu and TOC face legal trouble because of their reporting on the government. In December 2018, they were charged for criminal defamation after they published a letter accusing top officials of corruption. The prime minister also previously sued bloggers who made ‘defamatory’ comments against him or shared Facebook articles that allegedly maligned his reputation.