As Sudan transitions to democracy, urgent reforms must tackle disinformation

Government disinformation was rife during the 2018-2019 Sudan protests 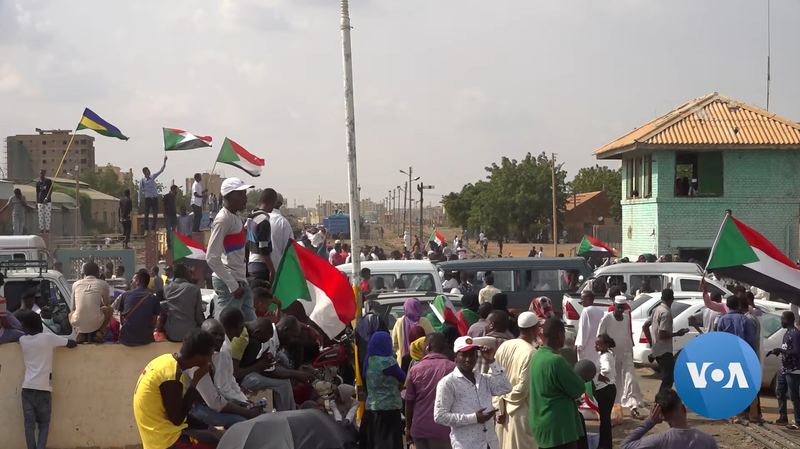 Sudanese protesters gather in front of government buildings in Khartoum, Sudan, to celebrate the final signing of the Draft Constitutional Declaration between military and civil representatives, August 19, 2019. Photo by Voice of America, public domain via Wikimedia Commons.

‘Fake news‘ became the word of the year in 2017 for a reason: The proliferation of online disinformation campaigns has made international headlines. Yet the spread of mis- and disinformation is not new and has existed long before the advent of the internet.

Sudan, a country embarking on a three-year-long transition toward civilian and democratic rule following a massive revolution that toppled the long-standing regime of Omar al-Bashir, is no exception. As Sudan transitions to democracy, it must address the former regime's legacy of disinformation tactics and limits to freedom of expression through urgent legal reforms.

In Sudan, government-sponsored disinformation campaigns have long impacted Sudanese people, with the goal to manipulate and exploit their perception, either to advocate for the regime's policies and figures or to attack dissenting protesters and opposition political parties.

Sudan's National Intelligence and Security Service operate the so-called Cyber Jihadist Unit, established in 2011. According to the 2014 Freedom of the Net report, the unit's tasks included “infiltrat[ing] online discussions in an effort to ascertain information about cyber-dissidents and spread disinformation”. Government-led disinformation was particularly rife during the 2019 protests calling for an end to al-Bashir's rule and the protests demanding a civilian transitional government in the aftermath of his removal from power.

More on mis- and disinformation during the Sudan protests

During the recent anti-government protests that sought an end to military rule in the government, journalists and activists documented several cases of mis- and disinformation such as manipulated photos, government-sponsored disinformation campaigns, and even fake accounts on Instagram that hijacked solidarity and donation efforts during the revolution.

The regime coordinated with the Russian company, M-invest, to spread rumors and fabricated news stories about anti-government protests during the revolution. According to documents reviewed by CNN, the company suggested spreading fabricated stories ‘’that protesters were attacking mosques and hospitals.’’  The company proposed a social media campaign claiming that “Israel supports the protesters.” Sudan has no diplomatic relations with Israel and it previously fought alongside other Arab countries in the Arab-Israeli wars of 1948 and 1967.

They also suggested to ‘’plant LGBT flags’’, which could have seriously threatened the safety of protesters and activists because homosexuality is not only illegal in Sudan, but also punishable by death.

War militias such as the Rapid Support Forces ( RSF) and military leaders also launched and orchestrated propaganda and disinformation campaigns. Days after the dispersal on 3 June by security and military forces of a sit-in calling for a civilian-led transitional government, an Egyptian company called New Waves started an influence campaign aimed at presenting and marketing for a good image for the RSF militia and its leaders.

More than 100 protesters were killed as a result of the crackdown on the sit-in, which later became known as the Khartoum massacre.

Criminalization of ‘false’ news: A threat to freedom of expression and press freedom

The former Sudanese regime waged its own campaigns to dis-inform the public and attack critics and passed laws to restrict freedom of expression and press freedom under the pretext of fighting rumors or false information.

Article 87 of chapter 12 of the 2018 Telecommunications and Postal-Regulation Act, prescribes a punishment not exceeding five years in prison or a fine or both for those convicted of spreading rumors deemed harmful to state security.

Article 66 of the Sudanese Criminal Act of 1991 states:

Whoever circulates, propagates any news, rumor or report which he knows to be false with intent to cause fear or alarm to the public or threat to public peace or undermine the respect of the State shall be punished with imprisonment for a term which may not exceed six months or with fine or with both.’

In July 2018, the Sudanese parliament approved a draft cybercrime law which prescribes a punishment of up to one year in jail against those convicted of spreading ”fake news” and rumours. According to the Beirut-based digital rights group Social Media Exchange (SMEX):

Article 23 of the new Cybercrimes Law imposes sanctions such as “imprisonment for less than one year, flogging, or paying a fine” for “anyone who uses the internet, or any means of communications, information or applications to disseminate any news, rumor or report, knowing it’s fake, to cause public fear or panic, threaten public safety and offence the reputation of the State.“

The bill was awaiting final approval before the regime was deposed. A transitional legislative council is expected to be put in place to approve new laws or repeal old ones.

These legal provisions were passed to curb ‘’fake news’’ in Sudan, yet they threaten press freedom and freedom of expression.

The vagueness and opacity of language and terms in these laws intentionally leave the door ajar for biased interpretations. For example, “undermining the respect of the State”, “threat to public peace” and “threat to state security” are vague terms that could be easily deployed to silence critics and journalists.

In August 2019, authorities convicted journalist Suhair Abdelraheem of ‘’spreading fake news’’  for “writing a sarcastic article about the Sudanese police.” In her opinion piece, Abdelraheem criticized the police for their lack of action against those who steal public funds and those involved in corruption cases. She was fined $150 USD while her newspaper was ordered to pay a fine of $250 USD.

To counter misinformation and disinformation, part of the solution lies in decentralized fact-checking efforts. In Sudan,  journalist Wasil Ali has actively worked to debunk false claims. In early September, he debunked a viral false news story about plans by Lufthansa Airlines to start offering flights to Khartoum. In some cases, Sudanese police have also taken to the media to debunk totally fabricated news such as the viral news story that claimed the current Sudanese passport design will be canceled or changed.

Sudanese fact-checking platform Karrib, which relies on crowdsourcing to submit reports of false and fabricated stories and verify them, also countered misinformation and disinformation during the revolution. While it relies on crowdsourcing, moderators still have an influence over the final decision. The platform also runs no ads and it has a comment section for people to share their opinions about each published report.

Right to rectify in Sudanese law

Article 27 of the 2009 Press and Publications Act establishes “the right to correct and rectify”, under which newspapers and other forms of publications are required to publish ”a rectification of facts or statements that caused the damage”, when ”requested by the aggrieved”. While this measure allows those affected by mis and disinformation to correct information published about them, it remains an inadequate measure to counter the widespread dissemination of such information online.

While fact-checking efforts are an important component in the fight against misinformation and disinformation, in the absence of an enabling environment for freedom of press and freedom of information, they are not enough.

The Sudanese transitional government, sworn in last September, should take steps to create the conditions to appeal current laws that allow authorities to send people to jail for allegedly publishing rumors and false news. The government can also create better conditions to promote press freedom, improve transparency and make it easier for journalists and citizens to submit Freedom of Information requests.

These reforms will make it possible for journalists, bloggers and media organizations to seek and publish the truth.

However, tasked with rebuilding the economy, ending internal conflicts and managing the country’s daily affairs until the transition toward full civilian governance is complete, it remains unclear whether the government will prioritize these reforms.

As Sudan transitions to democracy, delaying these reforms could seriously jeopardize the process.