Is Google's action a practice of political self-censorship? 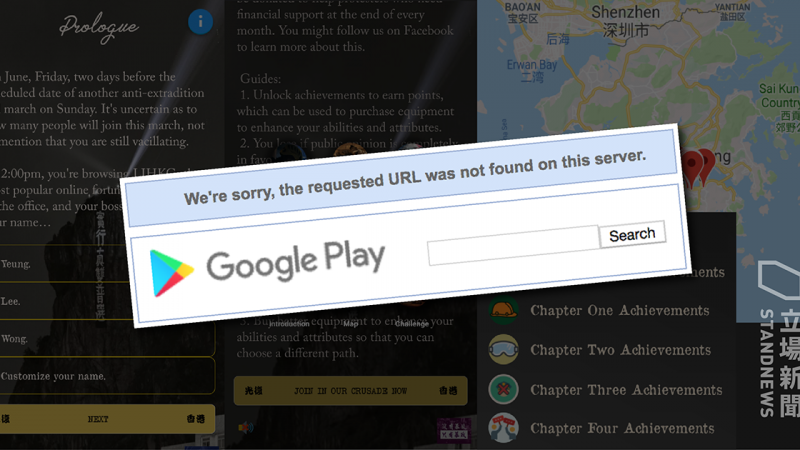 Image from the Stand News

The Chinese version of the report was published on The Stand News on 10 of October 2019. The English version is published on Global Voices as part of a content partnership agreement.

A role-playing mobile app game with a story plot based on the recent Hong Kong protests was suspended from Google Play for violating the platform's “sensitive events policy”. A few days ago, Apple store has also taken down a mobile app marking in real time the locations of protests and police operations.

The mobile game, entitled “The Revolution of Our Times”, was launched on October 5 and taken down three days after.

The game provides details on the political context leading up to the protests with a map on key protest sites in Hong Kong.

The protagonist/player is set as a typical Hongkonger who is frustrated by the failure of the 2014 pro-democracy Umbrella Movement and the deteriorating political situation in Hong Kong. S/he has to decide whether to join the anti-extradition protest on June 9, 2019. Once the decision is made, s/he enters the game and has to make more choices, such as which protesting sites s/he should go, what kind of equipment s/he should bring along and whether or not s/he should join the next protest and etc. Each decision would result in certain risks (i.e arrests) that affect the protagonist's personal development, his/her relations with others and the city's public opinion.

In a phone interview with The Stand News, the game developer under the pseudonym “Spinner of Yarns” said that he received an email notification from Google that the mobile game had violated the company's “sensitive events policy” and had to be taken down. According to the policy, sensitive events refer to “content that may be deemed as capitalizing on or lacking reasonable sensitivity towards a natural disaster, conflict, death, or other tragic event.” It also bars developers from making money off “serious ongoing conflicts or tragedies” through video games. “

Before the game was taken down, it was downloaded 4500 times and had generated HKD1500 (approximately US$200 dollars) income. Spinner of Yarns stressed that 80 per cent of the income for the game would be donated to Spark Alliance, a legal fund for arrested protesters and had filed an appeal to Google. He also asked Google to explain why the company defined Hong Kong protests as sensitive event and wondered if the company's action was but a practice of political self-censorship. He said:

It is a practice of self-censorship if the game could be shelved on Google store upon removing all references to Hong Kong protests.

Spinner of Yarns had studied creative writings at university and joined an IT company upon graduation. He quit his job and spent more than a month developing the game.

In an inaugural post on Reddit-like LIHKG forum, he explained that his main intention is to catch international attention on the protest situation in Hong Kong.

As the mobile app has a function to send messages to all the subscribers, he intended to use that as a channel for Hong Kong protest news updates.

A number of foreign corporations have been accused of bowing to Chinese government pressures for censoring Hong Kong protests. American gaming company Blizzard recently banned a Hong Kong e-sport player from tournament for its game Hearthstone, after he shouted pro-democracy slogan at a post-game interview.

Apple removed from its store the HKmap.live app, which informs users of the locations of protests and police operations soon after Chinese Communist Party affiliated People’s Daily accused the company of assisting Hong Kong “rioters”. While the app could help users avoid stepping into violent conflict areas, Apple told The New York Times:

The app displays police locations and we have verified with the Hong Kong Cybersecurity and Technology Crime Bureau that the app has been used to target and ambush police, threaten public safety, and criminals have used it to victimize residents in areas where they know there is no law enforcement.

The Stand News has contacted Google for further comment on the taking down of the mobile game app. Google has not responded yet.