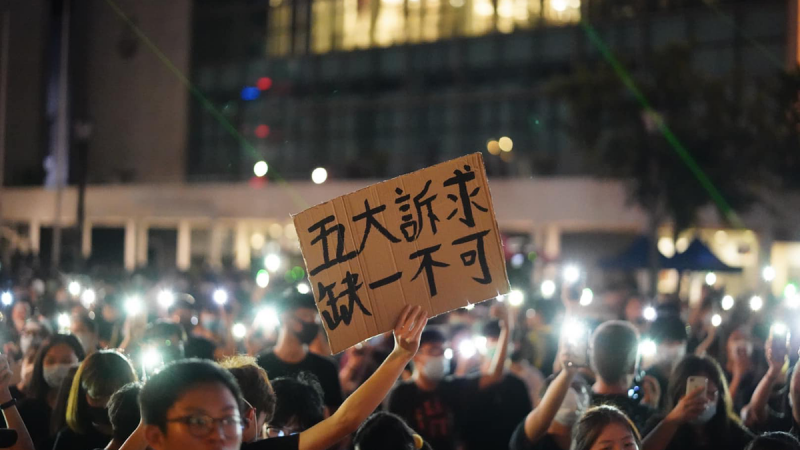 Protester's placard says: Five demands, Not one less. Image from the Stand News.

This article is based on a Chinese transcript of a public talk delivered by Dr. Fu King-wa of the Journalism and Media Studies Center of the Hong Kong University on independent platform Matters.news.

New research by the Journalism and Media Studies Center of the Hong Kong University unveiled that disinformation spread on social media by China framed the 2019 Hong Kong protests as a separatist movement.

Since August 2019, China’s information operations on Hong Kong protests have been unveiled internationally. This was brought to the light after a number of social media platforms, including Twitter and Facebook, discovered the existence of coordinated network activities by China that were spreading disinformation about Hong Kong protests. Twitter said that the aim of these operations was to undermine the protest movement’s “legitimacy and political positions.”

As Twitter and Facebook’s reports had not addressed the nature of disinformation in the operation, a research team headed by Professor Fu King-wa of the Journalism and Media Studies Center of the Hong Kong University conducted follow-up research and ran data analysis on content from 640,000 Twitter user accounts which actively posted Hong Kong-related news since June 2019. The research is still ongoing.

The initial analysis shows that about 20 percent of the 640,000 Twitter users were bots, this percentage is much higher than previous research about information operations in other countries. For example, the percentage of bots in Russia’s information operations [pdf] regarding Ukraine was just about 8 percent according to a research on Russian social media influence published by RAND corporation in 2018.

Even the pro-Hong Kong protests comments that are made outside the Great Firewall on Twitter, Facebook and Instagram, once they are spotted by mainland Chinese netizens and reported on Chinese social media platforms, the individual users could face tremendous pressure, in particular if they have social and business connections with China. The most well known example was the NBA saga regarding Daryl Morey's tweet about Hong Kong.

Hong Kong tycoon, Li Kar Shing is the most unexpected victim of the such political labelling. On Chinese social media, including Weibo and WeChat, he was accused of sponsoring the pro-Hong Kong independent protests by a number of pro-Beijing online opinion leaders and HK-related Chinese social media news outlets. What he had advocated for in his political advertisement was the peaceful resolution of the current conflicts. However, views that criticize both parties⁠— the protesters and the government ⁠—i were considered politically incorrect in the eyes of the Chinese government.

Moreover, pro-Beijing violent acts had been praised on mainland Chinese social media as heroic acts. For example, the Lennon Walls, a public art space which has been set up spontaneously by local residents in many districts for free expression, are labelled “pro-Hong Kong independence” sites and those who have taken action to destroy the walls are depicted as the righteous ones. Since August, many protesters have been attacked by pro-Beijing thugs near the Lennon Walls. On August 20, a female journalist was stabbed on stomach at Lennon Wall in Tseung Kwan O tunnel. The journalist was in critical condition. Two weeks ago, on October 29, a teenage boy was stabbed by a mainland Chinese tourist on his neck and stomach at Tai Po Lennon Wall. The attacker reportedly took down pro-democracy posters on the wall and shouted Hong Kong is “part of China” before he attacked his victim who was handing out flyers.

However, “Hong Kong independence” is not even an agenda of the Hong Kong protesters, who have been taking to the streets since March 2019. The five demands of the protests are complete withdrawal of the extradition bill, which would authorize Hong Kong to extradite crime suspects to mainland China for trial, independent investigation into police operations, the dropping of all riot charges against the protesters, amnesty for arrested protesters, and universal suffrage to the Legislature and the Chief Executive. None of these demands include calls for Hong Kong independence.

When exactly did the “pro-Hong Kong independence” framework emerge? The research team analyzed data from their existing Weiboscope social media data collection project and found out that the term “pro-Hong Kong independence” was barely used before July 21 because it was a politically sensitive term. Under the mainland Chinese censorship system, politically sensitive terms are either blocked or heavily censored and only Chinese government and party affiliated news outlets and celebrities could use these terms. 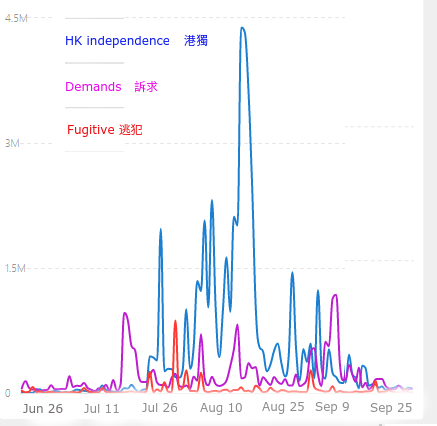 Between 1 of May and 30 of September, the research team collected 210,000 Weibo posts which included the term “Hong Kong independence”. The data shows that the term spiked on July 22 from an average of daily 100 posts before July 22 to more than 2000 on that day.

On July 21, the Civil Human Rights Front organized a rally starting from Causeway Bay to Wan Chai on Hong Kong Island. After the peaceful protest, a large number of protesters continued to march forward to the Beijing Liaison Office in the Western District. One of the protesters managed to throw ink and taint the China national emblem outside the Liaison Office Building. On the same night, a large group of pro-Beijing thugs rushed in the Yuen Long subway station, attacking protesters who returned from the peaceful protests to New Territories. Many were seriously injured.

On the next day, Beijing’s state and Communist party (CCP) affiliated media outlets ran commentaries on the protest outside the Beijing Liaison Office and in particular framed the tainting of the national emblem as an act of “pro-Hong Kong independence”. The once politically sensitive term was now widely used on Chinese social media.

The second spike was recorded on August 9 when more than 6000 posts mentioned the key term “Hong Kong independence”. The background of the spike was related to the first press conference of the by China's Hong Kong and Macau Affairs Office on July 29 which expressed its strong support to the Hong Kong government and police action.

On August 5, protesters led widespread strikes and the aviation workers’ strike had led to the cancellation of more than 200 flights at the Hong Kong International Airport. On August 9, China's aviation regulator stepped in and demanded Hong Kong's flag carrier Cathay Pacific to dismiss employees who took part in the protests.

The greatest spike took place on August 13 after CCP affiliated media outlet Global Times’ reporter, Fu Guohao’s encounter with Hong Kong protesters at the city's international airport. A number of protesters took hold of Fu Guohao at the airport after he had been spotted taking close shot photos of the protesting crowds. They found on Fu’s backpack a blue T-shirt with “support Hong Kong police” logo—  pro-Beijing mobs who attacked Hong Kong protesters on August 11 in various districts wore the sameT-shirts. The protesters questioned Fu’s identity and in the process, Fu yelled out: “I support Hong Kong police, you can now beat me up!” Some protesters did respond with their fists, while others tried to protect him.

Fu’s encounter with the protesters, which was later described as an “outstanding performance”, came after Beijing’s Hong Kong and Macau Affairs Office’s press conference on August 12, during which a Beijing representative claimed Hong Kong protests have shown signs of terrorism. The press conference took place after the city-wide protests on August 11 when anti-government protesters were brutally repressed by the Hong Kong police on the one hand and attacked by pro-Beijing mobs wearing Fu's style of blue T-shirts on the other hand.

Fu Guohao’s incident had gone viral overnight on Chinese social media. In the majority of the comments, Fu was viewed as a hero defending national dignity while Hong Kong protesters were standing in opposition to the Chinese nation.

However, as the 70th anniversary of the People Republic of China was approaching on October 1, the “Hong Kong independence” frame faded out on Chinese social media.

Who was involved in establishing such “pro-Hong Kong independence” framing? According to the data set, approximately 13 percent of the posts which contained the keyword “Hong Kong independence” were directly re-posted from People’s Daily and Global Times. If including the copy and paste re-posts, the percentage would be even higher.

The research team will continue to dig further into the data for a more elaborate analysis of China’s information operations in relation to the Hong Kong protests. However, initial findings strongly suggest that the Chinese Communist party and state media apparatus have played a key role in spreading information framing the protests as a “pro-Hong Kong independence” movement. Such attempts are intended to mislead China’s public opinion that the discontent is part of a separatist political plot to undermine the “integrity of Chinese territory” – a phrase repeatedly used among mainland Chinese online patriots.