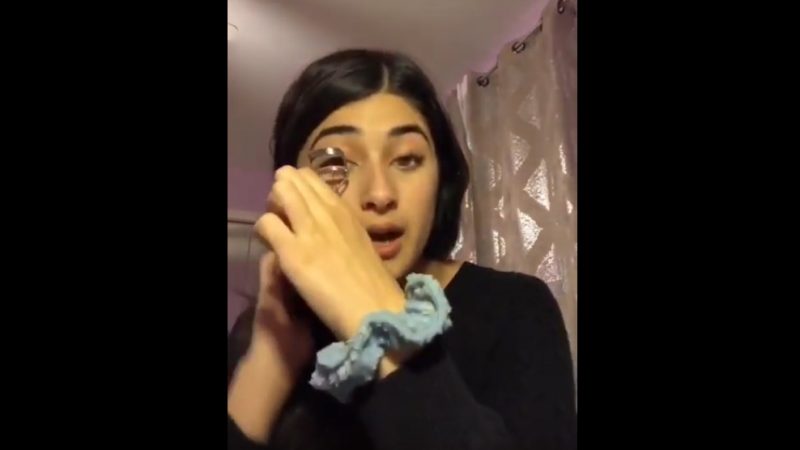 This post is originally written by Holmes Chan and Tom Grundy and published on Hong Kong Free Press on 27 November 2019. The following edited version is published on Global Voices under a content partnership agreement.

A teenager who spoke out about the plight of Uyghurs in Xinjiang has challenged the Chinese-owned social media app TikTok over its decision to block her from posting new content.

Feroza Aziz, 17, made headlines earlier this week after posting videos detailing the treatment of Uyghurs by the Chinese authorities. She sought to sneak through TikTok’s content moderation system by disguising the clips as “makeup tutorials.”

Aziz told HKFP on 27 November that she took advantage of viewers’ interest in fashion to make her message heard. The videos netted more than half a million “likes” on the popular social platform, and its duplicates on other platforms have been viewed millions of times.

Aziz has since been blocked from posting content on TikTok, though a spokesperson from the company told BBC News that it “does not moderate content due to political sensitivities.” The app – known as Douyin in mainland China and TikTok in the rest of the world – is owned by Chinese company Bytedance, based in Beijing. Aziz said:

I knew that if I start with a makeup tutorial, then people would want to watch. I then realized that I should use this idea of disguising my video because it will reach out to more people without TikTok [finding] out that I am talking about China’s corrupt government.

In the viral video, Aziz started with instructions on using an eyelash curler, before asking viewers to use their phone to search about what is happening to Uyghurs in Xinjiang:

how they’re getting concentration camps, throwing innocent Muslims in there, separating families from each other, kidnapping them, murdering them, raping them, forcing them to eat pork, forcing them to drink, forcing them to convert […] This is another Holocaust, yet no one is talking about it. Please be aware, please spread awareness in Xinjiang right now.

Aziz, an Afghan-American, urged governments around the world to take action to “stop innocent people dying” and tackle the humanitarian crisis:

As a Muslim myself, I have been a victim of racism and prejudice. I also grew up in a Jewish community, so I have always been aware of the Holocaust and the genocide placed on the Jews in World War II. […] After finding out about this issue, I knew that I had to say something about this, because if I didn’t say anything, who would?

Aziz said that her video was meant to raise awareness, and the reception had been mostly positive on social media.

While the makeup tutorial video remains available on TikTok, Aziz said on 26 November that she had been banned from posting new content for a month, but added: “This won’t silence me.”

On 15 November, TikTok banned one of Aziz’s old accounts for posting an unrelated video that allegedly broke its rules on terrorism-related material, and also blocked her smartphone on 25 November, according to BBC News.

I am blocked from posting on tik tok for a month. This won’t silence me.

The previous video showed Aziz reacting to a montage of Caucasian celebrities, with a caption of “me only liking white boys in middle school.” The video then transitions to a montage of non-white men with the caption “me now.” The video ends with a visual punchline of Bin Laden’s picture.

Aziz told HKFP that the video was meant as “dark humour” and “poking fun at those who have told me and my other Muslim brothers and sisters that I should marry a terrorist”:

As a Muslim-American growing up in an almost all-white community, I have been ridiculed my whole life for my religion. I’ve been told to leave the country, go bomb another country, or to go marry a terrorist.

I decided, why not take these negative and racist remarks made to me, and make it into a funny video where more Muslims can laugh at, because the truth is, they face the same prejudice.

TikTok says the ban was not due to criticism of China. Her previous account, they said, had posted a video of Osama bin Laden on Nov. 15, leading to a ban for her phone. She says the video was an obvious joke about racism she has faced as a Muslim, and shared the video with us: pic.twitter.com/5w7WpV2gB9

Aziz added that it was “extremely suspicious” for TikTok to cite her old video as the reason for her suspension because both the video and the old account had already been deleted.

I created a new [account] and never posted that Bin Laden video again and never posted anything that would offend anyone. But right when I post about China’s concentration camps I get suspended, over a video I made that was deleted on another account that was also deleted? It makes no sense!

Finally today on 28 November, the company issued a public apology and gave Aziz back her account. But the video blogger said she did not buy Tiktok's error claim:

UPDATE: Tiktok has issued a public apology and gave me my account back. Do I believe they took it away because of a unrelated satirical video that was deleted on a previous deleted account of mine? Right after I finished posting a 3 part video about the Uyghurs? No.

The predominantly Muslim Uighur ethnic group is among the minorities targetted in what Beijing claims is a campaign to tackle unrest and separatism. The UN says a million Uighurs have been arbitrarily detained in extralegal “political reeducation camps,” whilst Human Rights Watch reports that surveillance and repression in Xinjiang have increased dramatically since 2016.

The NGO says that biometric data is collected from residents, passports are confiscated, religious activities are restricted, “abnormally long” beards, public prayers and Muslim veils are banned, whilst vehicle and mobile phone owners are made to install trackers.