A journalist was recently arrested for "inciting panic and unrest" 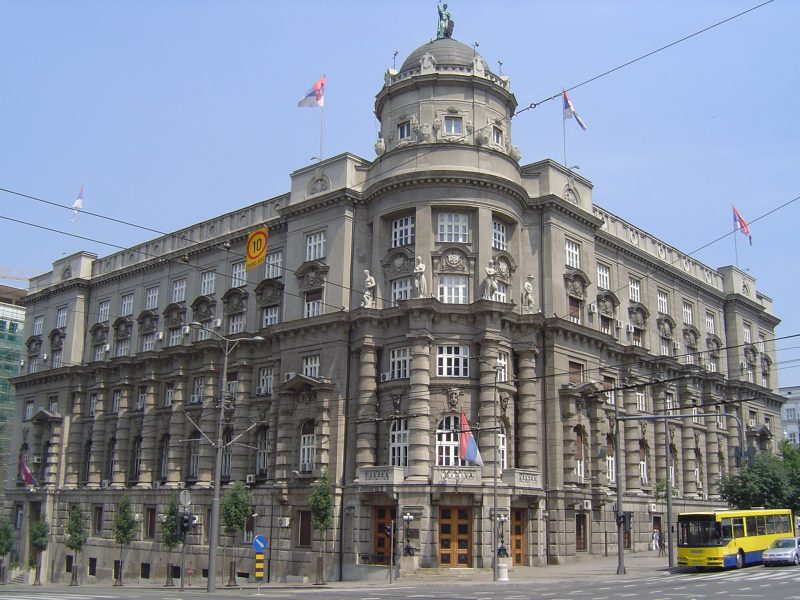 Building of the Government of Republic of Serbia in Belgrade. Photo by Wikipedia user Matija, CC BY-SA 3.0.

This story is based on reporting by Global Voices content partner Meta.mk News Agency, a project of Metamorphosis Foundation. Check out Global Voices’ special coverage of the global impact of COVID-19.

Serbian Prime Minister Ana Brnabić announced on Thursday, April 2, that her government will revoke the decree [an executive order] for centralized informing in regard to the novel corona virus, after on Wednesday (April 1) a journalist was arrested for “spreading panic and inciting unrest.”

Brnabić stressed that the decree will be revoked at request of the President of Serbia, Aleksandar Vučić, while she took the blame for the “stupid” emergency regulation, claiming it was all her doing.

It was a result of my stupidity and I am the only one to blame for enacting of this [decree], I turned out stupid for not explaining it properly and allowing for this to cast a shadow on the actually fantastic job we did so far, about the way how we had been informing the citizens and how we are going to do it in the future, and about who is supposed to provide information.

Brnabić stated that she believed the decree would protect the citizens from unverified information, while Vučić feared negative effects on the overall information sphere.

The decree, formally titled Conclusion of the Government, came into power on March 31, stipulated that the only entity in charge of informing the public about the situation and consequences of the pandemic is the Crisis Headquarters headed by the prime minister, while spreading information by unauthorized persons must not be considered accurate or verified, and threatened legal consequences for spreading disinformation during the state of emergency.

Ana Lalić, a journalist of the portal Nova.rs was released on April 2, after spending the night in jail, following her arrest after the Clinical Center of Vojvodina based in Novi Sad pressed charges against her with the prosecutor and the police for upsetting the public and harming the reputation of the institution. Prior to that, the hospital expressed “bitterness due to inaccurate, unverified and malicious  reporting by the Nova.rs portal about the work of this health institution.”

In her article published on April 1 and titled “Clinical Center of Vojvodina at breaking point: Nurses without protective gear,” Lalić described the “chaotic” situation at the hospital and reported about the chronic lack of basic equipment – personal protective gear, sanitary material and medicines. The Center did not respond to her questions about claims by whistle-blowers she mentioned in her story.

After her arrest, Ana Lalić was sentenced to 48 hours of detention, however the authorities revoked the decision before the deadline.

The arrest provoked reactions by Freedom House, Article 19 and other organizations advocating the right to work of journalists, particularly under conditions of the COVID-19 pandemic.

Domestic political parties, civic organizations like the Youth Initiative for Human Rights, Independent Journalists’ Association of Vojvodina and media outlets from Serbia also reacted to the arrest, with many citizens expressing revolt via the social networks.

Tweet: This is Ana Lalić, journalist from Novi Sad. She was arrested tonight because of her text about Clinical Center of Vojvodina.
They've searched her apartment, confiscated her mobile phone and laptop.
THEY WILL SEEK OUT HER SOURCES! Like hyenas. Even though she has the right to protect them and not reveal them!
If she's not released, this should be the only question [every journalist should ask] at press conferences! Ad nauseam!

Lalić's case was not the only one. The International Press Institute (IPI), a global network of editors, media executives and leading journalists for press freedom, criticized the arrest of three journalists in Serbia in the space of a week and called on authorities to ensure the COVID-19 pandemic does not hamper the ability of the media to report freely.

The charges against Lalić have not been dropped and investigations are ongoing, Vladimir Radomirović, of the Journalists’ Association of Serbia (UNS), told IPI. “This is the second case of a journalist being arrested in a week,” he added. “It’s very worrying.”

On March 26, a TV crew of the KTV station was arrested for allegedly failing to undergo mandatory disinfection while trying to enter an administrative building to conduct an interview.

“We welcome Brnabić’s decision and call on the authorities to fully respect the ruling,” Oliver Money-Kyrle, IPI Head of Europe Advocacy and Programmes, said. “We also urge the government of Serbia to ensure that journalists are able to go about their work without fear of arrest. Accurate and updated reporting from journalists will be an essential ally of governments in tackling the pandemic.”

After the release… PR

According to an April 3 interview with Lalić made by her media outlet Nova.rs, even though she had been released, and her laptop and mobile phone were returned, the process against her is ongoing. The charges based on the revoked decree had not been dropped, as the Criminal Code of Serbia also includes a provision on “inciting panic and unrest” in Article 343. The charge carries a prison sentence of 6 months to 5 years.

Serbian daily Danas informed on April 2 that as a mitigation measure for the scandal with the arrest of Ana Lalić, the Clinical Center of Vojvodina (CCV) invited Reuters reporters to film their emergency unit, “so the foreign journalists would make sure that everything is in order.”

On April 2, the video filmed by Reuters was then promoted by state media in Serbia as proof of government's denial of Lalić's reporting, alongside a statement by the Provincial Secretary for Health for Vojvodina Zoran Gojković demanding that “journalists should not publish unverified information.”

According to Danas, this was a PR-stunt, intended as a snub against the local media community.

In this case, the state didn't “stop Reuters,” but Ana Lalić, and through her all domestic journalists and media received a slap in the face by the CCV management.

The catchphrase “Stop Reuters” is part of the history of journalism in Yugoslavia. It was uttered in 1980 by a frustrated official Xhavid Nimani, when he was told that Reuters is still informing about the unrest in Kosovo at the time when the state attempted to impose censorship over all domestic media.

According to covid19.rs, the official government website on the pandemic, by April 7 the total number of infected people in Serbia increased to 2020, with 58 documented deaths.

Albania  4 May 2022
END_OF_DOCUMENT_TOKEN_TO_BE_REPLACED
Cancel this reply