Tunisia has a disinformation problem, but (further) criminalizing speech won't solve it

During the elections, rumors and false news were widely disseminated 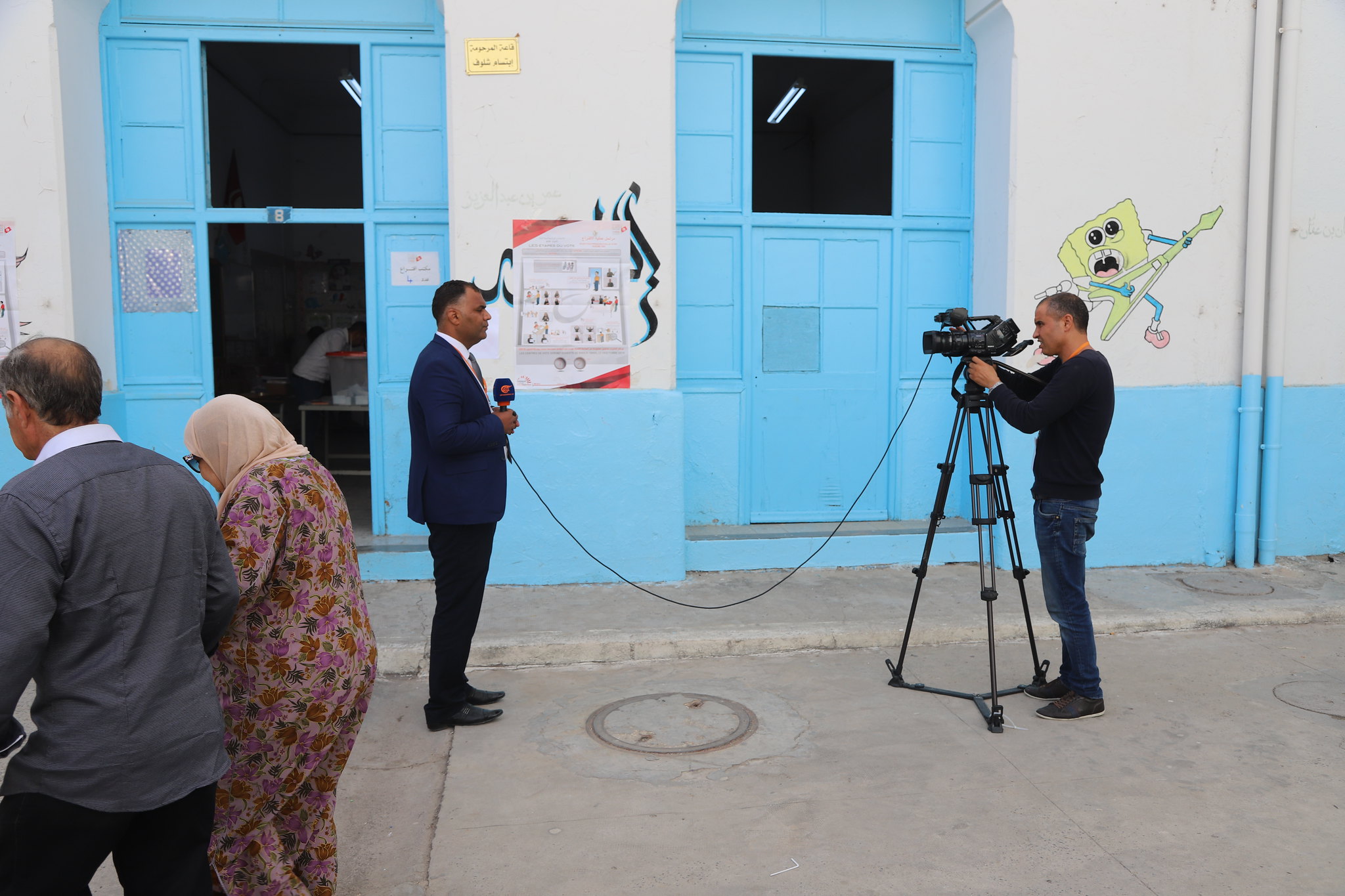 A journalist and his cameraman report from a polling centre on Election Day on October 13, 2019. During last year's elections, social media was marred with disinformation. Photo by ISIE, the Tunisian electoral commission [Public Domain].

Following the outcry from human rights groups and citizens, a controversial bill that sought to criminalize the spread of ‘’false’’ and ‘’questionable’’ news online in Tunisia has been withdrawn.

The bill, initiated by member of parliament (MP) Mabrouk Korchid, from the Tahya Tounes party (a member of the current governing coalition) and endorsed by 46 other MPs, took many Tunisians by surprise as the country is in lockdown because of the COVID-19 pandemic.

It proposes amendments to articles 245 and 247 of the Tunisian penal code to ‘’prevent attacks on reputation and the spoiling of the democratic environment,’’ citing Germany and France as examples of democracies that legislated against ‘’fake news.’’

However, language in the bill is broad and vague, and would violate constitutional guarantees to freedom of expression and international human rights standards. Article 31 of the Tunisian constitution guarantees freedom of opinion, thought, expression and media and publication freedoms and bans any prior censorship on these freedoms, while Article 32 guarantees access to access to information and communication networks. Tunisia is also a state party to the International Covenant on Civil and Political Rights (ICCPR).

The bill proposes a prison sentence of two years in jail and a fine between 10,000 and 20,000 Tunisian Dinars (around $3,500 to $7, 000 United States dollars) against ‘’users of communication networks and social media platforms,’’ convicted of disclosing ‘’any false or questionable speech…which may be insulting to individuals, groups or institutions.’’

Those who violate this provision during an electoral period or in the six months before elections can risk a double sentence. The punishment may also be doubled for users spreading this content while hiding their identities.

Additionally, the proposed amendments would give the public prosecutor broad powers to ‘’monitor electronic crimes and uncovering those committing them.’’ During electoral periods, the prosecutor is required to ‘’take the necessary preventive measures’’ to prevent the dissemination of such content.

The bill, dated March 12, 2020, was submitted to parliament on March 29. Its proponents requested for it to be reviewed urgently under the pretext that the country’s regional elections are scheduled for 2021. However, as soon as the bill was announced to the public, its supporters received a backlash from human rights groups and angry citizens online.

A day after its submission, the bill’s initiator, Korchid, announced that he will withdraw the bill “for now’’ due to the current health circumstances. Several other MPs also said that they were withdrawing their signatures. Others, like independent MP Safi Said, claimed that they endorsed a different version of the bill from the one that was eventually submitted.

Countering disinformation ‘without prejudice’ to freedom of expression

There is no doubt that Tunisia has a mis- and disinformation problem, just like anywhere else in the world. Concerns about the impact of such content on the electoral process and the country’s fragile democracy came to the fore during last year’s presidential and legislative elections. During the electoral period, social media was rife with political rumors and false news — particularly on Facebook.

The elections may have come to an end, but rumors have continued to spread, as the country fights the spread of COVID-19, which has already infected 628 and killed 24 people as of April 7. This has prompted the Ministry of Health to publish a statement on March 29, in which it warned that it would take legal action against those who ‘’spread rumors and misleading information to protect public health.’’

But while countering disinformation is a legitimate purpose, further criminalizing peaceful speech, would only greatly restrict users’ rights to freely and peacefully express their opinions and access information, and as a result, threaten Tunisia’s democratic progress achieved in the past few years following the toppling of the Ben Ali regime in 2011.

In a statement published on March 30, by 24 civil society organizations, human rights and press freedom groups including the Tunisian League for Human Rights (LTDH), The General Union of Tunisian Workers, Tunisian Association for the Defense of Individual Liberties and the National Syndicate of Tunisian Journalists (SNJT), they warned:

While countering fake news is legitimate, it should not turn into a pretext to violate articles 31 and 32 of the Tunisian constitution using vague expressions like the ones that appear in the bill.

On the other hand, the country’s independent broadcast regulator (HAICA), called for a multi-stakeholder approach to address mis- and disinformation:

The topic of fake news should be addressed within the framework of a broad dialogue that brings together all stakeholders from experts, professional structures, media institutions, and civil society to find solutions to counter this phenomenon without prejudice to the essence of the right to freedom of expression, in complete harmony with the requirements of Article 49 of the Tunisian constitution.

Article 49 states that restrictions on rights and freedom guaranteed in the constitution ‘’can only be put in place for reasons necessary to a civil and democratic state,’’ and limits such restrictions to legitimate reasons such as protection of the rights of others, and requirements of public order or public health etcetera, “provided there is proportionality between these restrictions and the objective sought.’’

This recent attempt to restrict Tunisians’ rights to freedom of expression and information online has been short-lived. However, these rights remain at risk. After all, Korchid said that he was withdrawing the bill ‘’for now,’’ and that he remained ‘’convinced’’ that it does not threaten freedoms. So, it is possible that legislators will attempt to submit it again or a different version in the future.

Additionally, while Tunisia has made commendable progress when it comes to human rights since 2011, several laws that contain restrictions to freedom of expression that violate international standards remain on the books.

Article 86 of the Telecommunication Code stipulates that anyone convicted of “harming others or disrupting their lives through public communication networks” may face up to two years in prison. The Penal Code has provisions that criminalise defamation and the spreading of content “liable to cause harm to public order or good morals.”

Instead of further criminalizing peaceful speech, the Tunisian parliament should instead work to amend and abolish the aforementioned restrictions. Only measures that reinforce government transparency and build citizen trust in its institutions — and a favourable environment to media and press freedoms — can counter disinformation, without harming fundamental rights and freedoms.