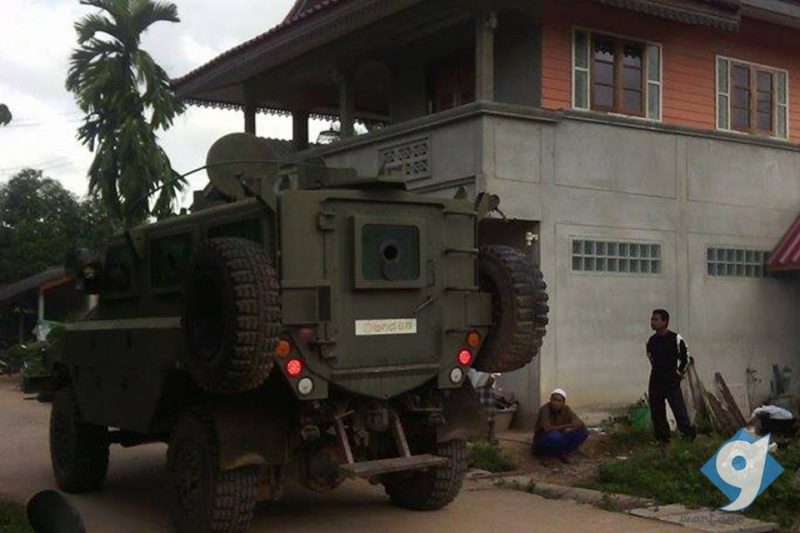 A military raid on a school in Pattani, Thailand. Photo and caption by Prachatai. Source: Flickr (CC BY-NC-ND 2.0)

Editor's note: This piece was written by Darika Bamrungchok, Digital Rights Manager (Mekong Program) at EngageMedia, based in Bangkok. It is part of our series on digital ID systems produced in partnership with The Engine Room. Visit the Digital ID microsite to read a full research report on this global trend, and case studies on five countries that have deployed digital ID systems, including Thailand.

Many countries across the globe have been modernizing their national identification systems to incorporate the use of biometric data to verify people’s identities and provide public services. Thailand is no exception.

Thailand's Smart ID Card, which features the use of a microchip, was first introduced in 2005. However, the use of biometrics with the National ID card did not  materialize until 2019, when the Digital ID Bill was passed by the National Legislative Assembly. Currently, a national digital ID company is testing the implementation of digital IDs, but progress is slow.

Before the planned digital ID system is rolled out nationwide, stakeholders including the government, the private sector and civil society should take a step back and consider the risks posed by the system and the potential for misuse of biometric data in Thailand, particularly given the country’s problematic record of collecting and using such data in the country's Deep South region as part of its counter-insurgency policies.

After the 2014 coup, Thailand's political situation deteriorated, ending with a flawed election process in 2019. Additionally, the pro-military government has since 2014 used various repressive measures to quell the opposition and other dissenting voices and to suppress criticism from people viewed as political threats, which has created a climate of mistrust and fear. All of this raises questions about government transparency in implementing the digital ID system, in addition to concerns about security and privacy safeguards to prevent the misuse of biometric data.

“The trust in Thai authorities is getting low,’’  a 27-year-old pro-democracy activist who requested not to have her name disclosed said in a phone interview with Global Voices (GV). She added:

So, when any new digital policies are introduced, we have to remind ourselves that those technologies will be implemented under a military mindset. It can create a range of risks violating people’s privacy, freedom, and political participation. The upcoming digital ID or mandatory biometric data system could be another tactic to monitor human rights defenders and critics who are simply against the government.

Without explicit safeguards and good data governance, the repercussions for privacy and human rights—particularly of vulnerable groups and minorities—could be serious. Malay Muslim communities in Thailand’s southernmost provinces, have had to learn that bitter lesson, the hard way.

The forced biometric system is rife with abuse and misuse

In predominantly Buddhist Thailand, the majority of people living in the Southern Border Provinces (SBPs) are Muslim. Over the last few years, violence in these provinces has been escalating, with more than 7,000 casualties in the last 15 years. This region has a long, troubled history of state-led discrimination against local Malay Muslims, including various draconian military measures imposed by the authorities under special security laws.

During a public seminar named “Seize, Trample, Repeat, Change’” held in October 2019, Romadon Panjor, editor of the Deep South Watch website, described the Southern Provinces as ‘’the testing sites for the military forces.’’ According to Romadon:

They are merely areas for testing certain tools… From there, some methods have been replicated and applied countrywide.

Among the government’s counter-insurgency methods, the most controversial was the forced collection of DNA from Malay Muslims.

Under Thailand's Criminal Procedure Code section 131 and 131/1, people who are arrested for criminal suspicion or convicted of a crime can be subjected to DNA collection. In Thailand's Deep South, however, security forces have consistently performed dragnet operations to arbitrarily collect DNA samples from Malay Muslims, most of whom had never committed any crime.

The Cross Cultural Foundation (CrCF), a human rights advocacy group, has been monitoring the human rights situation in the region since the re-emergence of ethno-religious conflict between the Thai state and the Malay Muslim insurgent groups in 2004.

In 2012 the Thai government started collecting biometric data, including DNA samples, from Malay Muslims in the region for use as forensic evidence to identify perpetrators involved in violent incidents. From January to September 2019, the foundation received at least 139 reports of forced DNA collection in the region.

A human rights researcher from the CrCF, Chanatip Tatiyakaroonwong, said in an interview with GV that:

this massive collection of personal biometric data raises serious concerns about violating people’s basic rights. The discriminatory nature of these measures could amount to racial profiling, which subjects Malay Muslims to disproportionate and unnecessary surveillance based on ethnic prejudice rather than objective signs of suspicion.

In researching the period April 2019 to April 2020, Chanatip found that the Thai state’s practice of collecting biometric data, along with other counterinsurgency measures, is often carried out at checkpoints or during search operations at houses, villages, dormitories, private religious schools in the Southern Border Provinces, as well as at the homes of people from the region living in Bangkok, the country’s capital.

Random DNA collection in Malay Muslim communities grew into a more systematized structure alongside many other policies such as taking photos of their faces, their ID cards, and their car number plates by military officers. Currently, the government has launched a large-scale measure to collect the facial data of a wide-ranging group of people in the region. They also signaled an expansion of CCTV by integrating AI technologies in the region.

In April 2019, the practice had become even more widespread as DNA collection was incorporated into the annual mandatory military conscription process in three districts of the Southern Border Provinces and four districts of Songkla Province. Chanatip’s research also noted that between April 4 and April 11, 2019, at least 20,250 men who underwent conscription had DNA samples taken by officers.

After concerns were raised over the collection of DNA samples during military conscription, Colonel Chalat Sriwichien, Deputy Chief of the Special Task Force in the city of Yala, refuted reports that the authorities were conducting forced DNA testing. He added that the DNA samples in the new national security database would help security authorities solve violent crimes connected to the insurgency.

Prime Minister Prayut Chan-o-cha also denied that forced DNA testing constituted a violation of rights, maintaining that “the procedure is on a voluntary basis.’’ He added that the Southern Border Provinces was merely the first area where DNA collection from army conscripts had taken place and that the practice would be expanded to other regions.

But the irony here is that while authorities are aggressively implementing random DNA collection—targeting ordinary citizens in Muslim-dominated communities—there remain thousands of stateless persons across the country who cannot afford the required DNA verification test for their citizenship applications, especially stateless people who have no birth certificate. According to research published in 2015, stateless people have to visit a clinic to have a DNA test, which costs THB 4,800 (USD 150).

There is no consent under the climate of fear

According to Chanatip’s research, in this climate of fear, many people in the Southern Provinces give DNA samples without getting adequate information about the procedure. The authorities collect samples for the purpose of gathering forensic evidence for prosecution, but also to intimidate locals suspected of being affiliated or sympathizing with insurgents.

Chanatip interviewed wives of suspected insurgents who said that their DNA samples had been collected during house raids, although they are not genetically related to their husbands.

“It made us feel so bad. They treated us as if we were criminals. We are now anxious,” the wife of a suspected insurgent in Pattani told him.

The CrCF observes that despite being suspicious and reluctant to give DNA samples, most people did not know they had the right to refuse to give their sample, which is guaranteed under Sections 131 and 131/1 of the Criminal Procedure Code. In some cases, security officials reportedly instructed people to sign a consent form after the sample was collected. In other cases, the owners were not given the option of deciding whether they consented to the collection. In no case was anybody provided with information about how and where DNA data is accessed, processed, and stored.

No facial scan, no phone service

In June 2019, the government took the further step of ordering all mobile phone users in three southernmost provinces to register their SIM cards via a facial recognition system. Those who failed to register risked having their mobile phone service cut.

An army spokesman said that SIM cards have been used to detonate bombs and facial recognition could help identify perpetrators. While the government said that it only planned to use the system to find suspects or persons of interest for questioning, this measure could still negatively affect the lives of many innocent citizens, including the risk of making wrongful arrests.

It remains unclear how the facial data the government obtained through the mandatory SIM card registration will be utilized or incorporated into the current surveillance infrastructure.

Chanatip mentioned one concern of locals:

Malay Muslims tend to express much more suspicion towards this policy and worry that these data would be abused in some way. A local political activist said to me that this measure would only intensify the locals’ distrust in the government and decrease the legitimacy of the ongoing peace process.

The Thai government’s controversial practice of forced DNA collection and SIM card registration using facial recognition in the Southern Border Provinces is a reminder for the need for awareness-raising about its digital ID project. As the government pushes for the implementation of a country-wide digital ID system, there are concerns that these same draconian measures could be applied to other regions and ethnic groups across the country. If the system is not transparent, and if citizens are not provided with prior informed consent before their data is collected and do not know what happens to their personal data, including who has access to it, how it is collected and stored, the people’s right to privacy could be doomed.

Without such measures, many “will continue to feel that they are unfairly subject to racial profiling and intense state-led surveillance,” Chanatip warned.