Internet shutdowns in Sudan: The story behind the numbers and statistics

Intentional internet disruptions are a violation of fundamental human rights 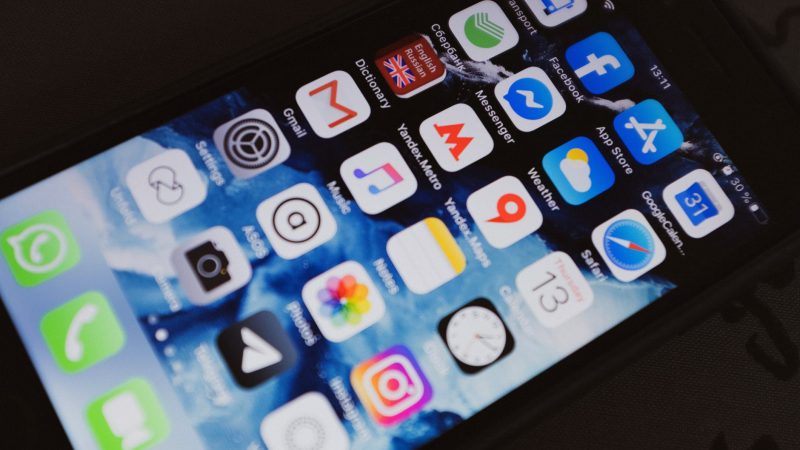 During internet shutdowns in Sudan, many citizens were not able to communicate via various apps on their mobile phones during politically charged periods. Photo by ready-made via Pexels, free to use.

Editor's note: The author of this post, Khattab Hamad, is a current Canar employee.

Governments around the world execute policies to allow for massive surveillance and censorship on the internet. In Sudan, for example, users are not entirely safe or free on the internet. According to Freedom House, Sudan’s freedom on the internet score is low at just 25 on a scale of 0, being least free, to 100, most free.

Amid a revolution that eventually led to the ousting of longtime dictator Omar al-Bashir, the Sudanese government blocked social media access to Facebook, Twitter, WhatsApp and Instagram on December 19, 2018. To get around the ban, citizens used Virtual Private Networks (VPNs) to access social media. On February 26, 2019, the government unblocked social media sites, but digital rights activists and human rights defenders called on citizens to continue using VPNs because privacy is not guaranteed.

On April 11, 2019, when the Bashir government collapsed and the transitional military council (TMC) assumed power, citizens began to feel safer to use the internet without a VPN.

Sudanese people experienced an internet shutdown again from June 3, 2019, to July 9, 2019, amid protests and demands for civilian rule. June 3 marked the first anniversary of the brutal dispersal by security forces of a sit-in in which protesters demanded civilian rule near military headquarters. At least 100 protesters were killed. To get around this total shutdown, protesters used a variety of methods to share urgent information but faced immense challenges.

Sudan has four main internet service providers (ISPs) Zain, MTN, Sudatel and Canar. Zain, MTN and Sudatel have a GSM (Global System for Mobile Communications) license that allows them to provide internet services via mobile networks. Canar does not have a GSM license, but it provides internet through landline and wireless, leased lines. 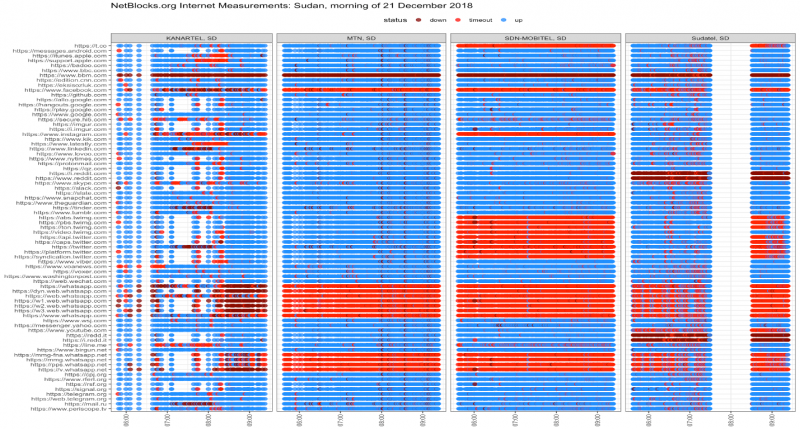 After the revolution — a total shutdown

On June 3, 2019, the internet went down all over Sudan due to a political decision from the TMC. Sudanese internet users were able to get back online again on July 9, 2019, due to a court decision that ordered all service providers to restore internet access.

Sudan’s 2018 Telecommunication and Post regulation Act gives the regulatory authority the right to disrupt any communication and telecommunication or broadcasting station if it violates the law. This vague provision does not provide more details, which allows the authorities to interpret it as they see fit to restrict access to services.

The below graph from NetBlocks shows effective internet availability by a provider between May 27, 2019, and July 9, 2019. 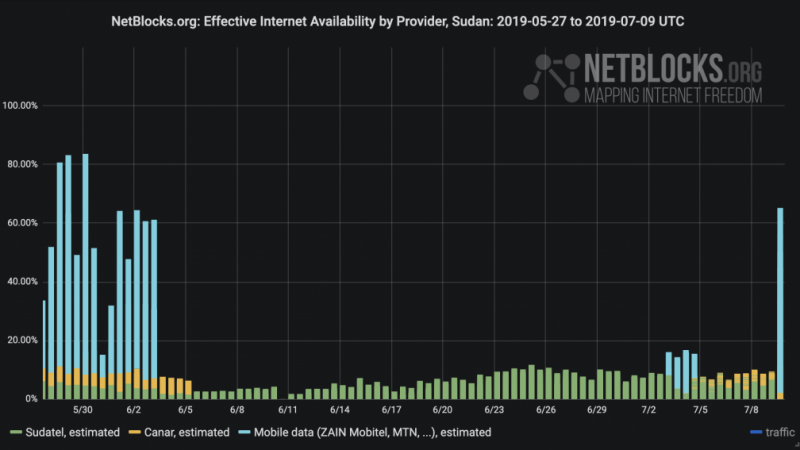 The below graph from a Google transparency report shows the incoming traffic and requests to Google from Sudan. 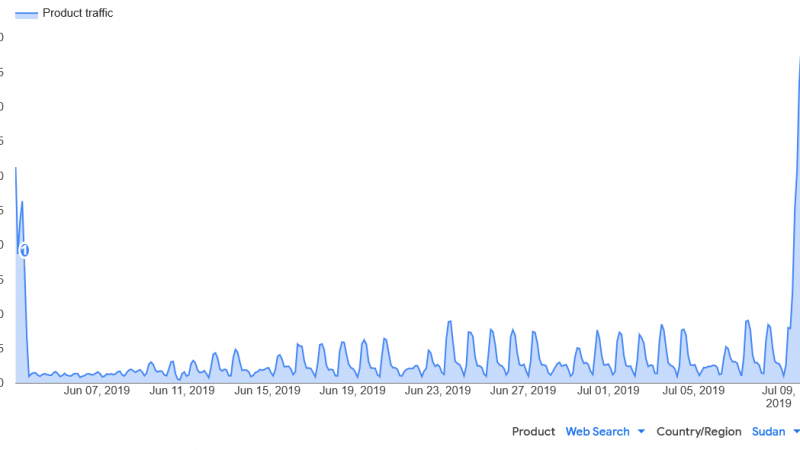 To shut down the internet this time, authorities disabled the “access point name,” or APN, in the mobile data network. Using this method, users can't see the data sign on their phone screens.

Canar first refused to shut down internet services for its users, but it was forced to disable Wimax and fixed LTE services on June 5, 2019, as evidenced in Figure 2, comparing Canar traffic with other operators.

During this period, Canar and Sudatel continued to provide internet service through optical fiber infrastructure — expensive for individual users — as they were not forced to disrupt access to these services. As a result, the few users who could afford access to these services could continue to share political news with the global community via the internet.

Sudanese digital rights activists took several actions to get around the internet shutdown.

The Professionals’ Union of Technology and Communication (PUTC) sent almost 1 million bulk short message services (SMS) from servers outside of Sudan to deliver directives from revolutionary leaders and refute rumors and disinformation.

Activists also used proxy servers, which “act as an intermediary for requests from clients seeking resources from servers that provide those resources.” These services allowed users to bypass internet censorship and filtering.

Some Sudanese diaspora suggested providing internet through VSAT (a satellite technology that provides the internet) but, due to the high cost and risk in equipment delivery at that time, this option was not possible.

Internet blackout amid a brutal crackdown

During the June-July 2019 internet shutdown, Sudanese people in and outside of the country were scared because they could not communicate with their families or access and share essential information.

According to media reports, on June 3, 2019, security forces raped dozens of protesters and threw a number of dead bodies in the Nile river. It is believed that more than 100 protesters were killed in the crackdown, although the exact number of those killed is still unknown. Rights groups believe that the internet was shut down to prevent any leakage of information or evidence of violations.

While many organizations were working to provide basic services such as water, food, health and education during the shutdowns, they failed in many ways to meet peoples’ needs due to a lack of internet connectivity.

Intentional internet disruptions are considered a violation of fundamental rights and freedoms, and in July 2016, the United Nations Human Rights Council passed a resolution by consensus that condemned internet shutdowns.

According to NetBlocks statistics via its Cost of Shutdown Tool, Sudan’s economy lost $1,694,039,708 United States dollars during the internet shutdown period from June 3, 2019, to July 9, 2019, without accounting for further losses due to a collapse in consumer and investor confidence. 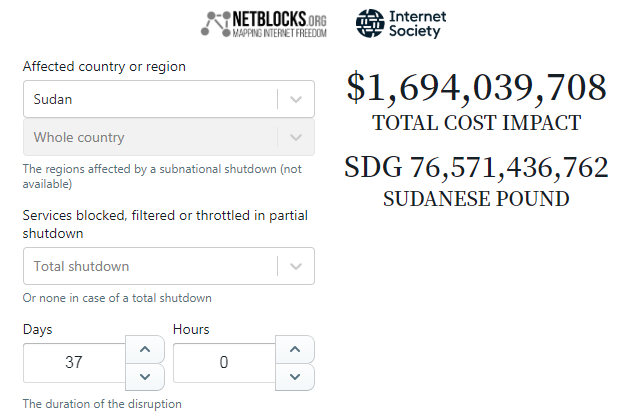 According to Al Jazeera, losses to companies and individuals with internet connections exceeded $750 million USD during the 37-day shutdown that started on June 3, 2019. The World Bank estimated a $45 million USD loss per day due to the blackout. According to a 2019 Quartz Africa report, internet shutdowns cost the Sudanese economy $1.8 billion USD.

A future with no shutdowns?

To imagine a future in Sudan with no internet shutdowns, authorities must work on several laws: First, a law that enshrines network neutrality so that the internet remains free and open, including during political crises; second, a law that criminalizes the denial of internet access; and third, a law to prevent violations of users’ privacy and personal data.

Taking these steps will make a future shutdown decision a harder one to make.