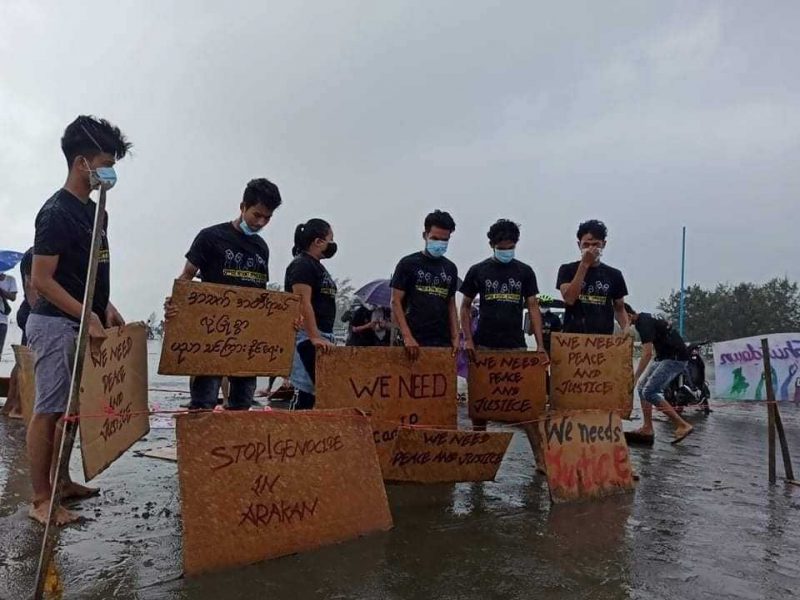 Youth protesters in Myanmar calling for peace in the Arakan region and the restoration of internet in the 8 townships in Rakhine and Chin States. Photo courtesy of Athan, used with permission

A year has passed since the Myanmar government restricted mobile internet networks in eight townships of Rakhine and Chin States. More than 1.4 million people are suffering from this shutdown and are unable to access vital information about the escalating conflict in the region and the COVID-19 situation in the country.

Aside from the shutdown of mobile internet networks in some parts of Rakhine and Chin, the government also ordered the blocking of websites that allegedly spread disinformation. But independent and ethnic media websites that provide local information were also included in the order.

The Freedom of Expression Coalition and other civil society groups marked the one year anniversary and registered their protest through an online gathering.

Athan, a youth-led civil society organization that promotes freedom of expression tweeted about the event:

The online protest was attended by 170 participants. They emphasized that the shutdown prevents locals from having any health information about COVID-19. Members of the coalition during the online event asked the World Health Organisation to urge the Myanmar government to end internet shutdowns amid the pandemic.

A banner was unveiled in the main Sule Square in Yangon that posed a provocative question.

You cut internet access because you dont want us to know you r committing war crimes & arbitary killings?

Khin, a digital rights activist, has a message for the ruling National League for Democracy (NLD):

In the midst of pandemic, today marks 1 year that people in 8 townships of Rakhine and Chin don’t have access to internet. If this NLD government has any shame left, keep the internet on in those townships right now. #StopInternetShutdownMM #KeepItOn #DigitalRightsMM pic.twitter.com/56M9WllR1A

Protest on internet shutdown in Rakhine and Chin states of Myanmar for 365 days pic.twitter.com/af5CfUlaXn

Today, 21 June, is the first anniversary of the shutdown of all mobile internet access in Myanmar’s Rakhine and Chin States. This is the longest internet shutdown in the world.#အင်တာနက်ဖိနှိပ်မှုဆန့်ကျင်ကြ #StopInternetShutdownMM #KeepItOn #365dayswithoutinternet pic.twitter.com/RxB7hzwfVf

The shutdown has been imposed in eight townships where, according to Amnesty International, crimes including war crimes were committed by the Myanmar military, as well as abuses by the Arakan Army, an ethnic armed group operating in western and northern Myanmar.

The human rights group said in a statement published last year after the restrictions first began:

The shutdown has created an information black hole in an area where the Myanmar military has committed serious violations – including war crimes – raising serious concerns about the safety of civilians. It is essential that the Myanmar authorities ensure the right to information in times of crisis.

The internet shutdown, along with restrictions on access by aid agencies, has meant that people in some villages are unaware of the Covid-19 outbreak, humanitarian workers told Human Rights Watch. Local groups report that the shutdown has made it difficult to coordinate the distribution of aid to conflict-affected communities, and to communicate with their field teams to ensure staff safety. A local editor said the shutdown greatly impedes media coverage of the fighting between the Myanmar military and the ethnic Arakan Army, making it hard for villagers to get up-to-date information.

Aung San Suu Kyi’s civilian government defended the shutdown, repeatedly saying that the shutdown is necessary due to the intense fight between the military and the Arakan Army. U Zaw Htay, spokesperson of the President’s Office, recently told Deutsche Welle the government understands the concerns of human rights activists, including the United Nations Commission on Human Rights, but security is a top priority in the area.

He said the government is providing all necessary help it can to the military to fight the insurgents.

On June 12, the ministry of Transport and Communications announced that the government will extend the network shutdown until August 1.

“We will restore internet service if there are no more threats to the public or violations of the telecommunications law,” said Soe Thein, the ministry’s permanent secretary, at a media briefing in Yangon.

In another development, a first information report (FIR) has been registered against Maung Saungkha, a free speech activist who received the Tulip Award from the Netherlands. He and five other activists were charged under Section 19 of the Peaceful Assembly and Peaceful Procession Law (PAPPL) for organizing a protest without notifying the police. They face up to three months in jail if convicted.

This is insane & unacceptable. @maung_saungkha , free speech activist from @athan_info and other 5 activists (unknown yet) being charged with 19 of PAPPL for the movement aganist #internetshutdown on 21st.

Advocacy  19 May 2022
END_OF_DOCUMENT_TOKEN_TO_BE_REPLACED
Cancel this reply