3G/4G services are not available in many places in Pakistan 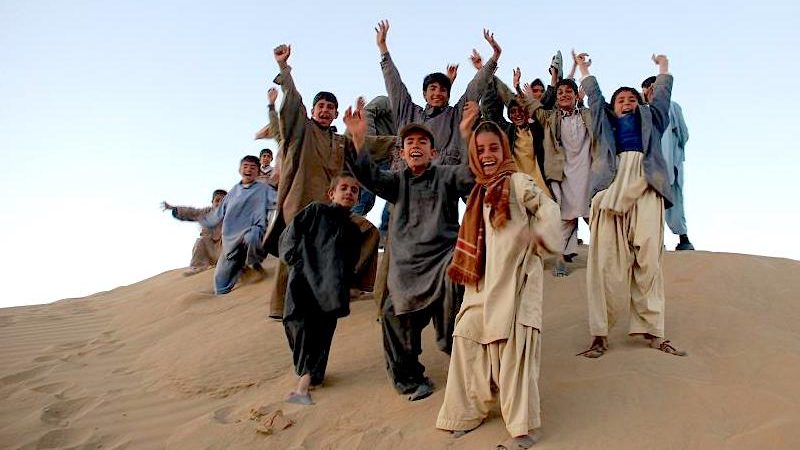 Kids in Baluchistan. Image via Flickr by Beluchistan. CC BY-SA 2.0.

Students across Pakistan have been protesting against the online classes organised by colleges and universities in the wake of the COVID-19 lockdown. It's not that they don't want to learn, but that they lack access: many areas in Pakistan do not have reliable internet service and most students can't afford to buy devices that facilitate online learning.

Nationwide protests on June 23 featured slogans advocating for justice and free internet for all. However, in Quetta, Balochistan, a number of students — many of them female — were manhandled, baton-charged and arrested, with many being dragged into police vans:

Picture 1: Students from Balochistan climbing a mountain to get signals for attending a class

Picture 2: Students in Quetta being arrested for demanding termination of online classes and provision of internet
Welcome to Naya Pakistan!#ReleaseAllStudents#SayNoToOnlineClasses pic.twitter.com/OK6B4XIcbX

As a result of the spread of COVID-19, Pakistan's Higher Education Commission asked educational institutions to shift to online classes from June 1. The countrywide closure of schools forced students living in hostels back to their homes, many of which are located in remote areas where 3G/4G internet connection are not available.

The lack of access had students coming out in their numbers to protest in every province, roundly rejecting the introduction of online classes:

There was zero work done on anything called “Online Class” in Pakistan. AND all of the sudden all school wants to go online …. despite they know the internet system of the region….???
.
.#Onlineclass

All students should have equal opportunities to get their money’s worth of education. Online classes cannot deliver that in the context of Pakistan. Poor students cannot afford Internet and facilities to take online class.
#wewant3G4G
#StopOnlineClass https://t.co/mvUm3t13fI

Arrests, however, only took place in Balochistan where human rights violations have drawn concern in the international community. For years, several thousands of people were subjected to enforced disappearances. The news soon went viral on social media, with the hashtag #ReleaseAllStudents trending, resulting in widespread condemnation of these incidents:

BREAKING:
Around 70 students arrested in Quetta for protested against online classes. Convenor of Students Action Committee, Muzammil Khan, BSO’s @jiandbaloch5 and @MahrangBaloch5 among the arrested ones. Police also used brutal force against the studnets. pic.twitter.com/Qx1oquKTVS

Mahrang Baloch, a medical student actively involved in student politics, posted videos of her being arrested by the police:

I am arrested along with other Peaceful students .we were protesting against online classes.police has beaten and arrested male and female students.This barbaric state doesn’t changed its behaviour towards oppressed nations .#SayNoToOnlineClasses pic.twitter.com/2VLfcQTG2E

According to police reports, the students were charged with organising a rally during a lockdown. Section 144 of Pakistan's Code of Criminal Procedure (CrPC) has allowed for a complete ban on gatherings as a result of COVID-19.

The spokesperson for the Government of Balochistan, Liaqat Shahwani, stated, “Students have temporarily been detained for their own safety against COVID-19 and will be released soon.” The Chief Minister of Balochistan, Jam Kamal Khan, however, tweeted that government did not order the police to arrest the students and that they should all be released immediately. All students were released subsequently.

Meanwhile, Akhtar Mengal of the Balochistan National Party raised the issue of online classes in Balochistan in the National Assembly, because there was no 3G or 4G service in the province.

No proper internet for online classes

Access to the internet is a fundamental right — but according to DataReportal, there were only 76.38 million internet users in Pakistan. The country's population, as of January 2020, was 212 million.

In fact, 3G/4G services are not available in many parts of Pakistan, including tribal areas, nor can everyone afford a laptop or smartphone. The divide is also gender-based: compared to men, fewer numbers of women have internet access.

Nighat Daad from Digital Rights Foundation tweeted about the importance of “internet for all”:

Would you scale a mountain to get access to Internet? Some students in former FATA do this every day in order to attend online classes. May be IT ministry should first focus on providing internet to all during pandemic instead of focusing on enacting new laws? #InternetForAll pic.twitter.com/soJqHwL5Nt

In the second week of June, students across Pakistan organised an online campaign under the hashtag #OnlineJaloos (online procession). Voicepk.net, an open platform dedicated to highlighting human rights concerns within Pakistan, created the hashtag in an effort to show the challenges students faced in attending online classes — including climbing mountains just to catch a signal.

Students living in the tribal areas of Pakistan also raised their voices to gain the government's attention on this issue:

Speaking at the #OnlineJaloos, Amir Ali from district Chiniot says he cannot benefit from online education because he does not have a laptop or any access to the internet at home. He demands a more inclusive education policy from @Shafqat_Mahmood.#RightToEducation pic.twitter.com/7C45M3UMNJ

Haris Shinwari from Khyber district says internet services have not been restored in his area since June 2016 despite promises and announcements by @IMMahmoodKhan. They are still forced to take online classes which is impossible for them.#OnlineJaloos #RightToEducation pic.twitter.com/V4S9s7jA8S

On June 16, students in Islamabad held a protest outside the Higher Education Commission (HEC) office to express their concerns about the closure of educational institutions and the resulting switch to online classes and exams.

HEC officials held a meeting with student representatives at its headquarters and assured them that the commission would look into their concerns. However, one of the meeting's attendees reported that even as an HEC official at the meeting assured the students that their issues would be resolved, he insisted that exams cannot be cancelled.