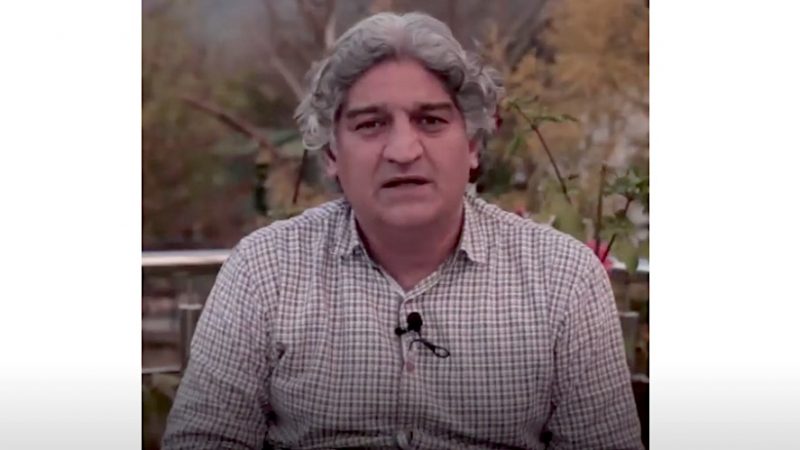 Matiullah Jan, a renowned journalist and critic of the Pakistan Military. Screenshot from YouTube video by Naya Daur TV.

On the morning of July 21, Matiullah Jan, a renowned journalist and critic of the Pakistan military, was abducted in Islamabad by unidentified persons. He was released about 12 hours later in the city of Fateh Jang, about 46 km away from Islamabad.

The journalist's family have accused state security agencies of being responsible for the kidnapping.

About a week before Jan's abduction, on July 15, the Supreme Court of Pakistan initiated legal proceedings against him for contempt of court over a “derogatory” tweet against the same court and its judges. In the July 13 tweet, Jan criticised seven of the country's ten Supreme Court judges after they dismissed the presidential petition accusing their colleague, Supreme Court judge Justice Qazi Faez Isa, of misconduct and living beyond his means.

The day after he had been kidnapped, July 22, Jan was scheduled to go to court to answer the contempt charges arising from his tweet.

Matiullah Jan had just dropped his wife to the school where she teaches when his car was intercepted. The incident, which was captured by the school's CCTV system, shows that there was a brief tussle, during which Jan threw his cellphone into the school's premises. His kidnappers were able to retrieve the phone, however, after which he was taken to an undisclosed location.

Once news of the kidnapping broke, Jan's brother and friends went to the school, retrieved the CCTV footage and released the video on social media. In short order, hashtags like #BringBackMatiullah, which called for the journalist's safe return, were trending on Twitter.

There were also pleas to end state interference in freedom of the press. Journalist Amir Mateen denounced pressure from the Inter-Services Public Relations (ISPR), the media arm of the Pakistan Armed Forces and other agencies.

I say this on record but our media activists are so scared of saying this in public. Come on guys! Say it. We are being controlled by agencies. We get calls from Ispr what we can say and what we can’t. I am jobless because I said No. Will you say it https://t.co/NnbqLmgLtd

Twitter user Naila Inayat reminded her followers about the disturbing frequency of other forced disappearances:

CCTV footage of journalist Matiullah Jan being taken away. Enforced disappearances are used by Pakistan as a weapon to silence dissenters. From Saleem Shahzad, Umar Cheema to Matiullah, it continues with impunity. #BringBackMatiullah pic.twitter.com/lkdeFUD3gr

Tweeting from his father's Twitter account, Jan's son demanded that the government bring him back, and that state agencies be held accountable for his disappearance:

Matiullahjan, my father, has been abducted from the heart of the capital Islamad. I demand he be foundُ and the agencies behind it immediately be held responsible. God keep him safe.

Speaking to the media, Jan's wife Kaneez Sughra said that when she called him around 1 p.m., one of his cellphones was switched off and he wasn’t answering the other one. “Everyone knows who picked him up,” she said, referring to state security agencies. She added, “It is no secret about those who have been after him for years.”

In 2017, Jan was attacked in Islamabad, but escaped unhurt. He and his children had been travelling to Bhara Kahu, 18 km away from Islamabad, when two motorcyclists coming from the opposite direction smashed the windscreen of his car by throwing a rock at it.

Jan's abduction has caused a stir in Pakistan, with the Islamabad High Court calling for an inquiry into his disappearance.

During a National Assembly session on July 21, opposition parties and journalists covering the proceedings staged a walkout as a sign of protest, and announced that they would continue to boycott all sessions of the lower house until the government discloses where Jan had been taken and identifies those responsible for it.

The boycott has now ended, although those questions remain unanswered.

Minister for Human Rights Shireen Mazari said on social media that she found Jan's kidnapping “very disturbing”, but was bashed by her followers, who saw it as her duty to ensure that Jan was rescued, not just tweet about it.

Meanwhile, the chairperson of the Senate Committee on Human Rights, Mustafa Nawaz Khokhar, tweeted that the Inspector General of Police would have to brief the committee on the incident:

As a matter of grave urgency and unquestionable importance, IG Islamabad has been asked to brief the Human Rights committee tomorrow on abduction/disappearance of renowned journalist Matiullah Jan pic.twitter.com/Dxgg8EVMSm

However, Senator Sherry Rehman, a member of the opposition Pakistan People's Party (PPP), suggested that this “nonsense” of Twitter condemnations by ministers needs to stop: “Don’t take appeals on Twitter to condemn it; you have to either act or resign.”

The Human Rights Commission of Pakistan, along with rights activists and journalism organisations, condemned the abduction and expressed concern over increasing attempts to control the media:

Attorney Shahid Abbasi, Jan's brother who is also acting as his legal counsel, said that he received a call from an unknown number informing him to pick up Jan from Fateh Jang. Jan later tweeted his gratitude for everyone who raised their voices in support of him:

I am back home safe & sound. God has been kind to me & my family. I am grateful to friends, national & int. journalist community, political parties, social media & rights activists, lawyers bodies, the judiciary for their quick response which made it possible.

In his court hearing, which went ahead as scheduled on July 22, Jan directly linked his abduction with his contempt of court charges, saying, “On one side, people are not allowed to speak and on the other hand, those who dare to speak are being served contempt of court notices.”

At his court appearance, Jan was given two weeks to prepare his defence.

While the Supreme Court directed the Islamabad Capital Territory (ICT) police to submit a report on Jan's abduction and subsequent release, it also asked,”What are the state institutions doing? No agency or institution has the right to take matters into its own hands.”

In its 2020 World Press Freedom Index, Reporters Without Borders (RSF) ranked Pakistan 145th out of 180 countries, quite an indictment on the state of press freedom in Pakistan.

Jan's kidnapping is not the first time that a journalist has been manhandled or abducted; in fact, Prime Minister Imran Khan's government has been accused of attempting to silence dissent. Several media houses have experienced a financial squeeze, which has resulted in several publications going out of print and a large number of media professionals losing their jobs.