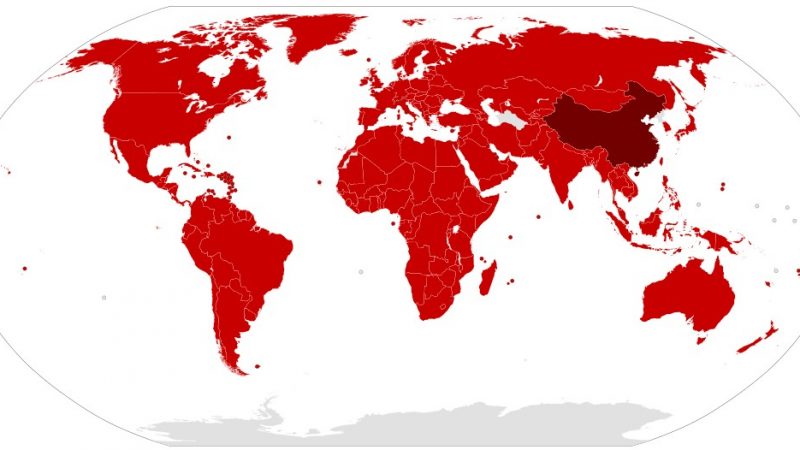 The following post is written by Dr. Fu Kingwah, associate professor at the Journalism and Media Studies Centre of the Hong Kong University and convener of censorship monitoring projects, Weibosocope and Wechatscope. The post was originally published on Meedan’s Misinfodemic Report on July 28, 2020. An edited version is republished on Global Voices with the permission of Dr. Fu and Meedan's Misinfodemic team.

China’s strategy to control COVID-19 narratives has become a global concern as the coronavirus has claimed more than 700,000 lives worldwide by early August. The origin of the virus has become a most contentious issue in international diplomacy and will likely continue to make an impact on the world's politics.

On March 12, 2020, China’s deputy director of its Ministry of Foreign Affairs, Zhao Lijian published an unusual tweet. It claimed that the United States army brought COVID-19 to China when the country participated in the October 2019 Military Olympic Games. The claim, if not a conspiracy, was not supported by any evidence. It spread like wildfire, becoming a global piece of misinformation about the origin of the pandemic.

A few days later, disinformation messages arrived on the cell phones and social media feeds of individual American citizens. One post read: “The Trump administration is about to lock down the entire country,” which the White House later said to be false. United States’ intelligence officials, who spoke with the New York Times on the condition of anonymity, have attributed the messages to Chinese operatives, and considered the tactic to be “unprecedented.”

Weiboscope, a censorship monitoring project that monitors the Chinese social platform Weibo for disinformation, misinformation, and censorship, has observed how the Chinese government exerts information control over COVID-19 narratives inside China since the early stage of the outbreak.

On the afternoon of December 31, 2019, a Weibo post read, “Wuhan pneumonia cannot be judged to be SARS. Wuhan has the only virus laboratory in the country and is also a world-class virology laboratory. There are ways to deal with the virus. If Wuhan can’t figure it out, no one can handle it.” It was swiftly censored within an hour.

The post mentioned both the SARS-like nature of the virus, suggesting its high infection rate, and the Wuhan laboratory, signaling the origin of the virus. Based on our knowledge of the government’s censorship system, both of these characteristics seem to be attributable to the decision to remove the post from the social platform.

At the time, social media was already seeing speculations that a new kind of pneumonia was linked to a SARS-like disease, according to Weiboscope data. Ophthalmologist Dr. Li Wenliang, who learned about the then-mysterious illness in a hospital, had sent a message in the popular Chinese private messaging app WeChat warning other medical doctors about the unnamed disease. Wenliang was then accused, along with another six people, of disturbance of public order by local authorities. He later died of the disease that would be known as COVID-19.

On December 31, 2019, the same day that post was removed from Weibo, and shortly after Wenliang’s warning, the Chinese government claimed that the “viral pneumonia cases” had “no apparent pattern of human-to-human transmission” and were “preventable and controllable.” It also informed the World Health Organization and the United States of those conclusions.

Less than a month later, on January 20, the Chinese central government announced the COVID-19 epidemic to the public. A group of leading Chinese virologists appeared on a state television program and confirmed that the virus was transmissible between humans.

Censoring virus-related messages in late December and early January may have put countless Chinese people unknowingly at risk of infection, depriving them of receiving early warnings from media and social media about the highly transmissible disease. The censorship and information control may have also delayed the general public’s response to take necessary and timely protective measures.

How does China control information?

Internet and digital technology have been profoundly shaping China’s social, economic, and political domains. Even though the internet is known to serve as an enabler for citizen activism, the state’s repressive power is remarkably strengthened by the means of digital technologies.

Chinese authorities have strongly emphasized the concept of cyber sovereignty, which broadly extends the notion of cybersecurity as a justification to control certain online activities viewed as a potential threat to the state’s stability. Against this backdrop, China has introduced a sophisticated system to regulate traditional and online media, and the system has been integrated into all internet platforms.

The Chinese government's large and sophisticated internet filtering system, along with its digital governance framework, is usually described as the “Great Firewall.” These stringent measures make the Chinese internet virtually an intranet, in which sensitive private and public communication are filtered, and access to foreign sites such as Facebook, Twitter, and YouTube are blocked.

Chinese citizens have little choice but to rely on local media, which are mostly state-owned, in order to receive information about COVID-19. International media or foreign social media sites are not accessible, and posts circulating foreign media reports are also censored. For example, our system records a censored post on January 18, which is attached with a screen capture of a coronavirus story titled “Four new confirmed cases in Wuhan; Estimated over 1,700 cases, according to expert” from the Hong Kong-based outlet Radio and Television Hong Kong. Another Weibo message titled “Express: Suspected cases with unknown pneumonia found in South Korea,” which was hyperlinked to a story of the Yonhap News Agency on January 8, 2020, was detected to be censored.

Moreover, surveillance technology, such as surveillance cameras, facial recognition, and identity tracking, which have been extensively used to assist the authorities’ monitoring of self-quarantine measures during the coronavirus outbreak, has further tightened social control.

To avoid crossing the so-called “red line” (an often invisible, unknown yardstick) which could trigger the censorship of content, the suspension and termination of user accounts, or police investigations and even jail sentences, Chinese citizens have retreated to self-censorship.

It is worth noting that the “red line” is opaque and its threshold and boundaries are largely unknown: Lifestyle “clickbait” articles have been blocked, rap music has been banned, television drama series have been disapproved of, and video game services have been stopped. Three Chinese volunteers were detained by police for uploading censored COVID-19 material to Github.

With China’s economic rise and growing global influence, the country has modernized its information systems and cyber warfare capabilities. For the second-largest economy in the world, information technology is not only key to both economic growth and the vital functions of society, but also national security.

China now operates the most sophisticated online censorship system in the world, with over 854 million online citizens under its sphere (CNNIC 2019 report). Apart from traditional warfare methods such as land, sea, and air, cyberspace has become a highly recognized domain of warfare to the Chinese government.

As it increases its engagement with the world, a struggle for controlling the narrative about the Chinese Communist Party and the country has expanded to global public opinion in an ambitious external propaganda project, and the internet is one of its battle spaces.

Apart from traditional forms of propaganda published on Chinese state media, there are now cases of organized and coordinated efforts of online influence campaigns on issues deemed of core interest and importance to the Chinese government, such as the detentions of Uyghurs in Xinjiang, the Taiwanese presidential elections, and the more recent Hong Kong protests.

At the time of writing, the COVID-19 pandemic is still developing, and the crisis changes daily, but it seems apparent that the world after COVID-19 will look different. Relationships between China and the world are anticipated to become bitter and more contentious.

China’s strategy to control information and its consequences has become a global concern. The US state of Missouri is suing China for economic losses and demand compensation from the Asian country due to negligence and lack of transparency in containing the virus in Wuhan.

China's information control on the narrative of COVID-19 has served as a wake-up call on how censorship in a country could impact the rest of the world. Yet, further development on exactly how COVID-19 would change China's diplomatic relations with the world remains an open question.