How the murder of musician Hachalu Hundessa incited violence in Ethiopia: Part II 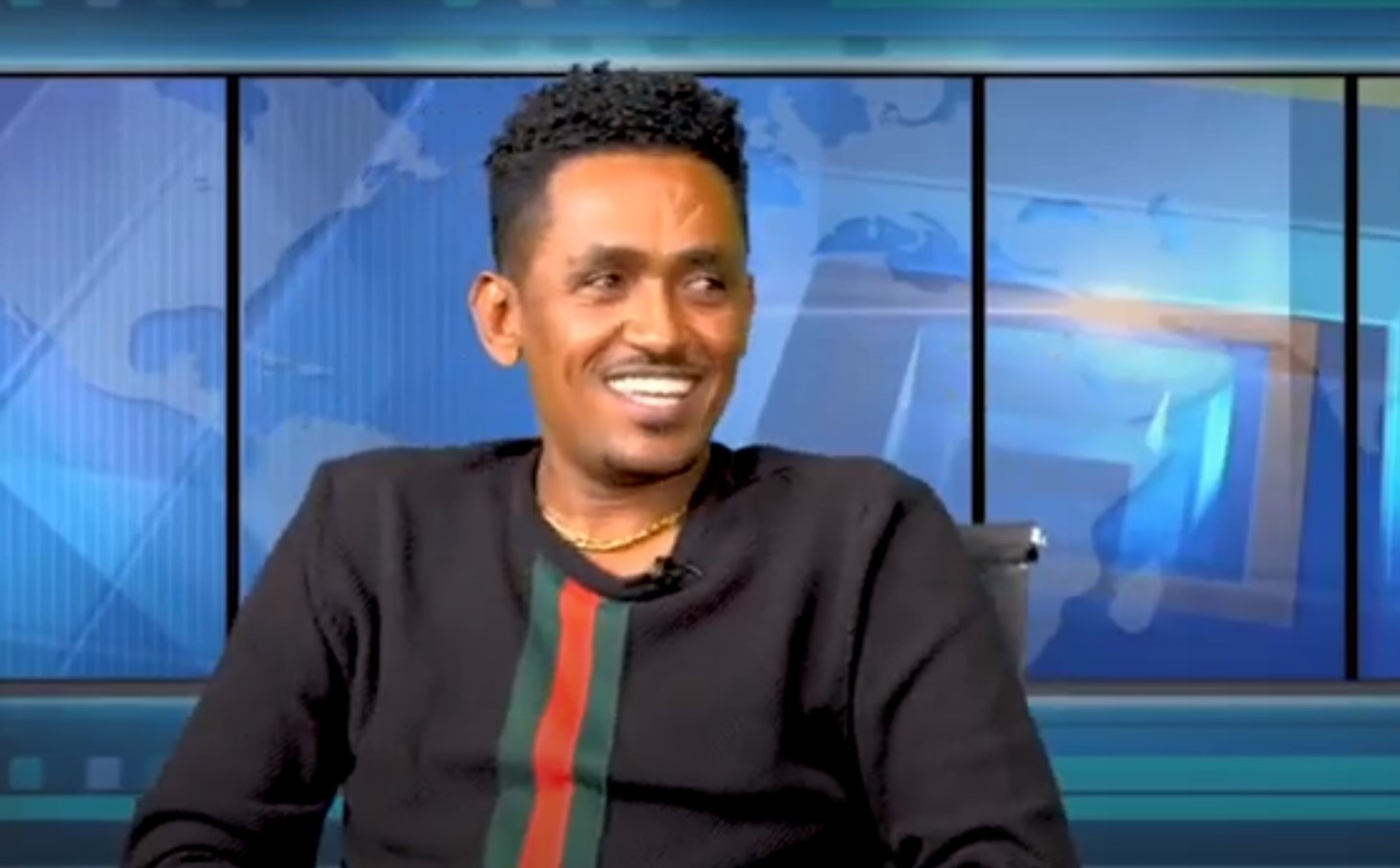 Hachalu Hundessa interview with OMN via Firaabeek Entertainment / CC BY 3.0.

Most of these conspiracy theories tap into the country’s divisive historical issues with incendiary words that pitted Amhara and the Oromo communities against each other. Hachalu was an Oromo who wrote critical songs and spoke openly of fractured politics in Ethiopia.

Stories began to circulate that Hachalu’s murder was orchestrated by government authorities — and by some accounts, by Prime Minister Abiy Ahemd himself, seen by many diaspora-based Oromo activists as a stooge of the Amhara people. The term neftegna or “riflemen,” is often hurled as a dog-whistle reference to Amhara people, Ethiopia’s second-largest ethnic group after the Oromo.

CARD analyzed the trend in use of inflammatory terms, ‘ነፍጠኛ’ (neftegna) and ‘ጋላ’ (galla), on twitter and found out substantial increase in October 2019 and July 2020, when violence occurred. pic.twitter.com/GECulI5Cru

Among these theories, one of the more popular claims holds that Hachalu’s disparaging remarks about Menelik’s II statue made during an interview with Oromia Media Network (OMN) a week before his killing incensed the “neftegna” and led them to assassinate him. (The statue has been a focus of tensions between the political elites of Amhara and Oromo).

Since Hachalu’s assassination, OMN has run several segments on YouTube and Facebook, with page viewership numbers ranging from 10,000 to over 200,000, that lay out different versions of this theory — that the Amhara were somehow involved in Hachalu's murder.

Proponents of this theory seem to cherry-pick lines from the consequential OMN interview to find the nuggets that fit their desired spin.

It was given further prominence when several top politicians—including Ilhan Omar a US Representative for Minnesota's 5th congressional district, home to the largest percentage of the Oromo diaspora community in the United States — possibly unwittingly retweeted a New York Times story about Hachalu’s killing with an insinuating quote:

The world isn’t kind to people who raise the political conscious of the public.

The music and activism of Hachalu Hundessa provided hope to the Oromo people and so many others.

May he rest in power.https://t.co/V19dngZT3T

At the same time, false and misleading claims bubbled up in a debate over where Hachalu should be buried. Some diaspora-based Oromo activists asserted that government authorities pressured Hachalu’s family to hold his funeral in Ambo, his hometown. Others accused authorities of rushing the funeral in Addis Ababa, to hide criminal evidence. These claims further inflamed ethnic tensions. Hachalu’s family and close friends tried to dispel these claims by notifying the public that it was their decision, in fact, to bury their son in Ambo.

After the violence and destruction of properties targeted non-Oromo, non-Muslim families in parts of Oromia, many netizens viewed it as the inevitable result of specific speculations and innuendos about the ethnic identity of Hachalu’s killers — spread mainly via Facebook and OMN.

- “Amharas need to be exterminated in our neibourhood.” pic.twitter.com/VwsLZPJoYv

Meanwhile, members of the Oromo diaspora community continued to emphasize the violence committed by government forces perceived as dominated by the Amhara elite.

Other netizens say that local authorities in Ethiopia are complicit in the organization of vigilante groups — activists and political groups — who are actively stoking ethnic and religious resentment on- and offline.

Putting together the political puzzle

While massive speculation continues to churn on social media, government authorities have issued one theory regarding Hachalu’s murder that that appears to be supported with some evidence.

Authorities are now pursuing a theory that the murder was carried out by two opposition groups with different motives but who may share a belief that Hachalu should be assassinated. The first group is Tigrayan People's Liberation Front (TPLF) and the second group is OLF-Shane.

The TPLF (once part of the now-defunct Ethiopian People's Revolutionary Democratic Front) controlled Ethiopia’s security and intelligence services for 27 years before they were ousted from power in April 2018. Hachalu was an outspoken opponent of the TPLF regime and spent most of his life fighting against them.

In 2017, in a nationally televised concert, aimed mainly at helping members of the Oromo community who were displaced from the Somali region, he courageously and explicitly criticized the TPLF.

Politically speaking, the TPLF associates Abiy with imperial Ethiopia, alleging that Abiy conspires to bring back its relics to the government. They benefit from the assertion that recent violence is the fault of Abiy’s government, who failed to provide national security.

Abiy’s administration, in turn, denies such allegations and puts the blame on the TPLF, whom they accuse of wanting to wreak chaos and push for regime change in Ethiopia.

OLF-Shane is a splinter paramilitary organization of OLF that uses violent tactics to advance its political aim to establish an independent Oromia. The group has reportedly run shadowy death squads who call themselves Abbaa Torbee, – an Afan-Oromo phrase meaning, “Whose turn is this week?”

Abbaa Torbee has an active presence on Facebook. There are hundreds of user account profiles and roughly 28 pages and numerous groups devoted to this violent extremist group. Nearly all pages and user accounts were created over the last two years, as various factions of OLF were welcomed back to Ethiopia from exile and attracted tens of thousands of followers on Facebook.

In the months leading up to Hachalu’s assassination, Abbaa Torbee members intimidated, beat up, and, in some cases, killed sympathizers of the ruling Prosperity Party, both civilians and foreigners. They think these groups unfairly exploit Oromo peoples’ resources

Abbaa Torbee seemed to hold some inside knowledge about the chaos that followed Hachalu’s murder. Most notably, on one of their most popular pages, they warned that they will start “cleansing Addis Ababa” a day before Hachalu was murdered.

Turmoil indeed transpired in Addis Ababa and ethnic and religious minorities faced violence in parts of Oromia. The same page posted a close-up picture of Hachalu's corpse within hours of his assassination, accusing government authorities of killing him.

Also, several Abbaa Torbe Facebook pages have called for Oromo protesters to march to Addis Ababa and haul down the statue of Menelik II. 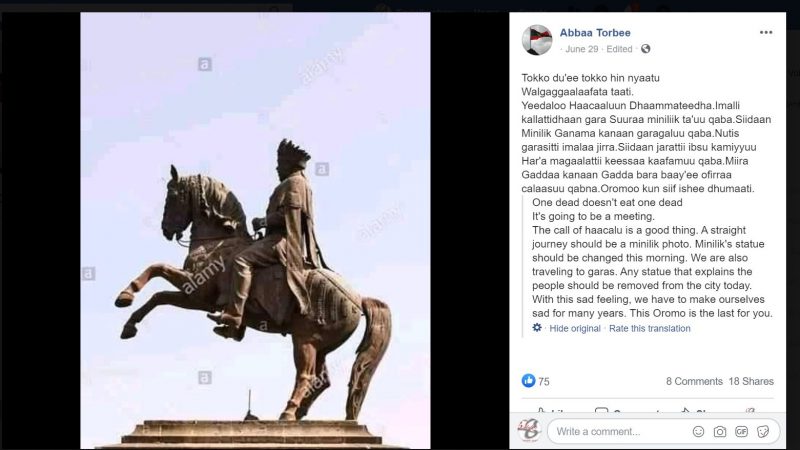 To close observers of Ethiopian disinformation campaigns, this all sounds wildly familiar. Think back to the summer of 2019, when intra-ethnic rivalries among the Amhara elites ended with the assassinations of top government officials in the Amhara region. Facebook accounts associated with Amhara nationalists spread rumors that said the assassinations were part of a plot created by Oromo elites to wipe out the leadership of the Amhara people.

Similarly, disinformation campaigns about the tragic murder of Hachalu reflect a bitter divide within Oromo elites.

On the one hand, there are those who attributed Hachalu’s assassination to Amharas, rooted in the interpretation of the modern Ethiopian state as an Amhara settler-colonial project — and Hachalu’s murder is the continuation of that project.

On the other hand, there are those who believe Oromos played an integral role in building the modern Ethiopian state and Hachalu’s assassins want to shore up their dwindling political fortune by killing an Oromo icon — and pursue their political project of separatism.