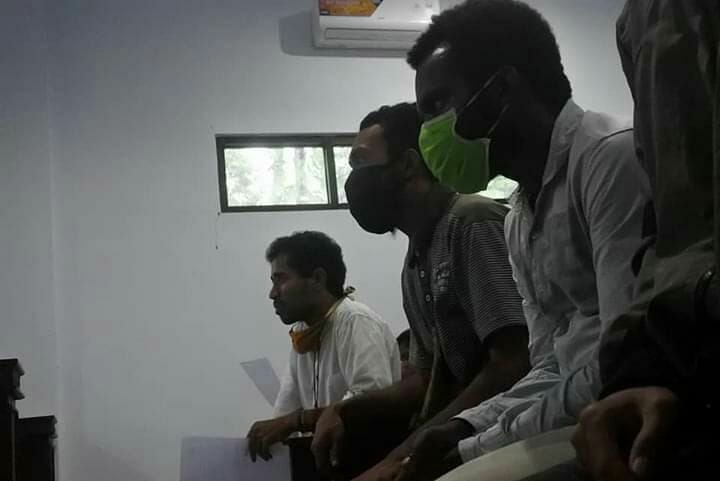 Expelled students during a preliminary hearing for the administrative case they filed in Ambon. Photo from Facebook page of the student group PEMBEBASAN, used with permission.

Arbi Nur was one of four students who were expelled from Khairun University in Indonesia after they joined a protest in December 2019 supportive of Papua, Indonesia's largest and most eastern located, and predominantly Christian province. Their expulsion is currently under appeal, but Arbi Nur learned on July 13 that the police has charged him with ‘treason’ and ‘public provocation’. Human rights groups are calling for the dropping of cases against him, and the reinstatement of the students at the university. Global Voices author Mong Palatino interviewed Arbi Nur about his case through a Twitter conversation on August 12.

From protest to expulsion

Arbi Nur and fellow students Fahrul Abdullah W. Bone, Fahyudi Kabir, and Ikra S. Alkatiri joined a protest on December 2, 2019 in Ternate City calling for the release of Papuan political prisoners. The protest was violently dispersed by the police and the four were detained for 27 hours.

Ternate is part of North Maluku province, which is a neighboring island to West Papua and Papua provinces, both located in the east of Indonesia. It is also a place where many Papuan students are studying for college.

West Papua and Papua are part of Indonesia but some groups are demanding that the government recognize Papuans the right to self-determination. The conflict has lasted for many years already, with Papuan activists accusing Indonesian troops of committing widespread abuses in the region.

As of June 2, there are around 51 prisoners of conscience from Papua according to the monitoring of Amnesty International. Most are political activists and human rights defenders facing treason charges.

Despite the fact that the protest was not held on the campus, the rector of the Khairun University dismissed the four students based on a notice sent by the police. The rector’s decree stated that the four had “tarnished the good name of the university, breached the ethics of being a student, and threatened national security.”

The notice of dismissal was received by the students in March only. They challenged the dismissal by filing a petition at the administrative court in Ambon, the capital of the Maluku Islands province.

After the appeal petition was filed, a treason case was lodged by the Ternate police against Arbi Nur. The notice was sent by the police to the Ternate district attorney's office on July 13. If found guilty, Arbi Nur could face up to 20 years in prison.

An act of makar (treason) allegedly committed by a person must be proven and ruled on by a court. A simple notification from the Kapolres (police chief) clearly cannot be used as a formal legal reference.

The public defender also insisted that Arbi Nur did not commit a crime:

Arbi also spoke out about [human rights] violations against the Papuan people. Once again, the demonstration was peaceful, orderly and there were no blunt or sharp weapons, firearms and no violence was committed against persons or property.

Nanang Kosim, spokesperson of the Indonesian People's Front for West Papua or FRI-WP, told Radio New Zealand on August 10 that activists like them are often beaten and yelled at for being ‘traitors to the nation’. Arbi Nur is a member of FRI-WP which has chapters in a growing number of universities.

Khairun University should support academic freedom and free expression, not expel students peacefully expressing their views. (It) should let the students return to their studies this semester and ensure a university environment that promotes free expression.

Indonesian students becoming engaged in the West Papuan human rights struggle are under pressure from authorities.

Four Indonesian university students have been expelled for protesting against human rights abuses in Papua.https://t.co/gbBcjf59UP

Through a direct message on Twitter, this author reached out to Arbi Nur who shared his thoughts about the treason case:

I am not surprised and afraid when I learned about the treason case. I am ready to face this accusation. Treason charge is often used by authorities against Papuan activists and non-Papuan solidarity activists. An example is the conviction of Surya Anta (who was found guilty of treason for organizing a protest against racism). And the impact is the silencing of freedom of expression.

He also wrote about his expulsion from the university.

Campus should be independent. Campus should not accommodate political interest from outside (referring to the police action). The university bureaucracy doesn't have authority to intervene in student political activities inside or outside campus.

He also belied the claim of the Indonesia government that it upholds human rights and democracy in Papua. He pressed for greater global attention about the situation of activists in Papua and the need to make the Indonesian police accountable for its alleged human rights atrocities in the region.