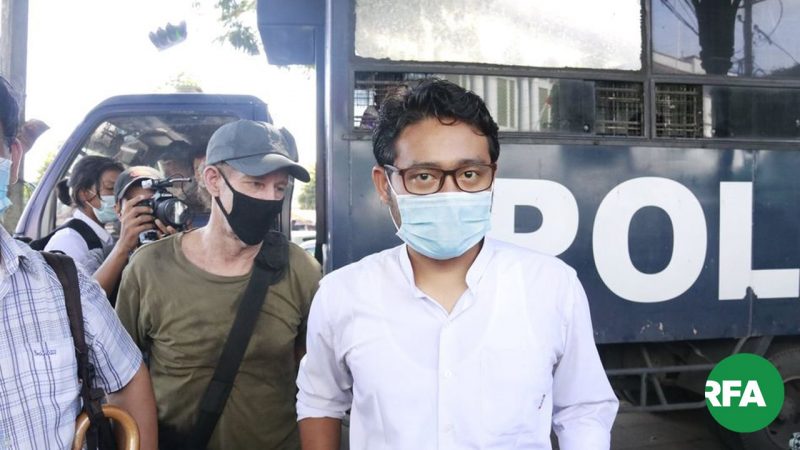 A local Myanmar court has convicted poet and activist Maung Saungkha for violating the Peaceful Assembly and Peaceful Procession Law.

Maung Saungkha, a co-founder of the research-based free expression advocacy group Athan, was charged in relation to a June 21 protest in Yangon City which featured the unfurling of a banner that read: “Is the internet being shut down to hide war crimes and killing people?”

Maung Saungkha appeared at six hearings between July 7 and August 21. A police officer testified against him, saying the activist had organized a protest without informing authorities. His sentencing was announced on September 4, when he was asked by the court to choose between serving a 15-day jail term or paying a fine of 30,000 Kyat (US$22.50). He opted for the latter.

Court implied a fine of the 30,000 MMK or 15-day imprisonment sentence to me today for organizing a campaign demanding an end to internet shutdown in Rakhine and Chin States. Thank you everyone for your support ✊@pen_int @HRWBurma @amnesty @article19asia @accessnow @athan_info pic.twitter.com/wHOJXRzdxg

June 21 marked one year since internet and communication networks were restricted in Myanmar's Rakhine state following clashes between the Myanmar military and an ethnic armed group. Local telecom operators said they were directed by authorities to restrict 3G service in the area until October 2020.

Athan and other civil society groups have been petitioning the government to restore full internet connectivity in Rakhine, especially as local residents need to access vital public health information about COVID-19.

In an email to Human Rights Watch on August 12, Maung Saungkha had bemoaned the continued use of laws that undermine freedom of expression:

I don’t see any signs or attempts to improve the freedom of expression in Myanmar. In my opinion, the government prosecutes people for protesting against the internet shutdown because it still wants to have the internet cut off in those areas.

Myanmar’s ruling party, the National League for Democracy, came to power in 2015 in a landslide victory. It was led by prominent opposition figures in the democracy movement which fiercely opposed the military dictatorship.

Maung Saungkha’s conviction is another indicator of the NLD’s failure to reverse the policies used by the previous military government to stifle dissent.

According to Athan’s research, 91 criminal complaints under the Peaceful Assembly Law have been filed against activists, students, and peaceful protestors since 2015.

Ismail Wolff, regional director of Fortify Rights, emphasized that Maung Saungkha should not have been prosecuted for simply protesting against a policy of the government:

Maung Saungkha may not be in prison this time around but he should never have been arrested in the first place or faced trial simply for defending human rights. These arrests and convictions are part of a systematic attempt to silence those who speak out against human rights abuses.