'Social media played a part in mobilizing the population' 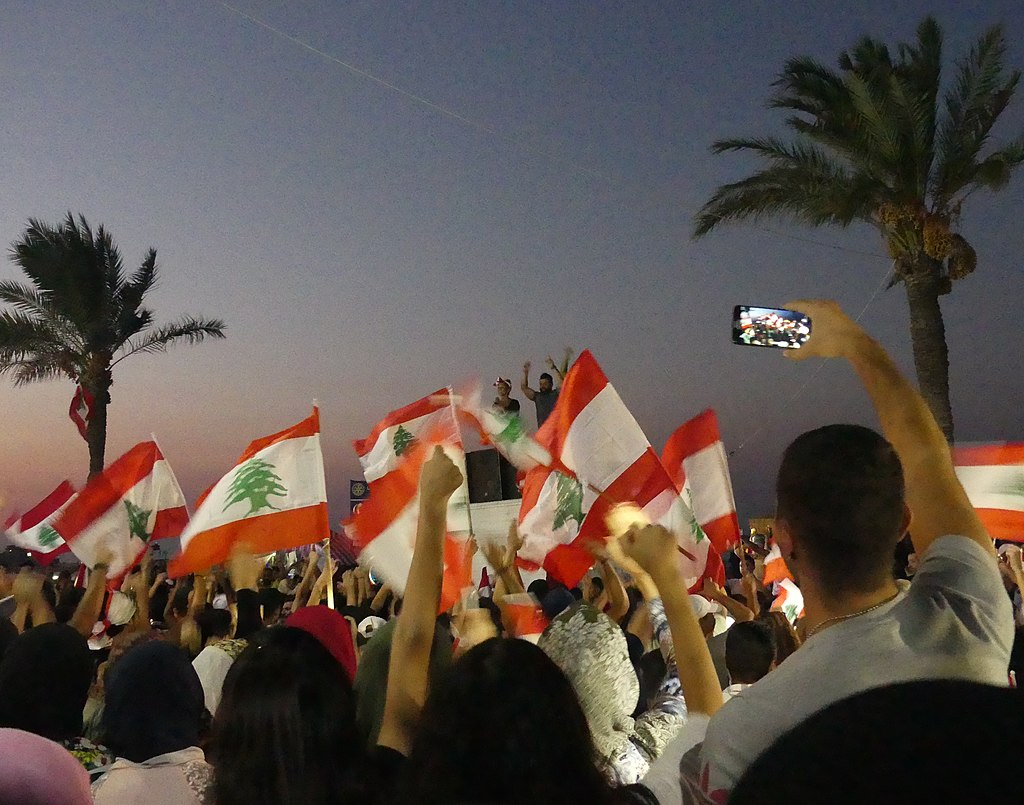 Protestors in Tyre, Southern Lebanon, cheering to a female singer during a demonstration against government corruption and austerity measures on October 22, 2019. Credit: RomanDeckert via Wikimedia / CC BY-SA  4.0.

Editor's note: This article is part of UPROAR, a Small Media initiative that is urging governments to address digital rights challenges at the Universal Periodic Review (UPR).

As new protests erupt in Lebanon, online repression is set to continue.

In recent weeks, protests escalated as the country is crippled by the dire spill-overs of the 4 August Beirut port blast which damaged the city and left tens of thousands of people homeless in the Lebanese capital.

In the face of a reported death toll of 190 dead and more than 6000 injured, the population revolted against the political elite’s long-denounced graft over the government’s negligent mismanagement of the thousands of tons of ammonium nitrate that were reported to be the cause of the explosion. Dumped for six years in a compound of Beirut’s port, the ammonium nitrate was stored next to 15 tons of fireworks and several jugs of kerosene and hydrochloric acid, setting the stage for the 4 August tragedy.

So far, the Lebanese authorities have met with repression the population's demands for major political overhaul.

Government crackdown on the streets has been coupled by repression online. As critics to the political elite’s ingrained corruption skyrocketed across the internet, Lebanese authorities prey on online digital spaces — from social networks to messaging services — to restrain freedom of speech and opinion online and mitigate anti-regime outbreaks, a practice which has been long denounced by activists and human rights defendants.

Since 2015, when anti-government protests rocked Lebanon over authorities’ mismanagement of waste, human rights activists have witnessed a surge in online repression against dissenters.

On October 17, 2019, another wave of nationwide protests erupted, unveiling the population’s deep-rooted discontent. Yet again, protesters hold the corrupted political elite responsible for driving the country to the brink of collapse.

This time demonstrations were sparked by the government’s attempt to introduce new taxes, including an umpteenth tax proposal on voice calls made through internet services such as WhatsApp, a freeware mobile application for messaging that is widely used in Lebanon, especially among young adults. Soon, the grievances turned into the largest anti-regime unrest that the country experienced in more than a decade.

As societal turmoil spiraled, the government’s online repression intensified. While social media and WhatsApp have been extensively leveraged by demonstrators to organize, document, and sprawl the protest, Lebanese authorities have resorted to identifying and persecuting dissenters based on their online activities.

Social Media Exchange (SMEX), a Lebanese nongovernmental organization that advocates for digital rights in the Middle East and North Africa, tracked the recent soaring of state’s repression using Muhal, an observatory for the documentation of violations of online freedom of speech, reporting approximately 44 cases between October 2019 and August 2020.

Social media played a part in mobilizing the population during the mass protests; at the same time, we witnessed the increase of threats on the digital space with the calling in for investigations of many activists at the hands of different security agencies.

Ever since the garbage crisis in 2015 spurred the anti-establishment demonstrations, the government’s response to corruption and mismanagement allegations has been to stifle criticism and dissent on the current political and economic crisis, Human Rights Watch denounced in a November 2019 report.

The government’s repression strategy has widely relied on criminal defamation laws, which punish critics against the army, president and public officials, with up to three years of imprisonment.

According to the evidence gathered by Human Rights Watch, the use of these laws to silence online speech has skyrocketed in recent years, with a prevalence of cases of defamation filed by “powerful local individuals” who were accused of “allegations of misconduct, corruption, or fraud.” Leveraging its controversial criminal defamation laws, state authorities are prosecuting people on charges of tarnishing the state’s image by defaming state representatives’ reputation.

On the legal side, “Lebanon only offers conditional protection to freedom of expression, both offline and online, which enables judicial and non-judicial bodies to impose restrictions,” al-Shafie says. “Although Lebanon has signed a number of international conventions and treaties affirming its commitment to protecting freedom of expression, its laws fall short.”

On June 15, Lebanon's National News Agency reported that the Anti-Cybercrime and Intellectual Property Rights Bureau (Cybercrimes Bureau) has been put on the lookout for social media posts that violate criminal defamation laws by insulting the president, Amnesty International says. The risk is that this operation may further escalate the attacks on free speech perpetrated by state authorities, resulting in increased arrests and investigations.

On SMEX's Muhal, most cases of online repression look the same. Recently, Raed al-Masry, a professor of political and international studies, and Alwan Amin al-Din, the founder and director of the Sita Center for Studies, were summoned by the Cybercrimes Bureau on August 3, for an article written by Masry and published on the center’s website. The piece accused the president of the Lebanese University, Fouad Ayoub, of corruption. After they appeared before the bureau, both defendants were later released.

In a similar case, an anonymous report exposing fiscal fraud at Lebanon’s Central Bank was disclosed by journalist Dima Sadek and released on the independent media platform Daraj. Later, Sadek was contacted by the Cybercrimes Bureau on May 18, as she was being investigated on the charge of “undermining the financial status of the state,” under Article 319 and 320 of the penal code, SMEX’s sources highlight.

The complaint was filed by Riad Salamé, the governor of Lebanon’s Central Bank. SMEX reports that according to available sources, Sadek was questioned for 5 hours; as of today, there are no further updates on the case.

As protesters continue to use WhatsApp chat groups to organize and coordinate demonstrations, Lebanese authorities have started infiltrating these groups. According to insights gathered by a US-based national public radio (NPR) investigation, authorities use this strategy to identify and persecute protest leaders. The strategy has created fear among participants and protesters, whose identity and anonymity are at risk.

Arbitrary arrests and interrogations over online activities, social media posts, and WhatsApp chats jeopardize not only the life and the freedom of speech of journalists, activists, and protest leaders but the future of protests themselves. “Now, many young people feel that there are no results happening to the action they are doing. Because of the Lebanese authorities’ tactics, disengagement increased,” al-Shafie said.

“After Beirut port explosion on August 4, we witnessed many coming back to the streets to protest the political elite and the people in power, whose corruption led to this massive explosion,” she adds, “Yet, the situation in Lebanon is always changing, and with the COVID-19 on the rise, we cannot guess what is going to happen.”

Now more than ever, digital security and rights remain crucial for securing citizens, journalists, and activists’ freedom of speech and safeguard their rights to protest amid the mass uproar.