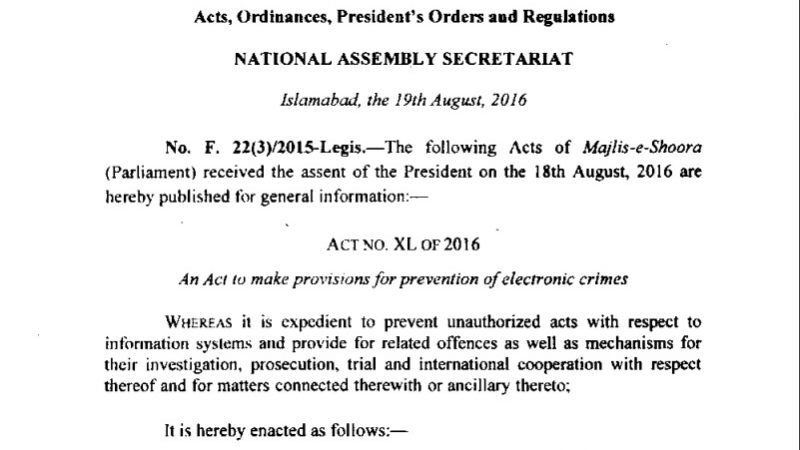 Prevention of Electronic Crimes Act (PECA) was passed by the National Assembly of Pakistan in 2016. Screenshot from the Act.

Three Pakistani journalists were charged with sedition between September 11 and 16 under Pakistan's 2016 Prevention of Electronic Crimes Act (PECA), a law that has drawn widespread criticism for impacting citizens’ rights to expression and privacy.

The journalists are Asad Toor, a producer of a prime time TV show called “Sawal with Amber,” which is often critical of the government and the military; Bilal Farooqi, news editor of the Pakistani daily The Express Tribune; and Absar Alam, a former chairman at the Pakistan Electronic Media Regulatory Authority (PEMRA) and a former anchor at AAJ news channel.

Toor was booked following a complaint filed by someone called Hafiz Ehtesham Ahmed, a resident of the city of Rawalpindi, who claimed that the journalist “used derogatory language to refer high-level government institutions, including the Pakistan Army.” Toor posted a copy of the complaint on social media:

Ok #Rawalpindi police charge me under PECA and registered this FIR on 12 September 2020 on the complaint of proxy Hafiz Ehtisham. Here is the copy of the FIR. This is a sad development for me being a journalist because I never wish to be a news myself.#Pakistan @ICJ_Asia @rcfp pic.twitter.com/fBVVwmTmNZ

Toor told Global Voices via WhatsApp that the First Information Report (FIR) was registered under sections 499 (defamation), 500 (punishment for defamation) and 505 (statements conducing to public mischief) of the Pakistan Penal Code, and sections 11 (hate speech), 20 (offences against the dignity of a person), and 37 (unlawful online content) of the 2016 Pakistan Electronic Crimes Act (PECA).

Farooqi was detained outside his home on the night of September 11 after a complaint was lodged by a resident of Landhi, Karachi, alleging that Farooqi shared “highly objectionable material” and “defamed” the Pakistan Army on his Twitter and Facebook accounts.

Farooqi was released in the early morning of September 12 on a “personal guarantee” of his lawyer Jibran Nasir.

A similar FIR was filed against Alam in the city of Jhelum by Khursheed Alam, a lawyer, who claimed Alam used derogatory language against state institutions and personalities on his Twitter account and asked that he should be charged with sedition.

Both Farooqi and Alam are facing charges under Section 20 (offences against the dignity of a person) of the 2016 PECA.

Alam said that these charges and cases are a medal for him and he won't be pressured.

Facing a trial of treason is an honour in the struggle against a fascist regime. If Musharraf could not suppress us, my love, then what does General Bajwa think? Give Receipts #Bajwaleaks

“Show us the receipts” in this context refers to an investigation by website Fact Focus that exposed corruption in the Pakistani military.

According to a report by Freedom Network, there have been more than 90 cases of attacks and violations against journalists in Pakistan between May 2019 and April 2020.

I can't even begin to express the absurdity. Defamation sections from the PPC and Sections 11 and 20 of PECA (both non-cognisable) fit pattern in FIRs. But what's new is the addition of Section 37 which is not even an offence under PECA! What creativity.https://t.co/a3HeQd65tx

A day ago I saw this news item that an FIR has been registered against me for being “Anti state and for propagating against the army on social media”. Very similar to the way @bilalfqi @AbsarAlamHaider @AsadAToor have been targeted. Such tactics will not silence me. pic.twitter.com/2nbsgJZ3xl

The Human Rights Commission of Pakistan issued a statement in solidarity.

The alarming increase in such actions against journalists confirms that the government is bent on muzzling freedom of expression. HRCP demands that the rights of citizens be respected and that both the government and state adopt course correction.

Former Supreme Court judge Justice M B Lokur stated on September 14, 2020, that “the government is using the sedition law with an iron hand to curb free speech in an overreaction to people's opinion.”

Mocking the military now a crime

On September 17, Pakistan's National Assembly passed an amendment to the penal code that criminalises attempts at ridiculing armed forces personnel.

The bill was proposed by MP Amjad Ali Khan from the ruling party PTI. The bill states that “deliberately mocking, tarnishing or defaming the armed forces or its members would be considered a crime. Those who do so could face up to two years in prison and a fine of Rs 500,000 or both.”

The new Bill criminalizing criticism of the army is a fascist attempt by the military to transform Pakistan into North Korea, where none can question its wrongdoing/ criminality; where impunity for it is written in law. I warn ALL parliamentarians against even THINKING about it.