Demand to probe Indian leadership of Facebook has been raging 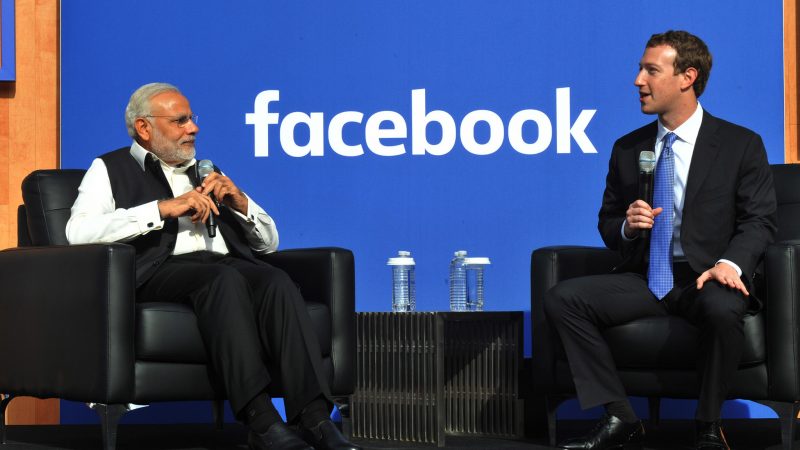 Indian Prime Minister Narendra Modi with the CEO of Facebook, Mark Zuckerberg in the USA (2015). Image from Flickr by Narendra Modi. CC BY-2.0.

On September 16, Facebook India’s chief issued a statement denying accusations that the social media giant is making profits by giving a platform to hate speech in India. The clarification comes weeks after the Wall Street Journal (WSJ) reported that the tech giant refused to take down posts by members of India’s ruling party—the Bharatiya Janata Party (BJP)— which flouted its hate speech rules.

Facebook has been embroiled in a controversy of fuelling hate speech in India after the WSJ reported that the company chose to look the other way, even after an anti-muslim post by a member of the right-wing BJP was brought to its notice. This, WSJ reported, was done to protect its business interests in the country.

The BJP leader in question is T Raja Singh, a legislator from the Indian state of Telangana. The WSJ report highlights the posts by Singh wherein he labelled, Muslims as ‘traitors’ and reportedly said that Rohingya Muslim refugees in India should be ‘shot’. These posts were not taken down due to opposition from Ankhi Das, the head of public policy at Facebook India, according to the same source.

Das opposed designating Singh as a ‘dangerous individual’ on Facebook. She reportedly argued that ‘violations by the politicians from Prime Minister Narendra Modi’s party could hurt the company’s business interests in the country.’

After facing severe backlash from opposition parties in India over its alleged bias in favour of the ruling party, thereby promoting violence and hate speech on its platform, the social media company banned Singh earlier in September. Explaining the delay in banning the politician from its platform, Facebook told CNN, ‘the process of evaluating the potential violator is extensive and that is what led us to our decision to remove his account.’

However, Singh claimed that he has not had a Facebook account since April 2019, and therefore, there is no question of banning him. Singh further added that he had written a letter to the state’s cybercrime department on October 8, 2018, informing them that his official verified Facebook page was hacked.

In a statement to the Times of India, Ajit Mohan, Managing Director of Facebook India said that the company does not profit from hate speech of any kind. He further added that there is no constituency that benefits from hate speech and that Facebook tries its best to enforce its community standards. Mohan also offered a clarification on the role of Ankhi Das. He said that Das leads a public policy team which is separate and independent from the content policy team. He added that, in this specific case, the public policy team in India was not a decision-maker.

On September 2, Mohan also appeared before the Parliamentary Standing Committee of India which is headed by Congress leader Shashi Tharoor to address questions on ‘’safeguarding the rights of the citizens’’ and ‘‘the misuse’’ of the platform.

Facebook is also facing a probe from New Delhi’s legislative assembly. The government committee of New Delhi was formed to investigate the role of hate speech on the social media platform and its link to the Delhi riots. The social media giant, however, moved to the Supreme Court of India, seeking exemption from appearing before the legislative assembly on the ground that it has already appeared before the parliamentary panel of the country and that the regulation of tech giants falls within the ‘exclusive authority of the Union of India.’

Meanwhile, the demand to probe Indian leadership of the tech giant has also been raging. However, there is no information in the public domain as to whether Facebook has set up a high-level inquiry to investigate whether it is indeed making profits by giving a platform to hate speech from members of the ruling party.