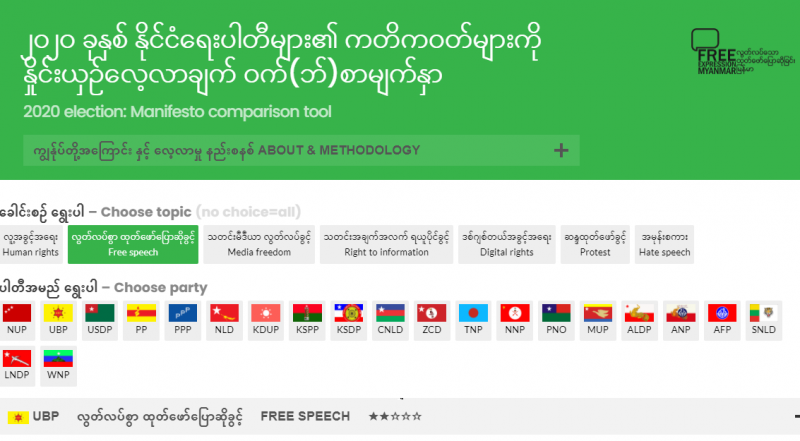 Free Expression Myanmar (FEM), an NGO advocating for freedom expression in Myanmar,  has launched a digital tool enabling voters to read and compare the human rights programs of political parties.

Myanmar’s election is scheduled for November 8.

There are 90 parties competing in the election.

FEM clarifies that it is neither endorsing any party nor it is claiming that the promises made by parties will be implemented after the election. FEM Director Yin Yadanar Thein said the tool is meant to simply inform voters:

Our aim is to give the electorate complete, verified, and comparative information about the political parties’ human rights promises – or lack of promises – so that voters can make a fully informed decision in this vitally important election.

The tool lists the programs of each party for a particular human rights topic and compares it with its stands in the 2015 election. FEM gives a rating of 5 stars if the current program is comprehensive and adheres to international standards, while one star is given if there’s no explicit commitment.

Aside from providing readers with an overview of the human rights agenda of parties, the tool can show if a party has adjusted its stand on a particular issue since the previous election.

For example, the program of the Union Solidarity and Development Party or USDP to address hate speech in 2015 was limited to preventing bullying and discrimination against women. But their program this year included a reference on combating religion-based violence. USDP, a military-backed party, ruled Myanmar from 2011 until its defeat in 2015. 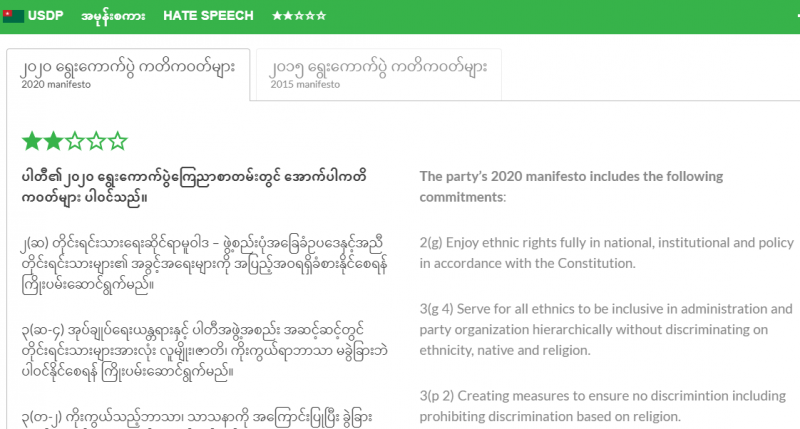 The Shan Nationalities League for Democracy had no program for media freedom in 2015 but it got five stars this year for its strong pledge to protect free speech: 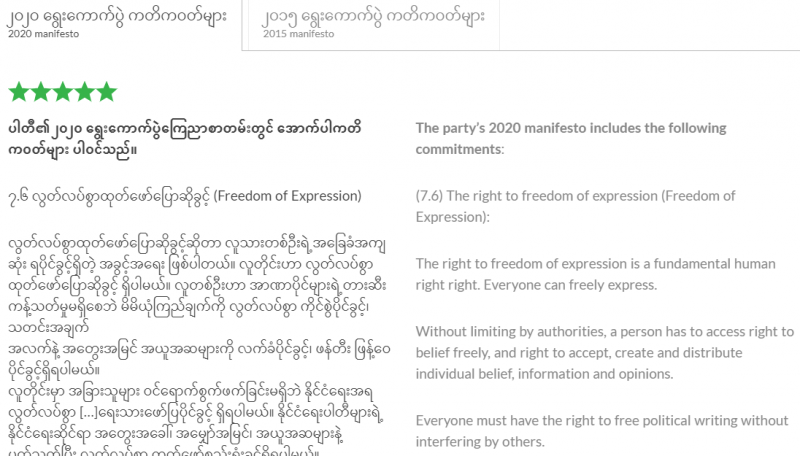 Meanwhile, several commitments made by the ruling National League for Democracy (NLD) in 2015 are missing on its agenda for this year’s election. 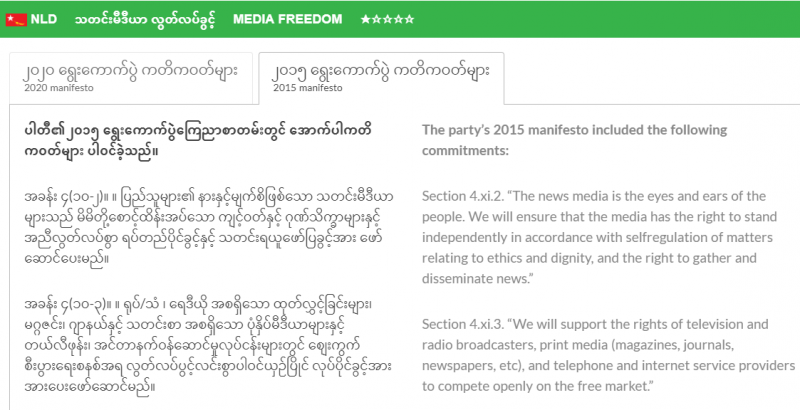 This lack of pledges reflects statements and reports from activists and civil society groups critical of the failure of the NLD-led government to reverse draconian policies of the previous military regime. They point out that critics continue to face arbitrary arrests and prosecution based on military-drafted laws like 66(d) of the 2013 Telecommunications Law. Artists and activists who protest against military abuse are jailed for violating the law that prohibits insulting the Tatmadaw (Myanmar armed forces).

Despite some positive reforms in the early years of the current administration, a number of laws that arbitrarily restrict the rights to freedom of expression, association and peaceful assembly remain on the books and continue to be regularly used to arrest, prosecute, detain and imprison human rights defenders, activists, and others peacefully exercising their human rights.

As Myanmar heads toward a general election on 8 November 2020, it is imperative that political parties, parliamentary candidates, and campaign groups focus on the urgent human rights situation in the country. The next government must champion human rights.