The real impact of COVID-19 goes beyond the death toll 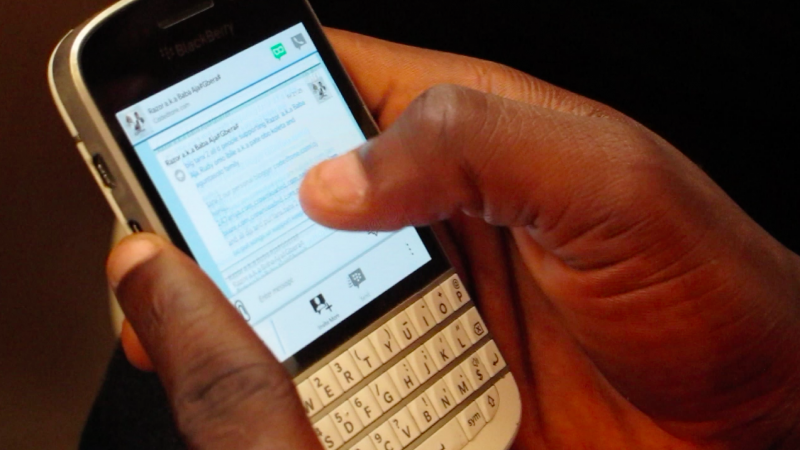 A person holds their phone during a research session in Lagos, Nigeria, September 2016. Photo by ARipstra (WMF) via Wikimedia Commons, CC BY-SA 4.0.

During the COVID-19 pandemic, governments took extraordinary measures to leverage technology to fight the virus. In addition to lockdowns, many African countries, including Nigeria, followed a global trend to use contact-tracing measures to track those who come into contact with an infected person.

On the surface, the proliferation of contact-tracing apps — both public and private —  appear harmless and noble. But Nigeria's history of surveillance raises serious questions about how the state may further its capabilities to track and target citizens during the pandemic using such technologies.

READ MORE: Nigeria's digital ID scheme may benefit those ‘with access'— but what about everyone else?

In June 2020, the Nigerian National Petroleum Corporation (NNPC) developed a contact-tracing application for immediate deployment across all NNPC locations in Nigeria.

Two other applications, Stay-Safe.NG and Rapid Trace were developed by private actors. Global Voices was not able to acquire any up-to-date data on the efficacy of these apps, nor how data is collected or stored.

To understand why digital rights activists are so concerned about the latest contact-tracing applications, however, it is important to highlight Nigeria’s historical context when it comes to surveillance.

A history of surveillance

The Nigerian government has never openly admitted its surveillance capabilities, but in August 2019, they passed and signed the Federal Mutual Assistance in Criminal Matters Bill into law, allowing the government to carry out surveillance activities on citizens on behalf of foreign nations if conducting criminal investigations.

A Paradigm Initiative report on digital rights and privacy in Nigeria details how the Nigerian government budgeted huge sums of money for surveillance activities consistently from 2013 to date.

A weak system of accountability to monitor how security and law enforcement forces use this technology allows for frequent abuses of power.

A 2015 investigation by the Premium Times uncovered how some Nigerian governors procured cutting-edge spying devices supposedly to fight crime but were using these technologies to play the role of “Big Brother” over residents of their respective states, especially politically active opponents.

In December 2016, former Governor Ayodele Fayose of Ekiti State accused the State Security Service of bugging his phone and leaking a private conversation with his colleague. He further accused them of recording telephone conversations of Nigerians perceived as critics of President Muhammadu Buhari and his All Progressives Congress government.

In 2018, allegations of mass surveillance of mobile phones in Abuja, the nation’s capital, appeared in several news reports. Suspicions that the government indeed has the capability to implement these tactics heightened following the inclusion of surveillance equipment into budgetary allocations.

In October 2019, the Committee to Protect Journalists (CPJ) reported that the Nigerian military is using surveillance technologies to spy on ordinary Nigerians and the press. According to the report, the Nigerian military procured a forensic technology designed to extract information from phones and computers. The report also mentions that the Nigerian government has spent at least 127 billion naira ($322 million USD) on surveillance and security equipment.

In addition to the measures highlighted earlier, the Nigeria Governors’ Forum collaborated with MTN, a leading Nigeria’s telecommunications companies, “to mitigate the effect of the COVID-19 pandemic by mining its users’ data … to profile states’ vulnerability to the spread of the coronavirus.”

Lack of political will

Despite increasing surveillance capabilities, Nigeria does not have a comprehensive data protection and privacy law — nor the political will to have one anytime soon.

A digital rights and freedom bill that aims to guarantee human rights on- and offline and provides safeguards against abuse with opportunities for redress was passed by the 8th National Assembly — but President Buhari did not sign it.

Lawmakers expect to pass the bill in  the 9th National Assembly (2019-2023), but there are justifiable fears that Buhari may reject it again, given the fate of the previous effort. The digital rights and freedom bill also seeks to ensure the right to privacy online and to equip the judiciary with the necessary framework to protect human rights online.

The Nigerian Information Technology Development (NITDA) released a data protection regulation in January 2019, with no clear indication of its enforceability. The agency has released three implementation frameworks for the same regulation since its release.

The weak regulatory framework around privacy protection is the loophole the Nigerian government has consistently exploited to violate the privacy rights of Nigerian citizens, civil society and the media.

In a United Nations Human Rights Council Resolution A/HRC/RES/34/7 on the right to privacy in the digital age, adopted in March 2017, the council called on all states “to review their procedures, practices, and legislation regarding the surveillance of communications…” in order to uphold privacy rights protected under international law.

The development of contact tracing-apps and other measures such as collaborations with telecoms companies raise a valid concern around enabling the government to leverage this for future clampdowns on citizens’ digital rights — long after the pandemic is long gone.

COVID-19 collateral — beyond the death toll

Nigeria’s enforcement of COVID-19 restrictions was marked by deadly repression and other violations of human rights. By the second week of the lockdown, Nigerian security forces had killed more Nigerians than COVID-19 according to a BBC report.

In other reported incidents, Nigerian journalist Kufre Carter was detained for one month on the allegation of defamation and conspiracy for being critical of southern Akwa Ibom state’s handling of the COVID-19 crisis.

When mass protests against police brutality coincided with the pandemic in October 2020, targeted surveillance extended to members of the decentralized social movement known as #EndSARS, a call to disband the notoriously violent Special Anti-Robbery Squad (SARS).

The government officially denied placing outspoken #EndSARS activists on a no-fly list, but others confirmed the government’s role in targeting protesters using surveillance tactics such as tracing protesters through their phone contacts. Activist Eromosele Adene faces an ongoing trial after being tracked, arrested, and charged for his involvement in the protests.

A national Human Rights Commission report on human rights violations during the COVID-19 lockdown shows that a total of 105 complaints were received from 24 Nigerian states including the federal capital. The report documented 14 violations of the right to freedom of movement, unlawful arrest, and detention, 11 incidents of seizure and confiscation of properties, 19 incidents of extortion, and more.

The real effect of the COVID-19 pandemic goes beyond the death toll. Under its guise, the government has been emboldened and empowered to strengthen its surveillance activities. Activists, media and critical voices have become even more vulnerable to targeted attacks from authorities. The real losses can only be counted post-pandemic, when glaring implications can be measured.

Will Nigeria ever enact the legislation necessary to mitigate against the threat of a full-on surveillance state?