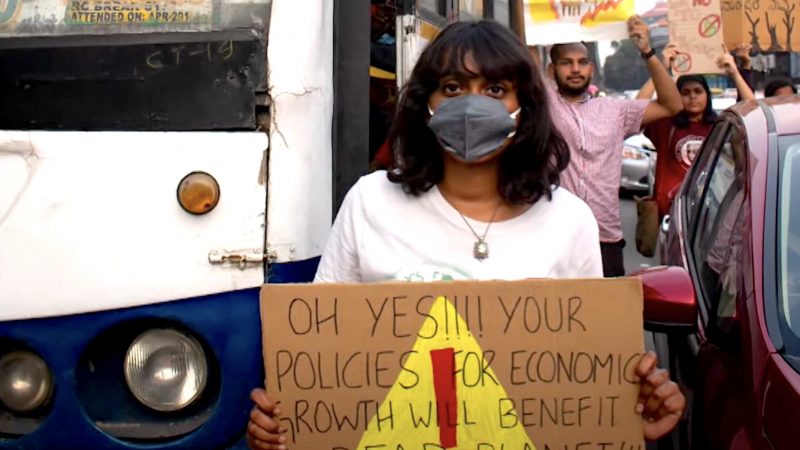 Disha Ravi in a protest. Screenshot from YouTube Video by Mojo Story.

The arrest of 22-year-old Indian climate activist Disha Ravi in Delhi over her alleged involvement with a “protest toolkit” has drawn widespread criticism in India and worldwide.

A student in Mount Carmel College in Bengaluru, Ravi is the founder of the Indian branch of Fridays For Future, a climate movement started by Swedish activist Greta Thunberg.

Ravi was arrested on February 13 in connection with a viral online document that lists resources for activists and sympathizers looking to support the months-long farmers’ protests in India. The activist was charged with sedition and criminal conspiracy and was remanded to five-day custody.

Hundreds of thousands of Indian farmers have been protesting against liberalizing agriculture reforms since October 2020, and authorities have cracked down on many perceived to support them. Dozens have been arrested, some of them charged with sedition — including journalists. Earlier this month, Twitter temporarily blocked over 250 accounts that allegedly expressed support to the farmers under a government request.

On February 4, Thunberg, along with other international personalities, tweeted in support of the Indian farmers. Later, the Swedish activist also shared the so-called “protest toolkit” (her original tweet has since been deleted).

The anonymous toolkit is an open text file with information about the protests and tips for organizing or supporting the farmers’ movement. The document briefly explains what the protests are about, lists relevant hashtags and the Twitter handles of Indian politicians, and provides links for petitions. The document's text has no calls for violent action.

Following Thunberg's tweet, Delhi police filed a First Information Report to investigate the document. The next day, crowds in Delhi held banners against an “international interference,” and photos of Thunberg and popstar Rihanna, who had also tweeted about the farmers’ protests, were set alight.

This week, police alleged that Ravi was one of the authors of the document, that the young activist had set up a WhatsApp group for others to collaborate on the text, and that she was the one who shared it with Thunberg. On Wednesday, in court, Ravi denied all accusations but admitted she had edited two lines of text on the document.

A joint statement by over 50 academics, artists and activists have called Ravi's arrest “disturbing,” “illegal in nature” and an “over-reaction of the state.” The #IndiabeingSilenced hashtag has trended on Twitter since the weekend.

Many have taken to social media to criticize the police, such as Siddharth Varadarajan, an editor at The Wire:

The @DelhiPolice chief should hang his head in shame for #DishaRavi‘s arrest, as should @DrSJaishankar & colleagues for contributing to hysteria over the toolkit. If these clever men see sedition in it, they aren't fit to hold public office in a democracy. https://t.co/507BEtzXpt

Editing a google doc in support of farmers is an act of sedition in this country now. #LongLiveDemocracy #DishaRavi

disha ravi, a 21-year-old climate activist, has been arrested by delhi police for sharing a toolkit @GretaThunberg posted in support of the #farmersprotest.

disha’s arrest is alarming and the world needs to pay attention. #freedisharavihttps://t.co/IYGsLpNjwZ

Opposition politicians have also voiced concern, such as Chief Minister of Delhi and national convener of the Aam Aadmi Party, Arvind Kejriwal:

Arrest of 21 yr old Disha Ravi is an unprecedented attack on Democracy. Supporting our farmers is not a crime.

Several pro-government politicians praised the police's action. The BJP MP and Home Minister of Haryana Anil Vij tweeted that “seeds of anti-nationalism… should be destroyed… whether Disha Ravi or anyone else.” Twitter deleted and then restored the tweet after concluding it didn't breach its rules on extreme speech.

Meanwhile, a non-bailable warrant has been issued on February 15 against activist-lawyer Nikita Jacob also alleging her involvement in the creation and sharing of the “toolkit”. 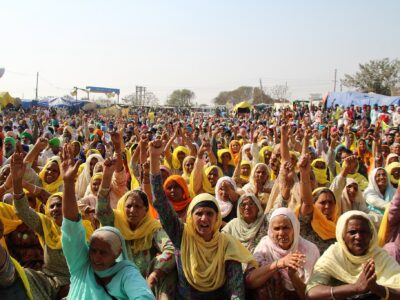