The toll gate was central to last years' #EndSARS protests

Nigerian police today arrested several people who were protesting the reopening of the Lekki toll gate in Lagos, Nigeria—the center of #EndSARS protests last October—Channels TV reported on their website.

Some of the protesters, allegedly detained Saturday, February 13, 2021, at the Adeniji-Adele Police Station, in the commercial city of Lagos, were said to be “beaten and tortured”:

Meanwhile, there are moves to secure the release of those arrested:

UPDATE: Our lawyers are at Adeniji Police Station but are denied access. They are told they can’t see anyone arrested till the Area commander comes.

We presently have 19 names on our list of persons detained from the arrests at #Lekkitollgate https://t.co/q1ymJvSwT3

One of the arrested protesters is popular Nigerian comedian Mr. Macaroni (Debo Adebayo).

Another protester, who came to “observe” the protests, was also arrested:

The Nigerian police had a day earlier, February 12, 2021, been deployed in their numbers across Lagos, with the clear intent of intimidating protesters who were planning to congregate at the toll gate:

The #OccupyLekkiTollgate protesters had been threatened by another group #DefendLagos “to stay away” from the toll gate, reported the Premium Times, a Nigerian online investigative newspaper.

Lekki toll gate is a ‘monument to memory’ 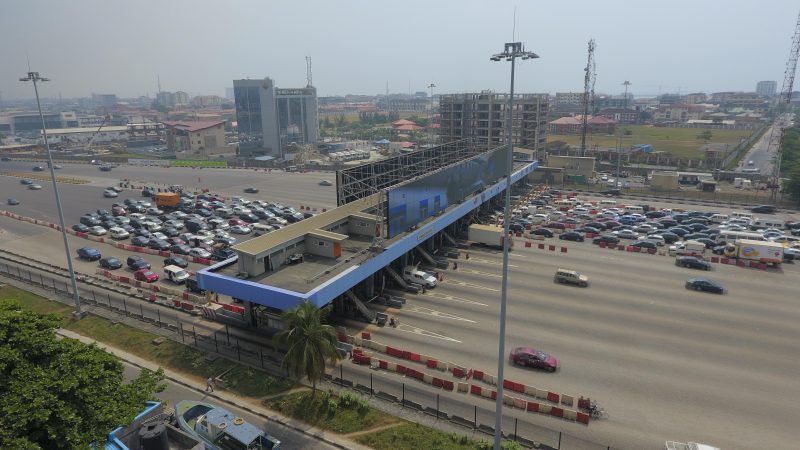 Nigeria witnessed the #EndSARS protests for over two weeks (October 9-20, 2020) in at least 12 of the country’s 36 states and in many Nigerian diaspora communities. During the protests young Nigerians called out the intimidation, arrest and torture inflicted on them by the Special Anti-Robbery Squad (SARS), a specialized unit of the Nigerian police.

On October 20, 2020, Nigerian security officials opened fire on protesters in Lekki, Lagos. Amnesty International stated that “the Nigerian army and police killed at least 12 peaceful protesters” in both Lekki and Alausa, Lagos sites of the #EndSARS protests. 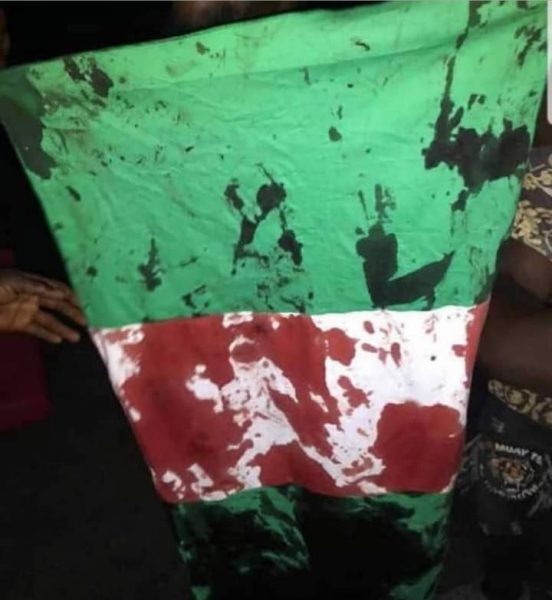 A bloodied Nigerian flag after a protester is shot on the night of the Lekki Toll Gate Massacre. Image released by Shadow Scribes Wikimedia Commons, October 21, 2020 (CC BY-SA 4.0)

Government and security officials denied the killings despite evidence by journalists and human rights groups to the contrary.

READ MORE: Bullets, blood and death: The untold story of what happened at Lekki Toll Gate in Nigeria (Part I & Part II)

A judicial panel of inquiry was instituted by the Lagos State Government on October 19, 2020, while the #EndSARS protests raged, to investigate cases of police brutality.

Today’s protest is a fallout from the February 6, 2021 decision by the Lagos panel that ordered the reopening of the Lekki toll gate.

This did not go down well with some Nigerians:

#OccupyLekkiTollGate The Nigerian Government thinks they are smart. They want to reopen Lekki Tollgate but cant fish out those responsible for the killings of the protesters at Lekki Tollgate. If one of their loved ones was massacred, it wont take them secs to track the culprits. pic.twitter.com/BQccO97AaN

Many viewed the reopening as an insensitive affront on the memory of victims of the Lekki shootings:

“@Austynzogs: @Gidi_Traffic May the blood of all victims of #LekkiMassacre haunt those who want to reopen the toll plaza for profit making.
Say Amen! pic.twitter.com/c51uBgPcYN

On February 12, 2021, Rinuola [Rinu] Oduala, #EndSARS activist and member of the Lagos Judicial Panel of Inquiry resigned, following the panel’s decision to reopen the toll gate:

I will be stepping down from the Lagos Judicial Panel as it is now obvious that the government is only out to use us for performative actions.

In a series of tweets, Rinu stated that her resignation was because the Lagos State government and the operators of the Lekki toll gate “have not been cleared of collusion with elements allegedly deployed by the federal govt to target citizens on home soil during a time of peace, without provocation.”

Hence, her “stepping down from the Lagos Judicial Panel” was due to the insincerity of the government. Rinu stated that she will neither be a party to “hand wringing and lies” nor be “manipulated into gaslighting the people and attaching my name to a rubber-stamped and foregone conclusion.”

Nonetheless, no matter how this protest pans out, the Lekki toll gate has now morphed into “a monument to memory” according to Nigerian writer and culture critique, Molara Wood:

No matter what they do, no matter the security clampdown, #LekkiTollgate is now a site of protest. Once given to relentless ticketing for billions of naira, now made unpeaceable by struggle. A monument to memory. Watch as meaning is being made. The Tollgate belongs to the people.