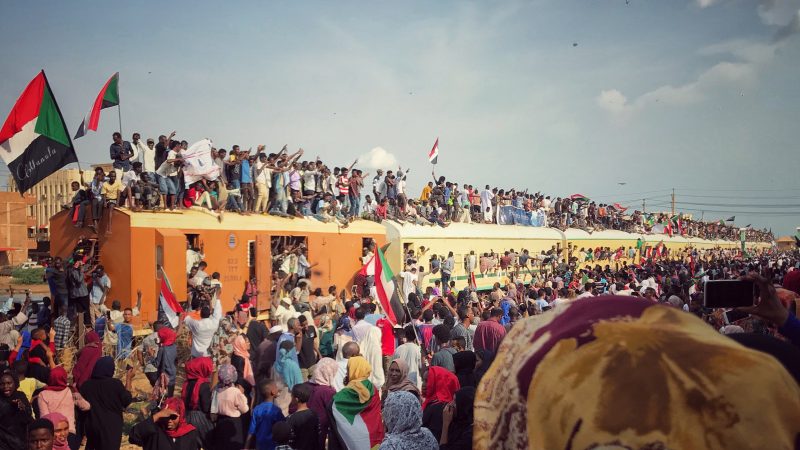 Protesters gather inside and on top of a train in Sudan during the revolution, August 17, 2019. Photo by Manula Amin, CC BY-SA 4.0 via Wikimedia Commons.

The lawsuit has sparked controversy over the nature of Sudan’s current cybercrime law, and the potential to abuse the law to limit freedom of expression.

Alsadig is under investigation for a solidarity speech he made on behalf of his colleague, Salah Manna, on February 6.

That day, Manna had been arrested and taken to the office of the specialized prosecution of the crimes against the state for “stirring hatred against security forces, disrepute and offense and insult,” after Manna allegedly accused Burhan of using the council’s powers to release former dictator Omar al-Bashir’s wife from prison.

Manna and Alsadig are both members of the Empowerment Removal Committee, a legal team tasked with dismantling Bashir’s administration. Alsadig made his controversial speech among supporters as Manna was being released from the investigation.

Alsadig's speech circulated widely on social media. He was later charged with publishing lies or and fake news and committing insults of disrepute under Articles 24, 25, and 26 of the 2020 cybercrime law, known in Arabic as قانون مكافحة جرائم المعلوماتية or “the law to combat information crimes.”

“I was interrogated about the authenticity of the posted clip, and whether I captured or published it, the content of the conversation in it and the indications of some of the phrases that I mentioned.

Alsadig adamantly denies any wrongdoing in the complaints lodged against him.

The 2020 cybercrime law amends the 2018 law legislated during Bashir’s rule, but does not change much except an increase in the penalty period.

Surprisingly, the Ministry of Justice never published the 2018 law in its official gazette, which is inconsistent with legal norms.

This law was designed by the deposed dictatorial regime to limit the freedom of activists, bloggers, and media professionals, as well as other laws such as the press and publications law. It is certainly a cause for authoritarianism and can be used in a bad way that limits freedom of expression.

How can Sudan hold citizens accountable for the law when they lack access to the text of these laws?

After Sudan's revolution in 2019, the country entered a transitional period during which lawmakers legislate without a parliament or representation. Instead, they carry out legislation behind closed doors without consultation with representatives. Until a formal parliament is created, the joint meeting of the Sovereign Council and cabinet hold the power to legislate.

Now, workshops are being held under the auspices of the European Union to amend the 2020 cybercrime law. According to a leaked copy of the 2018 law, some articles have led to confusion, particularly Article 5-3:

Terms such as “national security” and “sensitive information” lack definition.

This enables government institutions to violate fundamental freedoms. Moreover, the law does not specify which institutions can interpret these categories.

Article 7 criminalizes network shutdown if a citizen is responsible but does not mention what happens if the government cuts off network access — which has already happened three times in 2019 and 2020.

Read more: Internet shutdowns in Sudan: The story behind the numbers and statistics

Anyone who uses a telecom or information network or an application or any other communication tool to publish rumors or news or a report and he/she knows it's fake aiming to spread the fear to the people or threatening the public peace or decreasing the prestige of the state will be punished for one year or fine or both of them.

Again, the law lacks critical definitions of terms such as “the prestige of the state” and which institutions would arbitrate.

Article 23 criminalizes the violation of one’s privacy if committed by a citizen, according to the 2018 law, but not if the violation of privacy occurs as a result of a judiciary or prosecutorial or other “designated authority.”

Once again, the law does not provide any clarity about what defines the “designated authority” to violate a citizen’s privacy.  The state may therefore activate this article to violate the privacy of opposition and activist voices.

In fact, the right to violate privacy gets reinforced in Sudan’s national security law amendments of 2020, Article 25, which states:

The security service has the right to request information, data, documents or things from anyone to check it or take it.

Security services can lawfully violate a citizen’s privacy without asking for any permission.

Alsadig’s case is not the first time the government has activated these laws against the opposition and the activists. The military has also abused these laws to threaten the journalists and activists.

If [this lawsuit] was intended to preserve the prestige of the sovereign institution, then it achieved the opposite of its purposes and diminished its prestige, but made it a cause for jokes and ridicule.

Sudan is in a dire need of reforming its cybercrime law.

According to a Freedom House report, Sudan's score on civil liberties is 10 out of 60 in 2020.

Ahmed Elsanousi, a lawyer who specializes in criminal code and administrative law, told Global Voices that Burhan surely has the right to register a lawsuit.

“This is remarkable progress in a post-dictatorship Sudan,” he said.

However, the law itself “contains vague and unclear terms” and is therefore easily exploitable. He also mentioned that the revised cybercrime law does not yet represent citizens because it is essentially an old law enacted under the former regime.

It has become imperative to enact a law that keeps pace with technological development, taking into account the legislation of appropriate penalties. There is a penalty of imprisonment for a person of 20 years, and I think it is a very severe punishment, and I believe that it is intended to intimidate activists from investigating the facts, writing opinions and publishing against the government. This can be seen in that most of the legal cases directed according to this law are directed against activists and politicians.

While Alsadig remains under investigation for his impassioned speech, he is calling for urgent reform to the cybercrime law in Sudan:

Sudan needs laws that control media work and combat publishing that incites hate speech because the community bullion is torn apart and distorted by the ethnic, religious, and gender polarization that we inherited from the deposed government and its regime.

It is imperative to reform all laws and legislations in line with the international bill that guarantees freedom of expression. The blame does not fall on Burhan as much as it is on his legal adviser, who did not see the legacy of the sovereignty where it did not sue or try someone who criticized it for disagreeing with it.