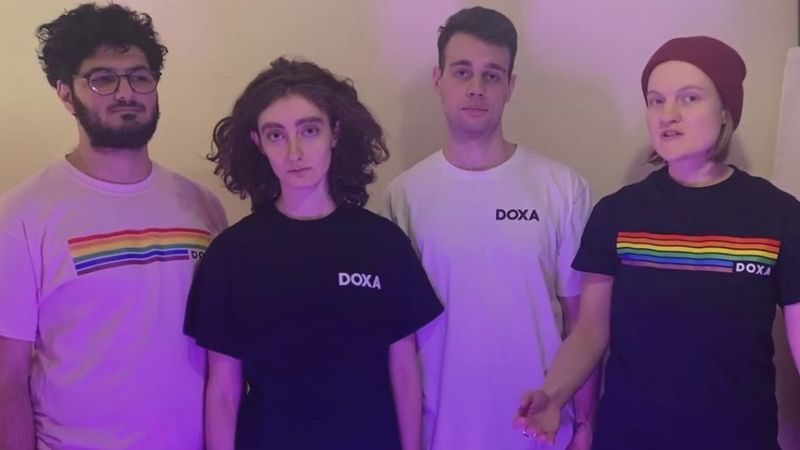 On April 14, Russian law enforcement officers searched the Moscow office of independent student journal DOXA. According to the outlet, four of its editors also had their apartments searched and were later charged with inciting minors to participate in illegal protest rallies.

During the January 23 protest in Moscow in support of opposition leader Alexey Navalny, DOXA published a video explaining to students they shouldn't be afraid to voice their opinions at the protest rallies and that universities had no legal basis to expel students who attend. Russian internet censor Roskomnadzor demanded the video be taken down, and DOXA complied with the request, though disputed the video violated the law.

“Today at 6 a.m. [law enforcement officers] carried out searches at the DOXA office and the homes of editors Armen Aramyan, Vladimir Metelkin, Alla Gutnikova and Natasha Tyshkevich,” the outlet said on its website on April 14.

The four editors, all students or alumni of the Higher School of Economics, were then taken in for questioning by the Russian Investigative Committee, and charged with inciting minors to ‘illegal activities’ under Article 151.2 part 2 of the Criminal Code. The charges could see the young journalists face up to three years in prison. For the next two months, a district court in Moscow has barred them from phone and internet access and from leaving their homes, essentially placing them under house arrest. All four were also fitted with electronic GPS ankle trackers.

During this year's protests across Russia, DOXA has chronicled state pressure on student participants and provided advice on students’ civil rights when facing pressure from their universities and colleges.

During the afternoon court hearing on Wednesday, April 14, dozens of fellow students and supporters gathered near the Basmanny court in Moscow in a show of solidarity with the four journalists.

Over 1,600 Russian students, researchers, and HSE alumni have addressed the university's leadership in an open letter expressing solidarity and calling on them to publicly support their students:

The police pressure directed at educational institutions and the student community is becoming a regular occurrence – and a cause for concern. The university, as a space for critical thinking, cannot stand aside while its students and alumni are being persecuted under explicitly fabricated charges aimed at intimidating, instilling fear, and destroying student solidarity.

Over 900 academics from around the world, including high-profile scholars such as Judith Butler, Jodi Dean, and Slavoj Žižek, have signed a statement of solidarity with the DOXA editors calling the charges against them “preposterous” and demanding “all charges to be dropped” and that “all harassment of students immediately cease.”

#Russian authorities should immediately drop all the charges against the DOXA editors, return their equipment, and let them do their jobs covering important political events in the country without fear. @doxa_journal @aramyannn https://t.co/TeaHuFu950

Despite the pending charges for its editors, DOXA said in a statement on its website that it will “continue to cover things that are important for young people” and “to stand up for their rights.” In a summary post on their Telegram channel, DOXA also quoted the words of one of the editors, Alla Gutnikova, from the very video the outlet was asked to take down earlier this year:

Throughout history, young people and students have always stood up for their rights and freedoms. This was true 50 years ago, and 100 years ago. The authorities have declared a war on youth, but we are the youth, and we will surely win.