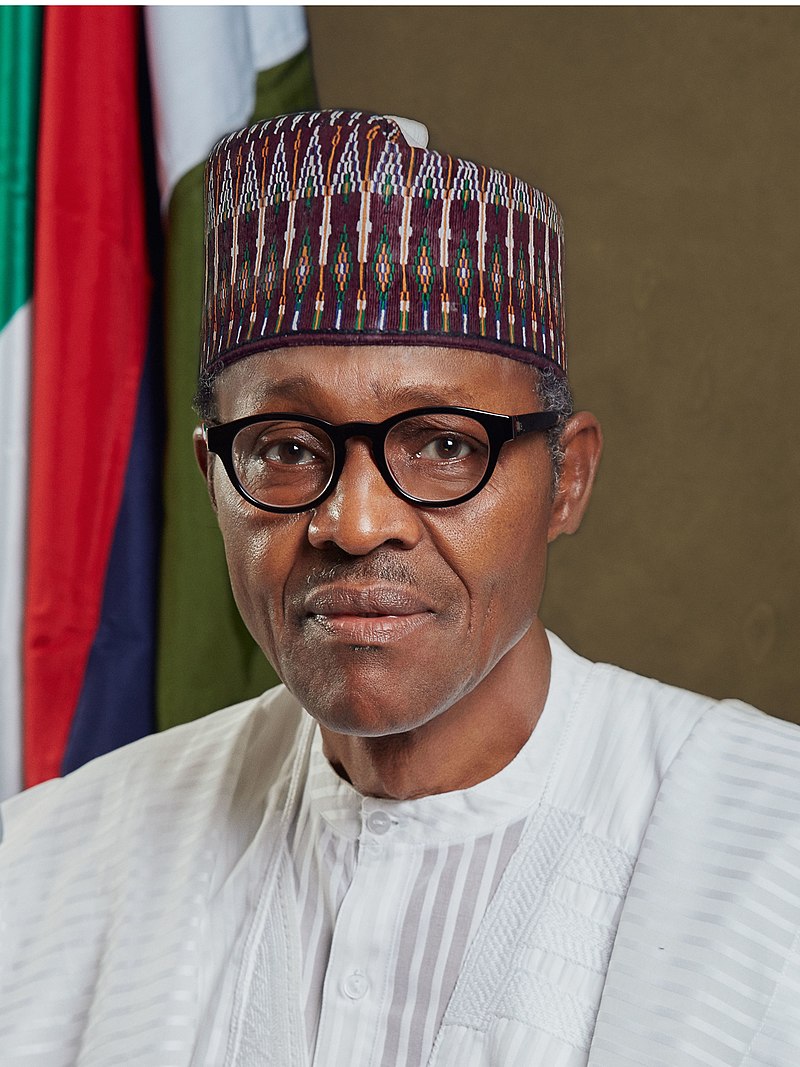 The Official Portrait of the President of the Federal Republic of Nigeria, President Muhammadu Buhari taken by Bayo Omoboriowo via Wikimedia Commons, 29 May 2015, (CC BY-SA 4.0).

The Nigerian government announced Friday it was suspending Twitter in the country, just days after Twitter deleted a harmful tweet by Nigerian President Muhammadu Buhari that suggested the state would use violence against the Igbo ethnic group.

Despite removing the tweet, the message continues to circulate on social media, bringing up painful memories of a civil war that left more than one million dead. But the tweet also sparked a movement on social media in support of Nigerians from the Igbo ethnic group.

In a series of tweets posted on June 1, 2021, Buhari threatened to “treat” Nigerians from the eastern part of the country “in the language they understand,” in a reference to Nigeria’s 1967-1970 civil war against the secessionist Republic of Biafra, in southeastern Nigeria.

The tweets came after a series of attacks on government and security installations in the region, which have been blamed on an armed group linked to the Indigenous People of Biafra (IPOB), a pro-Biafra secessionist movement. IPOB denied involvement in the attack, says the Voice of America.

“Many of those misbehaving today are too young to be aware of the destruction and loss of lives that occurred during the Nigerian Civil War,” Buhari’s now-deleted tweet said: 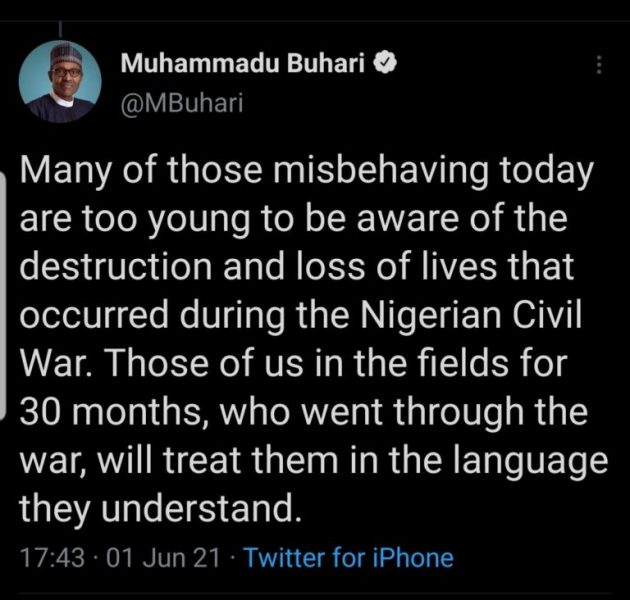 Screenshot of the offensive tweet by Nigeria's President Buhari

The tweets reiterated comments made by a visibly irritated Buhari in the State House, Nigeria’s capital Abuja, about the wave of arson attacks on electoral officers. “I think we have given them enough latitude. They have made their case, they just wanted to destroy the country,” he said, appearing to reference secessionist agitators:

Buhari made the statement himself. pic.twitter.com/CCX4d78SLk

Buhari, a retired general, served in the army during Nigeria’s civil war.

The brutal civil war led to the death of “over one million ethnic Igbos and other Easterners,” according to Chima J. Korieh, a professor of African History at United State’s Marquette University. “For most Nigerians, the war over the breakaway state of Biafra is generally regarded as an unfortunate episode best forgotten, but for the Igbo people who fought for secession, it remains a life-defining event,” asserts Nigerian writer Adaobi Tricia Nwaubani. (Disclosure: The author is from the Igbo ethnic group.)

Twitter policy on hateful conduct prohibits tweets that “promote violence or threaten” people based on “race, ethnicity, national origin.” Such tweets, like Buhari’s, are either deleted by the tech company or the user is compelled to “remove the violating content.”

Lai Mohammed, Nigeria’s minister of information, described the removal of the president's tweet by the social media company as “very suspect”:

An investigation by the social media forensic expert Digital Africa Research Lab (DigiAfricaLab) reveals that Buhari’s abusive tweet is still visible “across numerous timelines” two days after it was deleted by Twitter, “due to Quote Tweets”:

Over 30 hours after Twitter deleted a Tweet by Nigerian president @MBuhari for violating its rules, the deleted Tweet REMAINS VISIBLE across numerous timelines due to Quote Tweets!

[DigiAfricaLab made this observation whilst signed in to different accounts on different devices] pic.twitter.com/KwUIVmzEoP

Signing onto “different accounts” through “different devices,” DigiAfricaLab was still able to view the more than 17,000 quoted tweets made by users before the social media company pulled down the offensive tweets from the “timelines of @MBuhari and @NGRPresident,” both verified Twitter handles of President Buhari. Furthermore, DigiAfricaLab was able to click and expand President Buhari’s deleted tweet.

Deleted tweets may still be visible to Twitter users because Twitter's software, also called, Application Programming Interface (API) relies on third-party applications that connect to “Twitter servers via a URL.”

Another reason, according to J. D. Biersdorfer of New York Times, was that deleted tweets “may still be cached away and therefore available to show up in search results — until the site goes indexing again and updates itself with a fresh copy of your Twitter profile and posts.”

Screen shot of the context of mentions of the #IAmIgboToo hashtag

Human rights activist Aisha Yesufu — adopting the Igbo name “Somtochukwu,” meaning “join me in praising God” — while condemning “the 1967 [civil war] threats from President Buhari to the Igbo people” said that “an attack to Igbo people is an attack on me”:

Nigerian hip-hop recording artist and record producer Jude Abaga (M.I Abaga) expressed his desire for the country to move beyond these hateful statements:

Today let us stand with our Igbo family and say #IAmIgboToo #Ozoemena ♥?? pic.twitter.com/B0xGAjnfMG

I remember the Aba Women Rebellion where at least 25,000 Igbo women protested against colonial oppression.

I come from the same land with those dynamic women, born of confidence & resilience to years of oppression & social injustice.

“The use of dehumanization makes it easier to remove the moral concern associated with killing, discriminating, or torturing others based on their group identity. If they aren’t seen as human, it is easier to justify acts of violence against them.” https://t.co/nW2OPFBqbM

Dehumanization, according to Ozurumba, “makes it easier to remove the moral concern associated with killing, discriminating, or torturing others based on their group identity.”