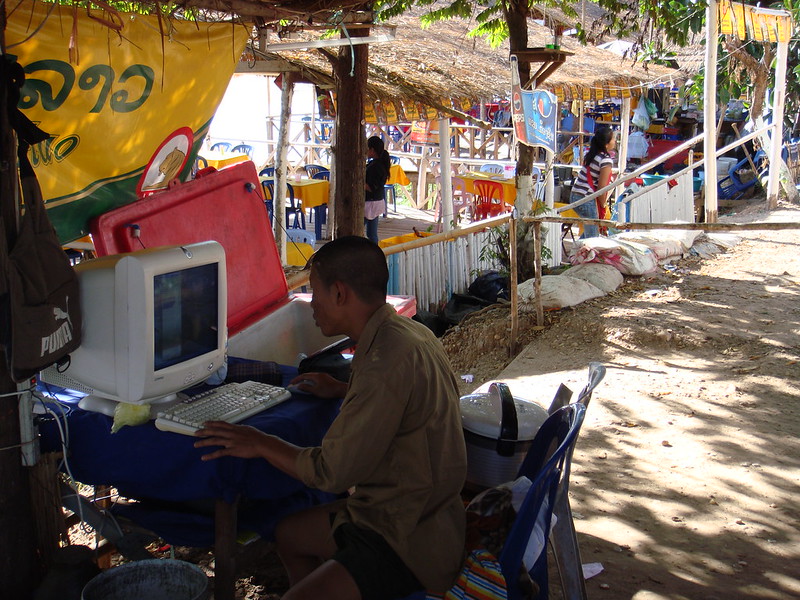 A computer user in Laos. Flickr photo by jonrawlinson. (CC BY 2.0)

On May 20, the Ministry of Information, Culture and Tourism issued a vaguely worded order requiring all provincial governments to keep records about information published on social media platforms, websites, online news sources and Facebook pages.  The following day, the Ministry of Public Security announced that it has created a special task force to monitor “illegal online media” and COVID-19 related “fake news” content.

Both ministries said these actions are intended to prevent the spread of misinformation during the pandemic.

A local official told the news outlet Radio Free Asia that the government is targeting those who “misuse social media.”

Our job is to give advice and to lay out the rules and punishments for those who misuse social media. We’ll give a warning to first-time offenders, and then fine people for a second offence. For a third offence, we will put them in jail.

The Laos government has been intensifying control over the internet. In October 2020, it ordered social media platform operators to register with the Mass Media Department of the Ministry of Information, Culture and Tourism. The directive even included individual internet users:

Any individual, legal entity, state or private sector that continues to publish and provide information to the public via social media without permission will face measures in line with the laws of the Lao PDR.

Laos president Thongloun Sisoulith, who was elected in March 2021, has warned social media users not to destabilize the nation:

In the era of the advanced technological and modern social media, police must fight firmly and immediately against people who use social media to commit crimes, to destroy our country and to cause any disorder by undermining our unity, creating misunderstanding and creating any antagonistic parties in the country.

The reinforcement of social media platforms’ registration and severe control of online information are another reflection of the digital dictatorship in Laos, which violates the digital rights of individuals, especially freedom of the press, freedom to access information, and freedom of expression.

They cited the case of environment activist Houayheuang Xayabouly, also known as Muay, who has been in detention since 2019 for posting a video to Facebook, in which she criticizes the Laos government’s response to a flooding disaster. Aside from Muay, there have also been several Facebook users who have been charged for commenting on corruption or abuse of power by local officials.

The groups warned that instead of tackling COVID-19 disinformation, the internet task force could be deployed to stifle free speech.

Dhevy Sivaprakasam, Asia-Pacific policy counsel of Access Now, noted that security forces will be part of the task force in charge of monitoring social media.

The fact that it will be staffed by the police and state representatives — without independent fact-checkers, civil society, or other concerned non-state stakeholders — magnifies the looming risk of attacks and harassment against individuals who should not be seen as criminals at all.

The new directives were passed after Laos Twitter users started to use the hashtag #ຖ້າການເມອືງລາວດີ (#IfLaoPoliticsAreGood) to comment on political issues. At this time Lao citizens were also expressing solidarity with Thai democracy protesters. Sebastian Strangio, Southeast Asia editor of The Diplomat news website, wrote that the task force could be aimed at suppressing the rise of an online opposition movement:

The new task force is an expression of the ruling LPRP’s concern that Facebook could act as an incubator of anti-government and anti-party dissent.

India  6 days ago
Cancel this reply