'There is no choice for us but to press on' 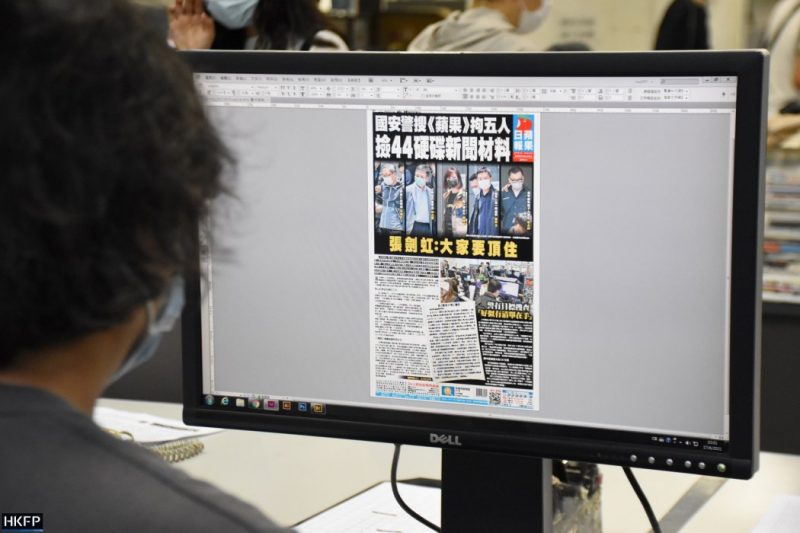 The following post is a round-up of reports written by Kelly Ho and Candice Chau which were published in the Hong Kong Free Press on June 17 and 18, 2021. It has been published on Global Voices under a content partnership agreement.

The Hong Kong pro-democracy tabloid Apple Daily has continued its operations and printed 500,000 copies on June 18 after Hong Kong police raided its headquarter and arrested five senior executives on suspicions of “conspiracy to collude with foreign forces”.

Forty-four computer hard drives with journalistic materials were seized during the raid and the media outlet's assets totalling 18 million HK dollars (approximately 2.32 million US dollars) have been frozen.

The alleged offence involved around 30 Chinese and English-language Apple Daily articles published since 2019 calling for sanctions against China or Hong Kong.

In a June 17 press conference, Hong Kong’s security chief John Lee accused Apple Daily of using journalism as a tool to endanger national security and warned fellow journalists to shun the five arrested executives or they could pay a “hefty price”

But the newspapers’ reporters and staff insisted on carrying out their mission. More than 500,000 copies of Apple Daily News were printed and delivered to news stalls the next day.

The police formally charged Cheung Kim-hung and Ryan Law with conspiracy to collude with external elements on June 18, and the pair will stand trial in court on June 19. The other three are still being detained.

The suspects have been arrested on strong evidence that they're conspiring to endanger national security.

[…]anyone or any company attempting to use journalistic work as a protective umbrella or cover to commit crimes endangering national security, the SAR government will use the most stringent measure to combat [them] in accordance with the law. […] Ordinary journalists are different, and should not get involved with them, keep a distance from them.

Lee, however, refused to answer questions on whether the continuation of Apple Daily’s operations would violate the law, the nature of the articles, or whether citizens could legally share the articles, buy the paper or purchase shares in the organisation.

Apple Daily was raided by the Hong Kong police for the first time in August 2020 after its founder, Jimmy Lai, was arrested on charges of fraud over a commercial dispute with a tenant. A few months later in December 2020, the national security police pressed an additional charge of “colluding with foreign governments” under Hong Kong's National Security Law. Currently, the 73 year old media tycoon is serving 20 months in prison for protest-related offences.

The paper's associate publisher Chan Pui-man explained in an interview before her arrest that the staff has been striving to keep the paper running even though they anticipated its looming end due to governmental pressure:

#Interview｜Associate publisher Chan Pui-man before arrest: Whether Apple Daily would survive has been the elephant in the room for all staff…“But no, there is no choice for us but to press on till the end…There’s no choice.”https://t.co/hGY7k1QyP4#AppleDailyENG #HongKong

The newspaper's statement following the arrest of the five senior staff also vowed to hold fast to their duty until the end.

After the police raid, some Apple Daily journalists returned to their office and worked on their reports with personal computers or mobile devices. The final version of the paper was in print by 11:30 pm. Phoebe Kong, DW news correspondent, highlighted the front-page headline in a tweet:

The best way to defend #PressFreedom is to publish.
‘EVERYONE HAS TO HANG IN THERE’ – a quote from arrested CEO Cheung Kim-hung placed in the middle of today's @appledaily_hk front page. Am here to document the first batch of the critical paper in the wake of massive raids. #HK pic.twitter.com/Wwsux0RZcg

To express support for Apple Daily, pro-democracy Hongkongers rushed to buy the paper after midnight:

HKFP_Live: People are queuing up to buy pro-democracy tabloid Apple Daily following a police raid of its headquartershttps://t.co/FCC2KZrLCS pic.twitter.com/KFH25osWiq

Colombia  14 May 2022
END_OF_DOCUMENT_TOKEN_TO_BE_REPLACED
Cancel this reply