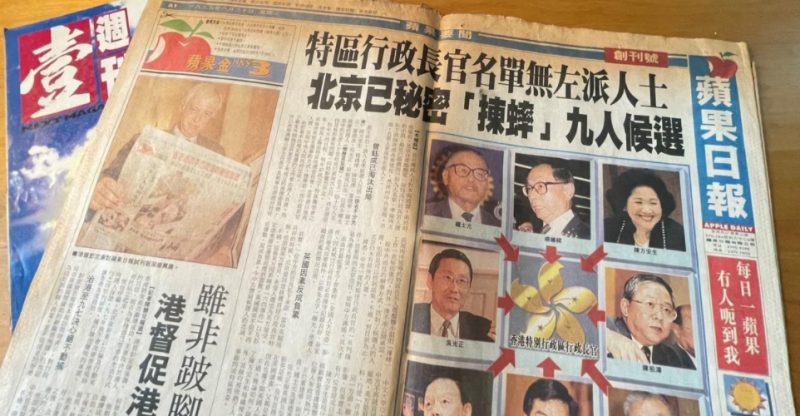 The 26-year-old pro-democracy news outlet Apple Daily announced it will cease publication of both its print [2] and digital editions this week. The print team will shutter its operations on June 23 and publish its last edition on June 24, while the digital team will cease operation by Saturday, June 26. The decision to shutter the print edition follows the arrest of its editorial opinion writer [3], Yang Qing Qi, by Hong Kong security police on June 23.

Earlier this week, board members from Next Digital, the news outlet’s parent company, stated that Apple Daily would be forced to shut down by June 25 unless the government agreed to unfreeze its assets to allow them to pay staff salaries and other operational costs.

The board meeting was called following the arrest of five Apple Daily executive staff [7] members on June 18. Next Digital’s CEO Cheung Kim-hung and Apple Daily Chief Editor Ryan Law were charged with conspiracy to collude with foreign forces in violation of the national security law.

The Security Bureau also froze 18 million HK dollars of the three companies’ assets — Apple Daily Limited, Apple Daily Printing Limited and AD Internet Limited — on the grounds that they were subject to a national security investigation.

Apple Daily's request that their assets be un-frozen was ignored. The city’s Chief Executive Carrie Lam defended the police's action and stated that freezing assets is an internationally accepted practice designed to prevent people from endangering national security:

HKFP_Live: Chief Exec. Carrie Lam refused to comment on the possible closure of Apple Daily. Referring to the security law, she said: “We will implement this law. This law will not exist in name only. The police would have collected sufficient evidence before taking action.” pic.twitter.com/AmUs7Ogs2T [8]

In the past few days, many staffers have resigned and a number of production teams, including those from the Video News, English News, Finance News and Twitter have ceased operation.

Editorial opinion writer Yang Qing Qi, whose arrest on June 23 was one of the catalysts for the shuttering of the outlet's print edition, wrote in his last editorial that intellectuals and media workers should not abandon their integrity at critical moments.

The security police warned that they would carry on their investigation and might arrest other staff members.

Why Apple Daily matters to Hongkongers

Apple Daily [10] was founded on June 20, 1995, by garment businessman Jimmy Lai, who had become a political activist after the Chinese government crackdown on the pro-democracy student movement in Beijing in 1989. It was the first paper to practice tabloid journalism in Hong Kong, and quickly became the most popular and influential newspaper in the city.

The Hong Kong “Apple Daily” was launched on June 20, 1995. The name was conceived by Jimmy Lai. He appeared in the first advertisement. After taking a bite of an apple, he said, “An apple a day, no one deceives me.” “Apple Daily” is scheduled to stay by this Friday at the latest pic.twitter.com/BG50bI4yjW [11]

Despite its tabloid-style approach, in its 26 years of operation, the paper continually lived up to its promise of being critical of the government authorities.

However, the media corporation withstood the political pressure, thanks to the support of subscriptions from half a million [13] pro-democracy Hongkongers.

As journalist Yuen Chan highlighted on Twitter, on July 1, 2020, the date the Beijing-imposed national security law was enacted in Hong Kong, all other newspapers ran a political advertisement welcoming the legislation on their front pages. But Apple Daily's front-page headline was “The enactment of draconian law signifies the end of Two Systems.”

In one picture: why the crushing of @appledaily_hk [14] in this way is a devastating blow.
Hong Kong front pages on 1 July 2020, after the implementation of the National Security Law. pic.twitter.com/ZlGecK6jif [15]

Beijing became determined to shut down the independent news outlet after the 2019 anti-China extradition protests. Activist tycoon Jimmy Lai was the primary target. With the national security enacted on July 1, Jimmy Lai was arrested on August 10 [17]for alleged collusion with foreign forces, and the headquarters of Apple Daily were raided for the first time.

Lai was released on bail but was arrested again on alleged fraud on December 3. A week later, on December 11, he was charged with conspiring and colluding with foreign forces [18] to endanger national security. He was granted bail for a week around Christmas but was denied by the Court of Final Appeal.

On April 16, Lai was sentenced to 14 months in prison for participating in an authorized assembly in August 2019, while awaiting the court hearing on foreign collusion charges, the maximum penalty for which would be life imprisonment.

Yet, Apple Daily continued to operate without Lai. On May 14, the police froze Lai’s assets, including his shares in Next Digital and all local bank accounts. On May 28, he was handed an additional 14 months in prison for taking part in another unauthorized assembly in October 2019.

Reports say that 5 directors of @appledaily_hk [14] are now being arrested by the #HK [19] police under the National Security Law #NSL [20]. The authorities are wiping out all dissenting voices in #HK [19], essentially so before July 1st, the 100th anniv of #CCP [21]. Blatant political persecution!!!!