Another Apple Daily writer was arrested under National Security Law 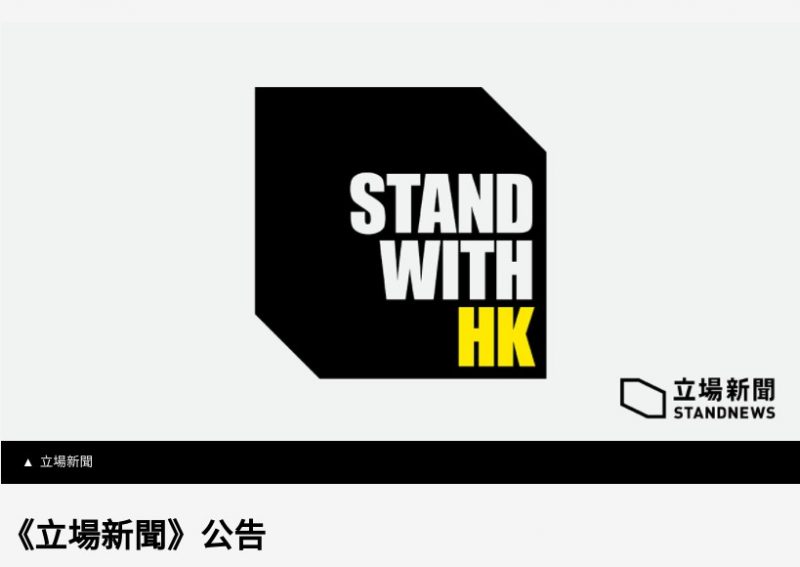 A screen capture from the Stand News.

The following post was written by Selina Cheng and published by Hong Kong Free Press on June 28, 2021. It is republished on Global Voices under a content partnership agreement.

Pro-democracy digital news outlet Stand News has announced it will remove opinion articles and columns it published before May and stop accepting donations in order to reduce its risks under the national security law. The announcement was made following reports of anonymous threats to some media outlets in Hong Kong.

The reader-funded Stand News stated on June 27 that it would remove all articles published by its regular contributors and columnists and other opinion articles published before May. The blog held scores of articles by news and political commentators in the city.

The developments came after the now-defunct Apple Daily newspaper and other independent news outlets in the city were reportedly sent anonymous messages containing threats and full lists of their full and part-time staff.

Authorities also froze 18 million HK dollars (2.3 million US dollars) in funds from the newspaper’s parent companies, making it impossible for them to pay staff wages.

Stand News, an independent online media outlet founded in 2014, has mainly focused on political and court news in the wake of the 2019 protests.

To avoid further financial losses should its accounts be frozen, the media outlet said it would stop accepting new donations and suspend payments from regular donors. The company said it has enough resources to operate for the next 9–12 months.

Six of its company directors including Margaret Ng and pro-democracy celebrity Denise Ho have stepped down from the company, leaving Editor-in-Chief Chung Pui-kuen and co-founder Choi Tung-ho at the helm.

The company also terminated the employment contracts of staff who had been with the company for over six months in order to clear their bonuses, and re-employed most of them under a new contract in May.

Apple Daily and other independent news outlets have reported receiving anonymous threatening messages over the past few days, said veteran independent journalist and Global Voices East Asia editor Oiwan Lam on her Patreon page. One message contained a full list naming all directors and staffers employed at the company, including those working part-time. Lam wrote:

I believe Stand News took the risk control measures against such threats — to minimize the collateral damage to individuals and the financial loss once the security police takes action against it.

In response to the changes at Stand News, the Hong Kong Journalists Association said in a statement:

That yet another media restricts its operations under the national security law reflects that Hong Kong’s news industry is facing increasingly severe circumstances. Hongkongers are entitled to the right to freedom of the press and of expression under the Basic Law. HKJA urges the government to take the lead in defending such rights.