Nigeria loses $250,000 for every hour that the Twitter ban persists 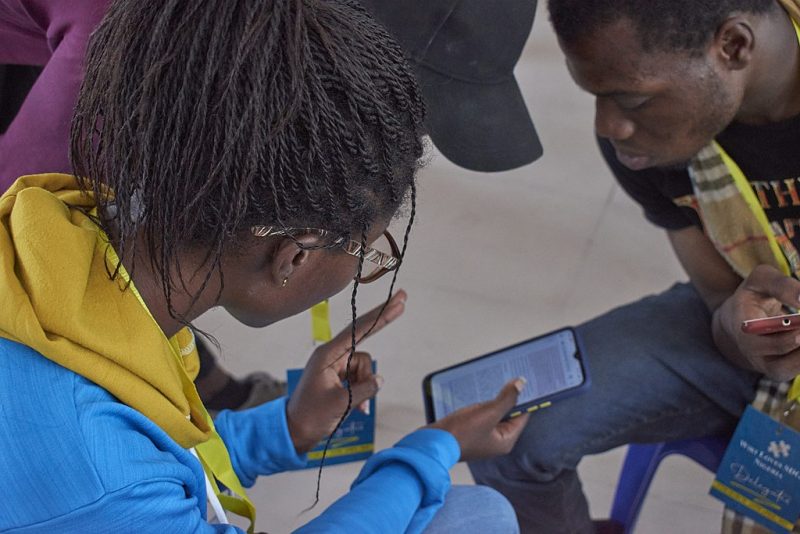 Young Nigerians discussing the contents of a web page opened on a smartphone. Image by James Moore200 via Wikimedia Commons, March 27, 2021, (CC BY-SA 4.0)

Many Nigerians are deeply feeling the loss of Twitter weeks into its shutdown by the government. Aside from the obvious violation of online freedom of expression of its users, the suspension also hurts Nigerians who use the platform for commercial and social activities.

On June 4, 2021, the Nigerian government announced it was suspending Twitter from operating in the country after the company deleted a tweet by President Muhammadu Buhari. In the tweet, Buhari threatened pro-Biafra activists from the southeastern part of the country of a repeat of the 1967-1970 Biafra Civil War, which killed an estimated 500,000 to 2 million civilians.

“Many of those misbehaving today are too young to be aware of the destruction and loss of lives that occurred during the Biafra war. Those of us in the fields for 30 months, who went through the war, will treat them in the language they understand,” Buhari wrote in the now-deleted Tweet.

Angered by Twitter’s action, the government responded with an indefinite ban over “the persistent use of the platform for activities that are capable of undermining Nigeria’s corporate existence.”

On June 5, 2021, the suspension took effect. The government asked all network service providers in the country to restrict access to Twitter.

This ban costs too much

More than 120 million Nigerians have access to the internet, and about 40 million of them have a Twitter account — 20% of the population — according to the Lagos-based research firm NOI Polls.

For many of these users, mostly youths, Twitter has greatly affected their lives. It forms a huge part of their social lives and supports their businesses, as a platform for advertising. Household items, electronics, clothes, and other items are commonly advertised and sold on the platform. Twitter has helped many connect with buyers and clients who would ordinarily have been out of reach.

“We should also remember that Twitter has gone beyond a source of communication for many of our hardworking youths in Nigeria. It has become a source of livelihood for many, irrespective of their political affiliations or religious leanings. Nigerian youths and digital communications organizations earn a living from being able to use the platform to post communications on behalf of their clients,” Seyi Makinde, governor of Oyo State in southwestern Nigeria tweeted.

NetBlocks, a global internet monitor, told the BBC that Nigeria is losing about 250,000 United States dollars for each hour that the suspension is in place. SMEs who built their businesses around the platform, including social media influencers, freelancers, and startups, expressed a significant dip in sales since the ban.

Apart from economic opportunities, the platform has also provided various social benefits to Nigerians. It has been used to raise funds for the sick and vulnerable, locate missing persons, and call ambulances. For instance, in May, Twitter was instrumental in unraveling the kidnapping and murder of a jobseeker in the south part of the county.

Twitter’s support for the #EndSARS protests

Though the deleted tweet has been at the centre of the whole suspension matter, it is only the final straw of a long-term running battle between the Buhari administration and Twitter.

During the October 2020 #EndSARS protests by young Nigerians against police brutality, Twitter was the major focal point for organizers and demonstrators who used the platform to galvanize support for the movement that argues for the dismantling of an elite Nigerian police unit known as the Special Anti-Robbery Squad (SARS).

Twitter's CEO, Jack Dorsey, also supported the protests, calling for donations for the movement. Twitter also made a special emoji for the protest.

Twitter has also given Nigerian young people a voice on burning social and political matters affecting the country. Separatist campaigners like Nnamdi Kanu and Sunday Igboho, as well as activists like Omoyele Sowore also use the platform to organize protests and raise awareness about their movements. This has rattled the government, which has in turn considered regulating social media since the beginning of its administration in 2015.

“Twitter has consistently made its platform available to those who are threatening Nigeria's corporate existence; that is the reason for suspending their operations in Nigeria,” Information Minister Lai Mohammed said a week after the suspension.

Backlash and threats of prosecution for circumventing the ban

Meanwhile, the issue has generated reactions from both local and international stakeholders, with many condemning the government’s action. The diplomatic missions of the European Union, United Kingdom, the United States, Ireland and Canada, in a joint statement affirmed that “the fundamental human right of free expression and access to information as a pillar of democracy in Nigeria as around the world.” The diplomats expressed their displeasure over the Twitter suspension, asserting that “these rights apply online as well as offline.”

The Biden administration also condemned “the ongoing suspension of Twitter by the Nigerian government and subsequent threats to arrest and prosecute Nigerians who use Twitter,” in a statement on June 10, 2021.

Meanwhile, as the suspension enters weeks without a resolution, more Nigerians are finding alternative paths to access the microblogging service after major telecom providers blocked access. Many are using Virtual Private Networks (VPN) to bypass the blockage.

In reaction to their defiance, the Nigerian government, through the justice minister Abubakar Malami, threatened to prosecute people using VPN to access Twitter.

Malami's threat was met with a backlash, with many saying they were not aware of any law that makes it illegal to use Twitter. Those who called out Malami include a former minister of education, Oby Ezekwesili.

How many fellow Nigerians presently on @Twitter are happy to be prosecuted by @NigeriaGov for exercising your constitutionally guaranteed right to speech and association?

Please join me and joyfully ??‍♀️??‍♂️your hands so @MalamiSan can find us quickly and take to court.#KeepitOn

There are also reports that the government is in talks with China to build an internet firewall, which will block Nigerians from accessing Twitter via VPN. China’s Great Firewall restricts access to Google, Facebook, Twitter, WhatsApp, Instagram, and similar platforms in the country.

In its bid to find a replacement for Twitter, the government has been considering promoting a different microblogging platform named Koo and has since created an account on the Indian-owned social media platform. Some government officials have also registered on the platform.

Both Twitter and the Nigerian government may soon commence talks to resolve the issue. A resolution to the conflict will bring a sigh of relief to many Nigerians who have been affected by the suspension.