"Investigate the violence, not the messenger" 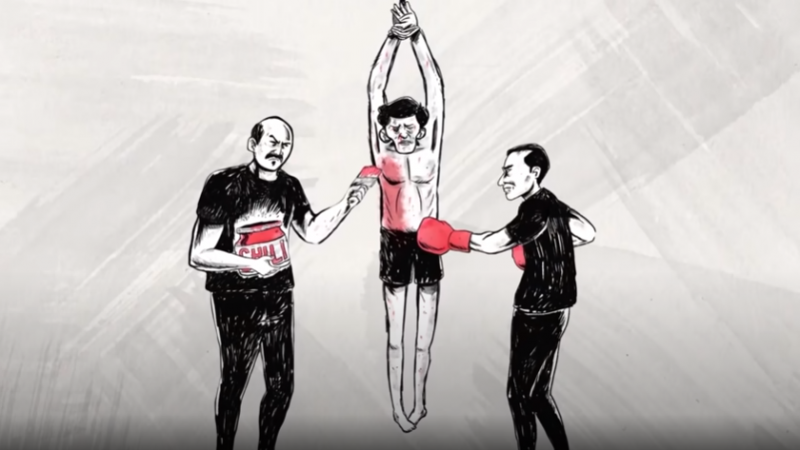 The Freedom Film Network (FFN) premiered a four-minute animation “Chilli Powder and Thinner” on June 12, which features testimony from a 16-year-old boy who, along with two other individuals, was allegedly arrested and beaten up by police. Human rights groups are urging Malaysian authorities to probe allegations of police torture instead of harassing the artists and activists who created the film.

The title refers to the torture method used against the boy: the application of chili powder and paint thinner to the skin.

On July 2, the police questioned FFN filmmaker Anna Har and cartoonist Amin Landak about the film. The police also raided the FFN office as well as Landak's home. They are being investigated under Section 500 of the Penal Code for defamation, Section 505 (b) of the Penal Code for statements that could cause public alarm and distress, and Section 233 (1) (a) of the Communications and Multimedia Act for improper use of network facilities.

The price of making a documentary about police brutality in Malaysia. Having your office and home raided by law enforcement and investigated under a draconian law. @freedomfilmfest https://t.co/nR6a8dpd2r

Stop this intimidation! Police are raiding the office of the @freedomfilmfest in Petaling Jaya and the house of cartoonist Amin Landak today.

The raid is related to their investigation of Anna Har of FFN and Amin over the release of the film “Chilli powder and Thinner”. pic.twitter.com/dEzKA4U9Iy

The police's actions were widely condemned by civil society groups. But it didn’t stop the police from summoning four activists belonging to human rights organization Suara Rakyat Malaysia (Suaram) and Malaysian activist coalition MISI: Solidariti on July 6 in connection to the short film.

They are heading in now pic.twitter.com/XdjAWx1QGt

Investigate the allegations of torture and death in custody: Not the people who speak out!

These ongoing harassments against activists, journalists, and artists attempt to silence our voice and deflect the public pressure on the prevalent cases of custodial death in the past few months.

In the statement, the FNC listed demands for police reform, including establishing an Independent Police Complaints of Misconduct Commission (IPCMC).

For the last 18 years, we have told human rights stories exposing injustices faced by ordinary people to bring about change. The investigation and raid over the animation film “Chili Powder and Thinner” has galvanised us. pic.twitter.com/e1h0wx5Spr

In a podcast interview, Har said harassing artists is not the proper response from authorities when faced with allegations of abuse.

Ideally what would have been best would be the police… investigate the case itself and find out if this is really happening. And if it does, then take action, then tell the public, that will instil public confidence. By doing something like this…[it] just looks like intimidation.

MISI: Solidariti reiterated in a statement that the FFN have done nothing wrong:

Today, one of our founders was investigated by the police for doing what all of us would have done- shed light on injustice. We're a youth-led collective fighting for what's right. This is a heartfelt message we want to convey to all of you.

The case has attracted international attention. A joint statement from The Centre for Independent Journalism and their partners said the police's actions reflect the worsening suppression of free speech in Malaysia:

Retaliatory investigations against human rights defenders, artists and journalists for raising attention to violations of basic human rights show the dire need to protect freedom of expression and ensure police officers in Malaysia are held accountable for any instances of misconduct.

Similarly, Zaid Malek of the Lawyers for Liberty noted in a press statement that the raids and interrogations conducted by the police affirmed the allegations made in the film:

The heavy-handed response of the police to a short film on police brutality with interrogations and raids underscores the exact problem that the short film tries to address; instances of unlawful acts by police conducted with impunity.

Having looked at the entirety of the video, there is nothing in it that warrants a police investigation.

Our organisations are concerned about the raids on their office and home which we believe are aimed to intimidate them and to create a chilling effect for those who would like to speak up and expose abuses by the authorities.

Groups supporting the beleaguered artists and activists are calling for a social media campaign on July 10, encouraging users to share their views or reactions about the film.