The organisation has long been a thorn in Kremlin's side 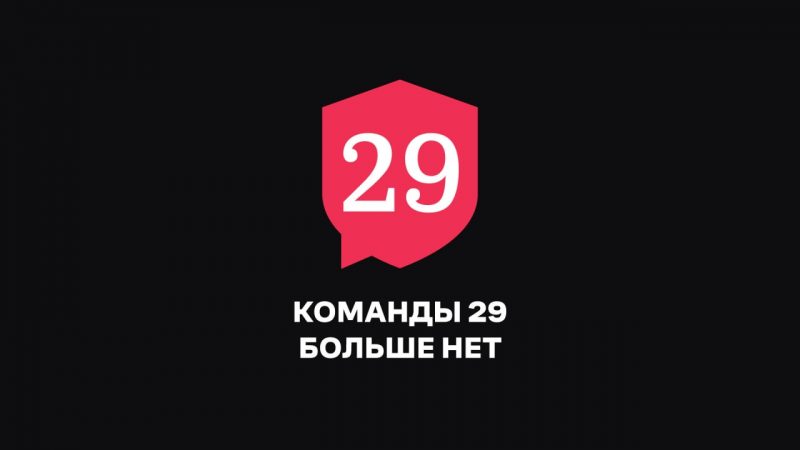 For almost seven years, Team 29 (Komanda 29), a group of independent lawyers, attorneys, advocacy experts and journalists, has fought for the rights of Russian activists, political prisoners, and other citizens. On July 19, the group announced it was shutting down its operations in order to protect its staff and clients from possible criminal prosecution.

The decision to suspend their work comes after Russia's internet regulator Roskomnadzor blocked Team 29's website—allegedly, for publishing content produced by Spolecnost Svobody Informace (Freedom of Information Society), a Prague-based non-profit organisation which the Russian state had labelled as an “undesirable organisation” earlier in June 2021.

In a July 18 post on their Telegram channel, Team 29 said the Russian prosecutors had “conflated” the group with the Czech NGO (implying they were the same organisation), a charge that Team 29 denies.

While its lawyers plan to appeal the allegations as “arbitrary and contrived”, the group decided to act swiftly out of an abundance of caution to prevent further criminal charges against its staff, collaborators and supporters.

Under these circumstances, the continued activity of Team 29 poses a direct and obvious threat to the safety of many people, and we cannot ignore this risk. We are making the difficult decision to suspend the activity of Team 29. The attorneys and lawyers will continue to work on their client's cases in a purely private capacity, unless the defendants refuse their services given the current situation.

We are closing all of the Team 29 media projects and purging the archive: all (!) texts, guides, reports, investigations, legal explainers, stories of political prisoners, court documents, interviews, podcasts, our literary project, our social media posts—the existence of this content online can be construed as “disseminating materials of an undesirable organisation” according to the logic that was used to block our website.

In their Telegram statement, the group also implored its supporters to delete any direct links or reposts of their content, as these could be interpreted as participating in the activity of an “undesirable organisation”. However, mentioning the organisation or sharing opinions about the situation was not illegal, according to the team.

Additionally, Team 29 said it was shutting down its crowdfunding efforts, and would refund subscribers for any funds that were unspent.

The founder of Team 29, Saint Petersburg-based lawyer Ivan Pavlov, is himself currently under investigation and facing felony charges for his work defending Russian journalist Ivan Safronov who is accused of treason. Though he now heads Team 29, Pavlov was previously the inaugural president of the Czech NGO, but hasn't been involved with the Freedom of Information Society in any official capacity for the past five years.

Though it's their digital footprint that is facing pressure from the authorities, Team 29 is best known for their legal support and human rights work in Russia. Writing on his own Telegram channel, Ivan Pavlov argued that it was this work on the ground, defending Russian citizens, that got Team 29 in trouble:

Our authorities have done everything to criminalize the activity and even our very name, Team 29. This is a peculiar sort of recognition of the effectiveness of our work and a compliment from our procedural opponents, who once again have been exhibiting unsportsmanlike behavior.

Founded in 2014 by Ivan Pavlov, a lawyer and freedom of information advocate, Team 29 has long been a thorn in Kremlin's side. After authorities blacklisted Pavlov's previous organisation, Institute for the Development of the Freedom of Information, as a “foreign agent”, Team 29 was born.

Since then, the group of defense lawyers, attorneys and reporters has taken on some of the most high-profile political cases in the country, including the trial of scientist Viktor Kudryavtsev on treason charges, the court battle around the designation of Alexey Navalny’s political movement and anti-corruption organisation as “extremist,” and the case of Karina Tsurkan, a former energy executive who was sentenced to 15 years in prison on espionage charges in December 2020.

Apart from defending political prisoners and activist groups in court, Team 29 has also published legal advice guides (archival link), spearheaded creative anti-corruption investigations, and even provided legal representation for a whistleblower from the infamous “troll factories” who took their Internet Research Agency to court in a labour dispute.

In an interview to independent Russian news website Meduza, Evgeny Smirnov, a lawyer formerly with Team 29, said that the latest events were likely “a cumulative effect” of all of their high-profile work. He said both he and Pavlov have received threats implying they were “like a bone in the throat not only for investigators, but also other people and state agencies”, so “that is why the decision was made to bomb us with everything they have”.

Despite the closure of their website, the group said its individual group members would continue their ongoing legal defense work as private individuals. According to Ivan Pavlov‘s Telegram post, Team 29 was “never a formal organisation, but rather a collective of like-minded people” and that “as long as there are people, there will be new ideas and new projects”.