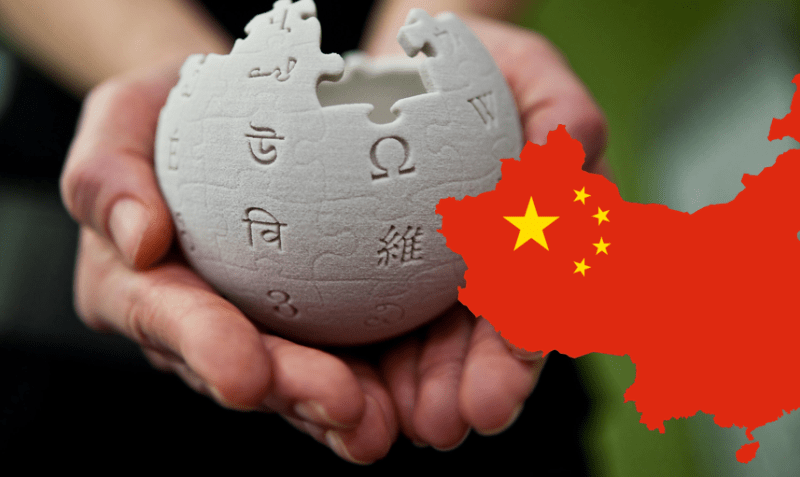 The Wikimedia Foundation has banned seven users and revoked administrator rights of twelve mainland Chinese administrators following an investigation on alleged infiltration of Wikipedia that may threaten the safety of the platform’s Chinese community.

Wikipedia is the world’s most popular online encyclopedia. The latest controversy concerning Chinese Wikipedia surfaced after Stand News and the Hong Kong Free Press reported on an ‘edit war’ between mainland Chinese and Hong Kong users over entries related to Hong Kong, such as the 2019 anti extradition protests and the Yuen Long subway attack incident on July 21, 2019. Screenshots of a conversation on a mainland Chinese Wikipedia chat group showed some community members discussing reporting Hong Kong Wikipedia users to the national security police. 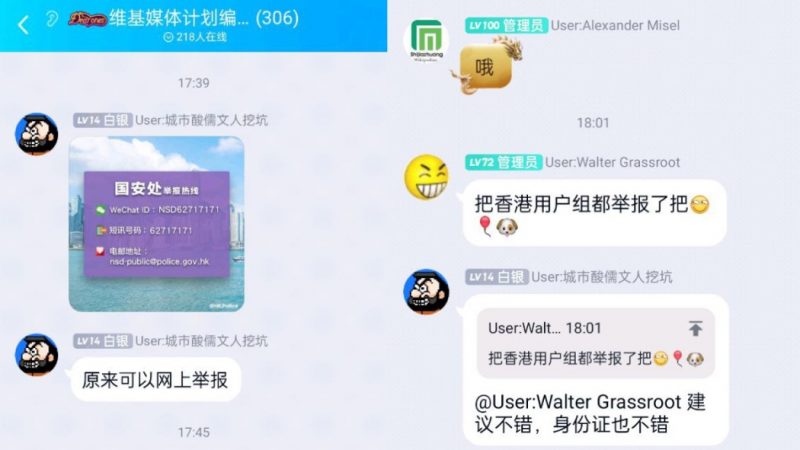 A screenshot of a conversation where a user suggests reporting Hong Kong Wikimedia users to the national security police. Via HKFP

The Foundation released a statement on September 13 reading:

We have banned seven users and desysopped a further 12 as a result of long and deep investigations into activities around some members of the unrecognized group Wikimedians of Mainland China.

The ‘unrecognized group’ refers to WMC, which has more than 300 members and claims to represent the mainland Chinese Wikipedia community.

The Foundation further explained that the unprecedented steps were taken as ‘some users have been physically harmed’ as a result of the “exposure of personal information to users in mainland China.”

In order to understand the Foundation’s decision and the details of the threats faced by the Chinese Wikipedian community, Global Voices interviewed a veteran editor from mainland China through email. The editor's identity is anonymous due to security concerns.

Oiwan Lam: Several media outlets have described the editing debates between mainland Chinese and Hong Kong Wikipedians as a war. Do you agree with the ‘war’ metaphor?

Mainland Chinese Editor: This is not a war between Hong Kong and mainland Chinese Wikipedia users. The incident is caused by a prolonged violation of community rules by some users. And the community has failed to solve the problem internally. These abusive users mostly came from an online chat group WMCUG (Wikimedians of mainland China user group) or WMC (Wikimedians of mainland China). They claimed that they represented Wikimedians in mainland China and gave people a wrong impression. The abusive behaviors include shielding each other in the editing process, election canvassing and excluding those who disagreed with them. As a result, they were not sanctioned when they verbally attacked other Wikimedians or even if they were sanctioned, other administrators would lift the sanction.

OL: Can you point to specific editing incidents that sparked debate? How did the Wikipedian community in your region react to the incident? And what can be done to improve communication?

MCE: There are different types of debates, one caused by cultural conflicts as every individual has their own culture and value systems and conflicts are inevitable. Another type of conflict is among nerds, they usually argue about expressions, particularly on a term's neutrality. These two types of conflicts can be resolved by the current Wikipedia mechanisms. But the debate can be very unfair if a group of people have strong coordination and pressure other community members to support their views while others are participating in the debate as individuals. In such a situation, the conflict cannot be resolved from within.

OL: The national security education in the greater China region has encouraged netizens to report individuals and acts that undermine the authority of the central and regional governments to the National Security Police. Are you worried that someone might report your editing work? What’s the impact of such policies on the Wikipedia community?

MCE: Yes, this is a very terrifying trend and such a political culture has a very grave impact. Among those who were banned by the foundation and some members in the WMCUG, in addition to the screenshot of the conversation to report other users to the national security police, sometimes the attitude or manner reflected in discussions is quite typical of [police] informers. Many Wikimedians from mainland China, and in recent years from Hong Kong and even Taiwan (as they have connections to mainland China) have become extremely careful in editorial discussions, in particular when the topics are related to politics. While the national security authorities may not pay attention to the debates, people would be worried that these discussions would be recorded and used against them in the future.

OL: Have you heard of anyone in the Wikipedian community who have been threatened, interrogated or arrested by police for what they have said or written on Wikipedia?

MCE: I have not heard of anyone being threatened by what they said or wrote on Wikipedia. But I have heard that someone had been threatened for their involvement in Wikipedia related activity. A commercial organization was invited to ‘an interview’ [editor note: interview usually means “interrogation” by police or other authorities in mainland Chinese context] for collaborating with Wikipedia.

OL: Are you concerned about infiltration? Can you explain why or why don’t you think it is a problem?

MCE: The term ‘infiltration’ is a bit misleading as it has been widely used in politics and international relations. The infiltration concern raised by Wikimedia Foundation refers to people or groups that had harmed the Wikimedian self-governance rule to the extent that it could not be resolved internally.

OL: I noticed that there were calls (Xinjiang Plan 2021–2030)  among mainland Chinese Wikipedians to edit pages related to Xinjiang, although the editor (Walter Grassroot) was sanctioned, some are still worried that similar campaigns would eventually turn Wikipedia into a Chinese propaganda branch. How can Wikipedia mitigate similar kinds of calls for political editing?

MCE: Under the editing principle adopted by Wikipedia, I am not worried about this problem. In fact, it is not unusual to see similar kinds of editing calls on topics related to politics, natural science, women, poverty etc. The contents of Xinjiang Plan 2021–2030 is not entirely political, although the call may be driven by political intention. What I am worried about is the quality of the Chinese content on Wikipedia. We need good writers, media outlets and publications to ensure our quality. But I am quite pessimistic about the trend. Our editing work relies on outside sources, and for Chinese Wikipedia, we rely on quality information sources from the pan-Chinese culture circle.

OL: Do you agree with the Wikipedia Foundation's decision to ban seven users and revoke the admin rights of twelve mainland Chinese administrators?

MCE: This is a very complicated issue. Apart from those who are responsible for the investigation, no one has a full picture of what exactly happened. According to the Foundation, the latest disputes surfaced more than one year ago and the Foundation started an investigation [on Chinese Wikipedia] in 2017. The challenges we are facing now can be traced back as far as 2013. Many users have raised the issues to the Foundation and I am sure that the Foundation has adequate evidence to make such a decision.  My feelings are divided. On the one hand, I am thrilled as if a disease has been cured. On the other hand, I am worried if the intervention is too radical that it may affect the self-governance of the Chinese Wikipedia community. On the whole, I think the community has to think about how to address the problem internally and prevent similar harms from occurring in the future.