The report assesses human rights in digital space across 70 countries 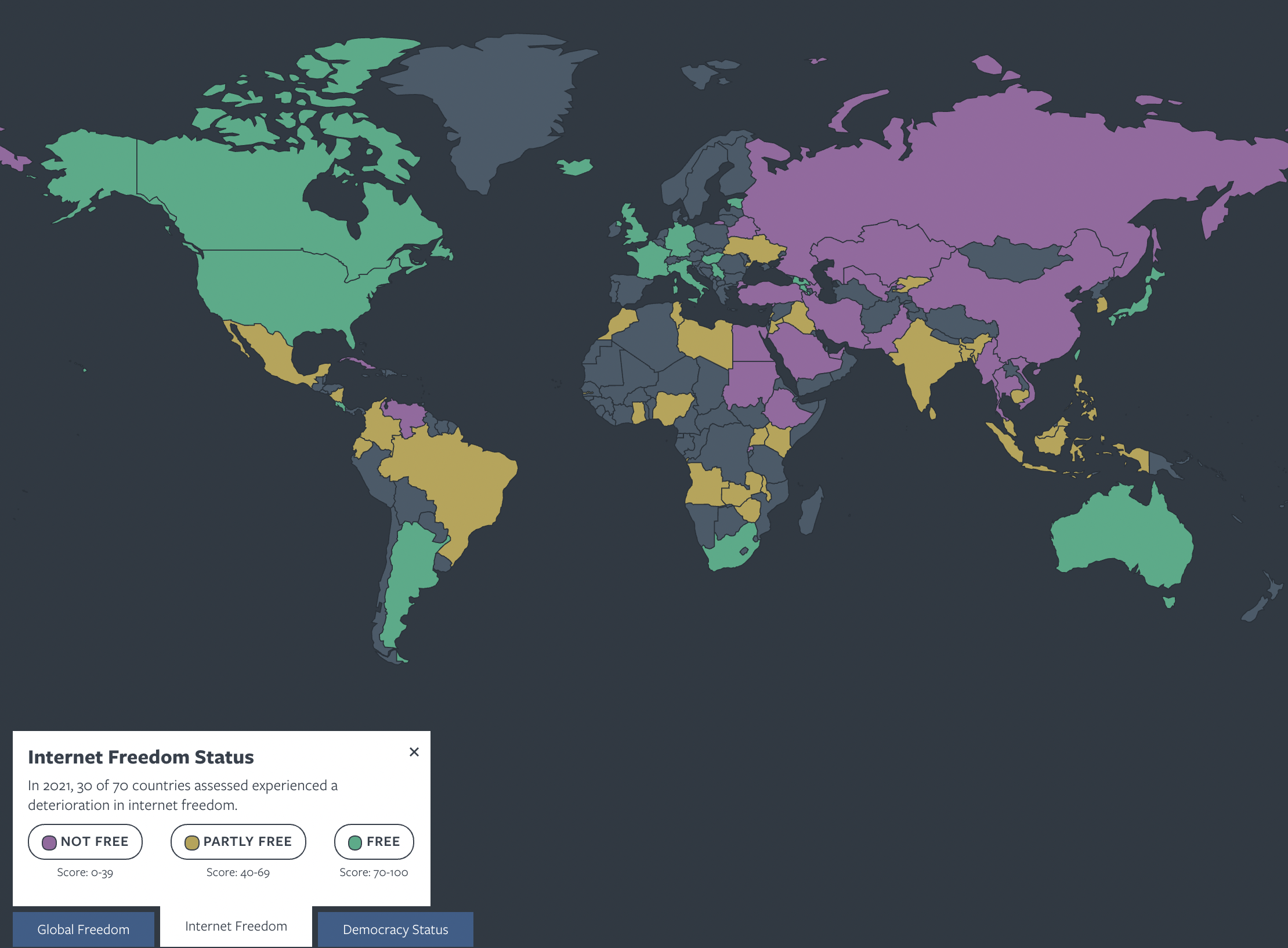 A screenshot from the Freedom House Freedom on the Net map.

Freedom House, a human rights watchdog, released the newest edition of its Freedom on the Net report on September 21. The report concludes that “internet freedom declined globally for the 11th consecutive year.” The report assesses the situation of human rights in the digital space across 70 countries. What are the report's conclusions on Turkey, Georgia, Armenia, and Azerbaijan? Here is a closer look.

It's here➡️#FreedomOnTheNet 2021: The Global Drive to Control Big Tech

A ?on our key findings https://t.co/2dQWiYrjl2

The new report concludes that although the South Caucasus country indicated improvement in internet freedom, disinformation remains an issue. Georgia received a score of 77 out of 100, earning it a “free” ranking.

Internet freedom improved in Georgia, due to no reported arrests linked to people’s online activity. However, several challenges related to the number of cyberattacks and domestic content manipulation were observed during the coverage period.

The 2021 report ranked Armenia as “free,” with the country receiving an overall score of 71 out of 100, despite the government's restrictions on information flow during the country's armed conflict with Azerbaijan in 2020.

The implementation of martial law in late September 2020 placed broad restrictions on the media’s ability to report on the fighting, including by banning speech deemed to endanger national security, permitting authorities to demand content removal, and mandating fines for noncompliance. A number of Turkish and Azerbaijani websites with .az and .tr domains were inaccessible for several weeks. Users also reported problems accessing TikTok. Prominent news sites also faced technical attacks, including distributed denial-of-service (DDoS) attacks, leaving many of them temporarily inaccessible during the conflict.

For a third year, Azerbaijan was ranked “not free” in the global report. The government throttled access to the Internet for 44 days last year, as Azerbaijan fought with Armenia over the Nagorno Karabakh province.

The country also utilized intrusive surveillance technology against citizens, including Pegasus, produced by the Israeli cyber surveillance company NSO Group. The report highlights how the backbone internet provider Delta Telecom worked with Sandvine, a Canada-baed company, to install Deep Packet Inspection technology to block live streaming on YouTube, Facebook, and Instagram. Azerbaijan has been deploying Deep Packet Inspection technology since at least 2009, according to a joint report released early in September by International Partnership for Human Rights and Azerbaijan Internet Watch.

In Turkey, the overall decline of internet freedoms for a third year earned the country a “not free” ranking as it received a score of 34 out of 100.

Internet freedom continued to decline for a third year in a row in Turkey. During the coverage period, hundreds of websites were blocked, in some instances under a new social media law. Online content deemed critical of the ruling Justice and Development Party (AKP) or President Recep Tayyip Erdoğan was removed from websites and social media platforms, and online activists, journalists, and social media users were harassed both physically and online for their social media posts. Authorities arrested users of the online platform Clubhouse in response to student-led resistance at Boğaziçi University, targeted LGBT+ activists online, and arrested a prominent opposition party official for allegedly insulting the president. Criminal cases were carried out against those who posted undesirable commentary on social media, and the threat of online surveillance, harassment, and criminal penalties has contributed to the growing practice of self-censorship among internet users in Turkey. The proliferation of restrictive laws has further formalized censorship in the country.

Speaking to Bianet, the report's author, the European Centre for Press and Media Freedom said, “New or increased taxes, restrictions on access, deleted news content, the ability to close access to entire platforms, and most importantly, the detention or arrest of people who exercise their freedom of expression due to their critical statements on the internet, and the conviction of some of them, shows that there is a long way to go in terms of internet freedoms in Turkey.”

Freedom on the net rankings and scores are based on a set of 21 questions, which are divided into nearly 100 subquestions in total. The report is divided into three categories including, obstacles to access, limits on content, and violations of user rights.