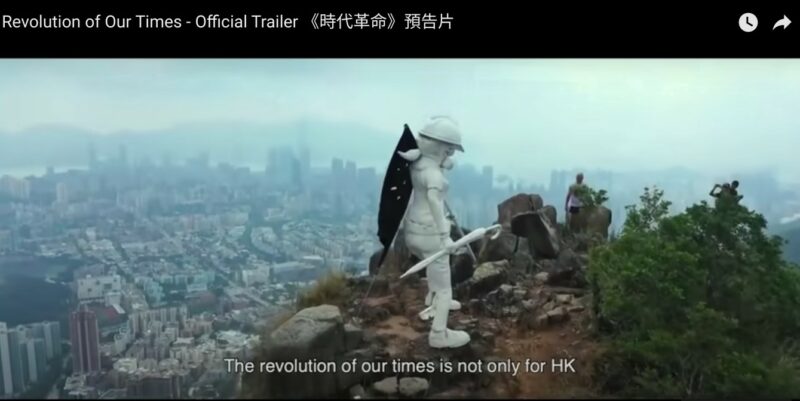 Screen capture from the trailer [1] of “Revolution of our Times” on Youtube.

The following post was written by Kelly Ho and published [2] by Hong Kong Free Press on October 27, 2021. It has been republished on Global Voices under a content partnership agreement.

Hong Kong's legislature has passed a bill [3] which will enable the government to prevent films deemed contrary to national security from being screened or published in the city. Any person who exhibits an unauthorized film could face up to three years in jail and a 1 million HK dollar fine (approximately 130,000 US dollars).

The proposed amendments to the Film Censorship Ordinance were approved on October 28, with landslide support from pro-establishment lawmakers during their last meeting in the sixth Legislative Council (LegCo) term.

The new law will require film censors in Hong Kong to evaluate whether the exhibition of a film would be “contrary” to national security interests before allowing it to be screened locally.

Under the new law, the city's chief secretary (currently John Lee [4] who is a former police officer), a member of the Committee on National Security, will gain sweeping powers to revoke approvals at any time if they believe the presentation of a film will harm national security.

An inspector authorized by the censorship agency may also enter and search premises without a warrant if they are trying to halt an unauthorized film screening or publication if it is “not reasonably practicable” to obtain a warrant.

Heavier penalties will be imposed on those who show films that are not exempted or approved by the authorities, as the offense is punishable by up to three years in prison and a 1 million HK dollar fine.

Local film censors may ask for up to 28 days to review films that may involve national security considerations. Filmmakers may not challenge the censorship body's decision, as the new legislation will bar the Board of Review from reconsidering decisions made on national security grounds.

The new stipulations came months after Hong Kong director Kiwi Chow debuted [5] his documentary “Revolution of Our Times” at the Cannes Film Festival in July. The film about the 2019 anti-extradition bill protests [6] was not exhibited in Hong Kong and was slammed [7] by local Beijing-backed newspapers as advocating independence, a major offense under the national security law.

Other documentaries related to the 2019 unrest, including “Inside the Red Brick Wall [8]” about the siege of the Hong Kong Polytechnic University, have been pulled from commercial screening.

In urging the lawmakers to pass the bill, the government said in a LegCo document [9] that there were films portraying national security offenses and depicting “serious criminal behaviour.” They claim the overall content, context, and arrangement of these films would be effectively “endorsing, “glorifying or inciting” people to commit those acts — particularly impressionable young people.

Currently, some films which have been deemed politically sensitive, such as “Ten Years [10]“, are available to view on video streaming sites and platforms like Netflix.  Some legislators like Luk Chung-hung of the Hong Kong Federation of Trade Unions suggested the government update the laws to fill the “loophole.”

“The framework of the ordinance is outdated… I am worried this may become a major loophole in the future,” Luk said.

In response, Secretary for Commerce and Economic Development Edward Yau said the suggestions to regulate films shown online would be outside the scope of the bill. He said the government would need more time to “carefully and comprehensively” consider adding further changes to the local film censorship system.

When asked if YouTube or other online platforms would be affected by the current legislation, a spokesperson for the Commerce and Economic Development Bureau told HKFP in August that “other” laws apply to the internet.

“[TV] broadcast and the Internet are subject to other applicable law and regulations. Whether an act constitutes a crime or otherwise would depend on its specific circumstances and evidence, and cannot be taken in isolation or generalised,” they said.