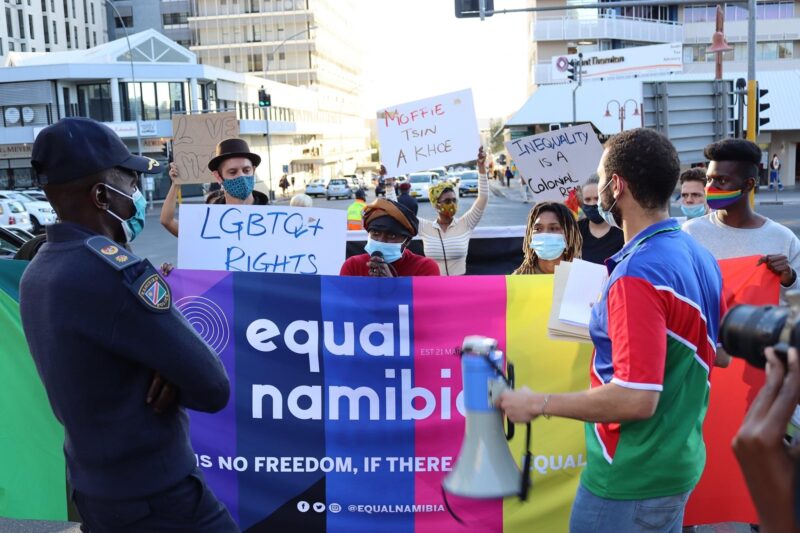 Protesters marched the streets of Windhoek, demanding equal rights for the LGBTQ+ community. Image by Equal Namibia, used with permission.

In March 2021, the twin daughters of a Namibian same-sex couple were born via surrogacy in South Africa. Even though one of the fathers, Phillip Lühl, is a Namibian citizen, the authorities refused to issue the necessary travel documents to bring the twins home. Instead, they demanded Lühl to undergo a DNA test to determine the children's parentage, causing outrage within the Namibian LGBTQ+ community and beyond.

Namibian activists raised national and international attention by making the case public on social media, which put the Namibian legal system and government under significant pressure, reaffirming that social media remains an important space for raising the voices of groups that can otherwise be silenced.

In a video message, Phillip Lühl made his case public. The video went viral and the daily newspaper The Namibian shared it on Twitter account:

FAMILY SEPARATED: Two newborn baby girls are unable to travel from South Africa to their parents’ home in Windhoek, after the home affairs ministry refused to issue travelling documents to them. Their parents are a same-sex couple, married in South Africa six years ago. pic.twitter.com/sbgzCvMt5Z

Lühl took the Ministry to court, arguing that the request for a DNA test contravenes both Namibian and international law. The Namibian Constitution promises citizenship by descent to anyone whose parents are Namibian citizens. Furthermore, the first paragraph of the Universal Declaration of Human Rights states that “all human beings are born free and equal in dignity and rights” — thus the requirement to prove parenthood attacks the dignity of the couple. Yet, in the end, he had his petition denied.

As the newspaper The Namibian reported on April 19, judge Thomas Masuku ruled that it would be “judicial overreach” to obligate the authorities to issue the travel documents to the two girls. That didn’t stop the couple from demanding equal rights. “Now it was time to make noise,” their lawyer Uno Katjipuka told Global Voices on Zoom. “The idea was to put pressure on the government to change their position on the girls coming in, which worked and didn't work.”

After the social media furor, the story of the Namibian twins stuck in South Africa was covered by media outlets in Namibia and abroad. “The case really went international,” said Katjipuka. “But even with all the noise, the court took the easy way out trying not to piss off the government in the first round.” After two months, the authorities finally issued the emergency travel documents allowing the twins to enter Namibia. “I brought a second application, and then the government didn't oppose it. And I think that was because of the pressure and the international exposure,” asserts Katjipuka.

Still, even though the family was reunited, the children’s citizenship by descent remains undecided. Ordinarily, children of Namibian citizens automatically get Namibian citizenship as well, but this has not been the case for the twins, nor for the family’s first-born son who was also born in South Africa via surrogacy.

For a short period of time, it seemed like the family was winning its battle: On October 13, the High Court declared their first son a Namibian citizen. Not only media outlets reported the verdict but also Equal Namibia, a group of activists focusing on LGBTQ+ and women's rights.

But even though the Windhoek High Court declared Lühl and his partner's first-born son a Namibian citizen, the Ministry of Home Affairs then announced an appeal to the ruling of the high court. According to the ministry, “the High Court erred in law and in fact,” causing an immediate reaction both online and offline.

?CALL TO ACTION?
On Monday, we stand against homophobic policies in our Born-Free Nation. @MHAINamibia can not continue to abuse taxpayer funds and public policy to target LGBTQ+ families and children. Join us as we fight for what’s right.
?️‍⚧️???️‍?#NoHateInMyState #WeBelong pic.twitter.com/gHx8KsbqiY

Social media continues to be an important tool for LGBTQ+ advocacy in Namibia. This is not the first time Namibian activists have used social media as a tool to reach a broader audience and put pressure on their government. “Last year, there was a critical moment that started on social media activism,” affirms Namibian author and activist Ndiilokelwa Nthengwe in an interview with Global Voices on Zoom, referring to activists launching and disseminating an online petition and social media campaign calling for the legalization of abortion.

Similarly, later in 2020, protesters marched the streets of Windhoek demanding immediate political action on sexual gender-based violence, which in the Namibian context includes sexual assault, rape but also femicide. These protests were met with tear gas and rubber bullets, and 27 participants were detained. In the face of these incidents, the Minister of Home Affairs Frans Kapofi apologized for the police brutality and the Ministry of Gender Equality invited protesters to a consultative meeting.

Yet, the case of the twin daughters attracted even more international attention than these mobilizations. “We had activism before. Obviously, every civilization has. But this one was very specific,” says Katjipuka. Many twitter users declared their solidarity with the hashtag #bringpaulaandmayahome, and tweets about the case have been shared in huge numbers.

“Usually, you only get pockets of society, but the population at large is ambivalent. No one really cares because it doesn't affect them directly,” says the lawyer. But even though most Namibians were not affected directly when it came to the twin daughters, many people stood in solidarity. “After we lost round one, I don't know how many people came to me to express that I must do better, and I must bring those twins home.”

“I think that when we had the court cases, it definitely brought more attention to the people because it is a case that's not been heard of before in the media,” says Nthengwe. But it’s not only the novelty of the case that caught people’s attention; the activists’ campaign was also set up in a different way, as Nthengwe explains. “We said: Okay, let's try a different angle when we go to the court cases. We started with activism online and continued to bring more content to people that were onlookers. And I think in that way we continued the momentum online.”

Ambiguous position of the government

Eventually, the twins were allowed to enter Namibia, but interest in the case did not diminish even then. The question of whether they and their brother will be granted citizenship remains open.

And the conversation continues online. When the Ministry of Home Affairs appealed the high court's ruling and thus the children's right to Namibian citizenship, activists prepared themselves for state-sanctioned homophobia on Twitter. As such, the Delgado-Lühl family remains a symbol of the LGBTQ+ community’s fight for equal rights.

Meanwhile, lawyers like Katjipuka continue to challenge the Ministry of Home Affairs on the decision to deny citizenship to a child of a same-sex couple born via surrogacy. “Putting pressure on the government worked,” she says. “But our government is very special. We have a president who is open minded when it comes to equal rights, and we have a first lady who is very open minded and very outspoken. But our minister of home affairs doesn't care, and the cabinet largely also doesn't care.”

Social media has also been a platform where leaders like First Lady Monica Geingos frequently call out homophobia and sexism, beyond calling it out in real life. Geingos doesn’t shrink from criticizing the current legislature in Namibia, for example the outdated sodomy law that prohibits men from having sex with men that hasn’t been enforced for more than 20 years. This creates room for activists to continue to challenge the status quo both legally and socially.

“It's not so much about whether or not people are aware” according to Nthengwe. “People hold on to their own ideology according to their values, according to their perspective and according to their community and how they grew up as people.” The challenge for Namibian activists and lawyers therefore goes beyond using social media to create awareness. Instead, Nthengwe insists that activists must challenge the legal system as well, ensuring that they do not “lose sight of our jurisdiction, of our judicial system.”