The law fights for citizens under dictatorial rule 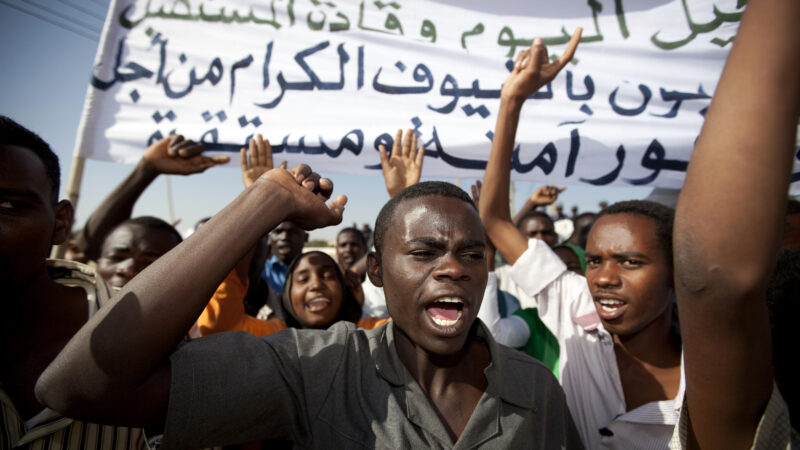 Demonstrations erupted outside the University of Zalingei in West Darfur as a peace negotiation team, headed by Ahmed bin Abdullah al Mahmoud, Qatari Minister of State for Foreign Affairs, and Djibril Bassolé, Joint African Union-United Nations Chief Mediator for Darfur, meet with civil society leaders inside the university. At least one protester was killed, and several wounded, during clashes with security forces. Image via Flikr courtesy of UN Photo. (CC BY-NC-ND 2.0)

The law wins fights for citizens under the dictatorial rule: this is what happened in Sudan when a judge ruled to restore the internet service to the Sudanese after it was cut off in the aftermath of the October 25 coup.

In the last three years, Sudan has experienced numerous internet outages and interference owing to the ongoing political crisis. The government also orders outages during the nationwide secondary school exam, known as the Sudanese Certificate, as a way to prevent cheating with outsiders sending answers to those taking the exam. These incidents have raised alarm over the growing use of internet shutdowns both in Sudan and in the greater region. Yet, the legal basis for internet shutdowns has never been properly examined, even though it might offer insight into possible paths for advocacy against the practice.

After ousting Omar al-Bashir in 2019, Sudan has been ruled according to a power-sharing agreement between the Forces of Freedom and Change (FFC) and the Transitional Military Council. This ruling regime worked to stabilize the country by considering peace as the mission of the highest priority. In 2020, the government signed the Juba peace agreement with the rebels and shared the power with them. Since then, some of the rebels have worked with the military to oust the FFC from the ruling. In October they held a sit-in in front of the Republican Palace, after which General Burhan announced a military coup ousting the FFC.

The last internet shutdown in Sudan began on October 25, 2021, and lasted for twenty-five days. It took place during Lt. Gen. Burhan‘s coup. He is the general commander of the Sudanese Armed Forces — the official name of the Sudan Army — and justified the internet shutdown by saying it would “save the national unity and national security from the threats that the state is facing.”, as illustrated in the screenshot below: 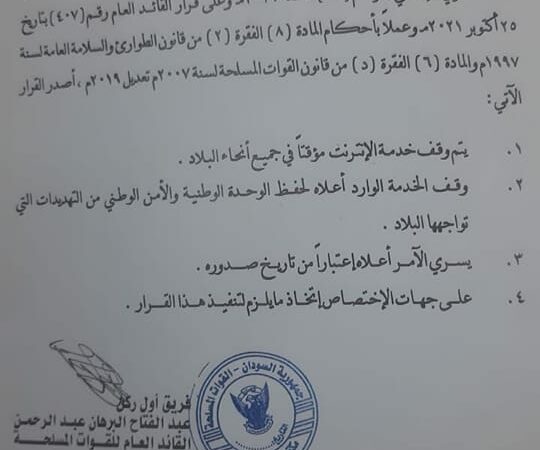 Burhan's decision to shut down the internet. Screenshot of image circulating on the internet, including on Facebook.

The shutdown was also based on the Armed Forces Law, and the Emergency Law, which are two broad laws that are invoked to give the executive broad powers during times of political unrest.

Article 6 (d) of the Armed Forces Act says that the Sudanese Armed Forces are required to “respond to legally defined emergency situations.” While Article 8 (2) of the law on emergency and public safety of the year 1997 gives the president power to legislate anything without concerning the legislative authority or the “the parliament,” however undemocratic this may be.

Given that the existing authority at that time was claimed via a coup, all of their subsequent decisions are unconstitutional, including the use of these laws.

The mechanics of internet shutdowns in Sudan show collaboration between the government and the private companies that provide internet services to Sudanese people. Netblocks, an internet access watchdog,  has been monitoring the internet shutdown in Sudan by providing daily follow up and updated report about the internet status in Sudan. They found that only mobile data has been turned off by disabling the Access Point “APN,” similar to the shutdown of 2019. After almost 12 hours of shutdown, the internet service came back for only two hours before being was disabled again by a different method. This second time, the internet was shut down by blocking any traffic from outside Sudan and routing the only local-hosted services such as e-banking services and taxi applications.

⚠️ Confirmed: Internet partially restored in #Sudan on 25th day of post-coup blackout; real-time metrics show significant rise in cellular connectivity from ~4:30 pm local time; it is unclear if service will be retained, or for how long 📈

Days after the coup, an alliance consisting of the Sudanese Consumer Protection Organization (SCPO), Dr Yassir Mirghani, the Secretary-General of SCPO, Abdalazeem Hassan on behalf of the allied attorneys’ law firm, Salma Mohamed and Tasneem Hashim filed suit challenging the internet shutdown on the basis of their subscription contracts with the telecom companies. On November 9, 2021, the general court of Khartoum ordered the Internet Service Providers (ISPs) to restore internet service to the SIM cards of the complainants. After two days, the same court ordered the ISPs to restore internet service for all subscribers all over Sudan.

On November 11, Al-Sadig Gamaludin, the general manager of the Sudanese Telecommunication and Postal Regulatory (TPRA) issued an administrative decision directing the ISPs to continue cutting off internet services, saying: “Executing the higher leadership directives to cut off the internet according to the emergency state and considering the emergency state as a sovereign decision related to protecting the national security and it’s greater than any other decision that comes from any other institution. So, the internet shutdown decision is valid until further notice.”

The TPRA decision depends on Articles 6 (J), 7.1, article 7.2 (A) of the TPRA law of 2018, which assign the TPRA the duty of “protecting the national security and the higher interests of Sudan,” and “the state's obligations and requirements in the field of national security and defence, and national, regional and international policies.” “National security” is a vague term that was not defined, which let the authorities abuse it in their interests against the people’s interests. Also, Article 77 says: “TPRA has the right to shut down any wireless device or wireless station or broadcast station temporarily or permanently if it turns out that it’s working in a way that violates the law rule and the regulations.”

The ISPs appealed the TPRA's decision, and the judge rejected it and ordered them to restore internet services. The government ignored this directive. Subsequently, the general court in Khartoum issued an arrest warrant for the CEOs of telecom companies in Sudan, denying their release until they restored internet services to all subscribers. As a result, the internet was restored with some restrictions on social media sites. During this time, Sudanese people uses VPN to bypass the blocking. Private companies like Proton VPN provided free VPN to the Sudanese people.

Internet freedom is a human right. The people in #Sudan can use ProtonVPN for free to bypass online censorship: https://t.co/xEBTynf9Vb https://t.co/URen2sLJw5

The courts continue to side with the Sudanese people. On November 24, the general court of Khartoum court, which belongs to the first level of courts, ordered the ISPs to restore the internet without any restrictions. Netblocks confirmed the restoration on Twitter:

ℹ️ Update: Social media and messaging platforms have been restored in #Sudan on all major internet providers.

Shahad Abdelrahman, a legal advisor at Allied Attorneys, a Sudanese law firm based in Durban in South Africa, said that she did not expect the internet shutdown to affect the legal process because of the independence of the Sudanese judiciary, as well as the court’s continued dependence on analogue methods like paper and pen. However, she did raise concerns about the ongoing court strike as judges joined the nationwide civil disobedience confronting the coup. Even so, internet shutdowns remain a political challenge in Sudan. “In a recent case,” Abdelrahman added, “ lawyers went as far as securing a written undertaking from the internet service providers prohibiting them from switching off the internet, but we are yet to see the results of this procedure.”

Waleed Ahmed, an independent journalist working in Khartoum, explained to Global Voices that the shutdowns were a major social and economic challenge in Sudan, disrupting work and especially the already tenuous connections with the rest of the world because of the legacy of sanctions. He concludes:

I know many who lost jobs and educational opportunities, and this is without mentioning those who lost financially due to the dependence of their work on the internet. We have lost the right to express our opinions and I personally have lost contact with friends in the diaspora. They have violated our right of expression.