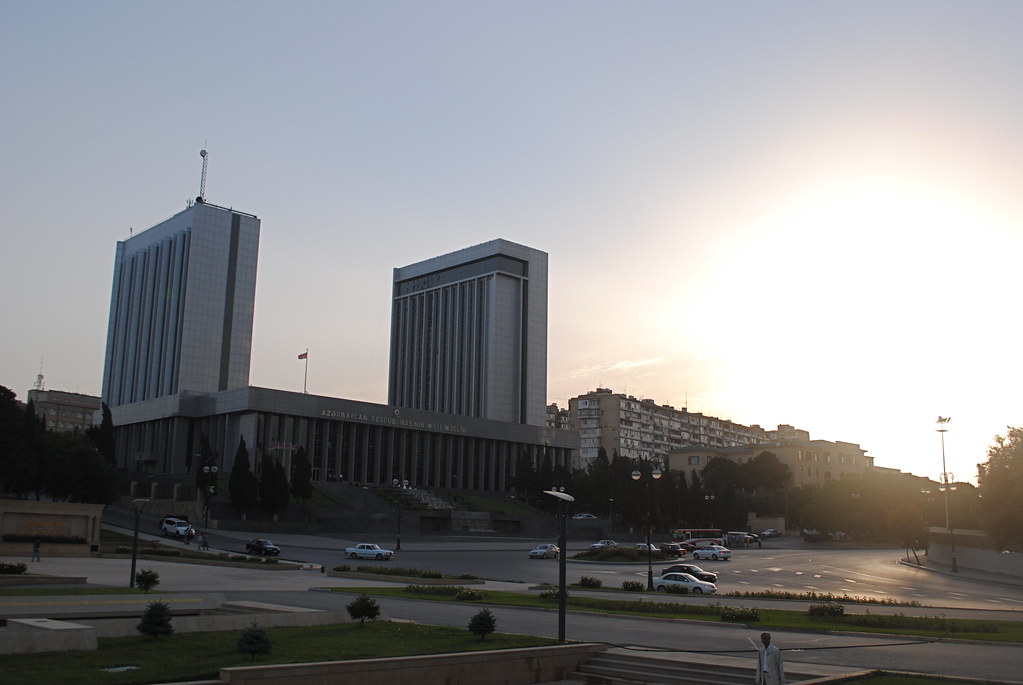 The Azerbaijan Parliament Building in Baku. “DSC_0660″ by Salvatore.Freni is licensed under CC BY-ND 2.0

On December 30, Azerbaijan's parliament approved a new media law after its third and final reading. The law was passed despite mounting criticism from local journalists and is set to be signed by President Ilham Aliyev and become effective as of January 1, 2022. Hailed by its proponents as a reform bill, critics of the law warn that the new law's will have an extensive impact on media freedom and independence in Azerbaijan.

Behind the new law

The government first introduced the idea of the new law in January 2021 following a presidential decree “deepening media reforms in the Republic of Azerbaijan.” The same decree called for the creation of a new media agency, the Media Development Agency (MEDIA), to replace the existing government institution, the State Support Fund for Mass Media Development.

The new media agency was tasked with developing the draft law but kept extending the deadline for opening discussions and debates with the rest of the journalist community. A copy of the draft was leaked days before it was sent to parliament for its first reading on December 14.

Throughout the past year, a group of journalists working for non-state and opposition platforms called for transparency and open discussion around the new bill. On December 15, the group issued a joint statement calling on the government to drop the bill altogether unless it was willing to set up an independent working group that included media practitioners from various opposition, non-government media platforms, and legal experts, to revise the bill. Signed by the representatives of Azerbaijani civil society, the statement said:

We, the signatories of this appeal, regret that the legislative proposal on the Draft Law on Media adopted by the Milli Majlis in the first reading opens up a wide range of opportunities to restrict freedom of media and freedom of expression, consider the hasty discussion of the proposal without passing the public discussion test as disrespectful to democratic values, and call on the Milli Majlis to remove the bill from the agenda and return it for revision.

Criticism of the bill focuses on a list of new measures and regulations covering “organizational, legal and economic activities of media entities and limit[ing] the acquisition, production and sharing of information,” that will become effective at the start of the new year. Among these measures is a new single registry for journalists’ accreditation valid for three years. Journalists with a previous criminal record won't be eligible to register or apply for accreditation. This specific criterion, according to the Organized Crime and Corruption Project, an investigative journalism platform, will “eliminate a significant number of independent reporters,” given the country's track record of imprisoning journalists over the years. Although registration is voluntary, those not in the state system would effectively lose the right “to access information from public authorities, attend government events and press conferences,” reported OC Media.

“It will be the state that arbitrarily decides who is and who is not a journalist following a “test” about which no details have been disclosed. And it will be the authorities who hold the list and personal details of all registered journalists and media outlets (including their addresses and the details of their bank accounts and work contracts). This will put them at additional risk in a country controlled by an authoritarian president, Ilham Aliyev, who is regarded by RSF as a press freedom predator,” said a statement issued by the international press freedom watchdog Reporters Without Borders (RSF) on December 30.

Other restrictions include limits on media management. According to the new law, owners of media entities must be citizens of Azerbaijan as well as full-time residents of the country, “which would effectively ban many of the country’s independent media which are run by Azerbaijanis who fled the country’s already repressive media environment,” reported Eurasianet.

Supporters of the law, including the new Media Development Agency and the country's Press Council, say the bill is aligned with international norms and principles. But critics disagree: the joint statement by local civil society representatives issued on December 15 said the law does not meet the requirements set out by the international norms, and instead “creates favorable conditions for unnecessary interference with freedom of expression and freedom of media.”

Similarly, Jeanne Cavelier, the head of RSF’s Eastern Europe and Central Asia desk, said, “[The law] violates article 50 of the Azerbaijani constitution, on freedom of information, and article 10 of the European Convention on Human Rights (ECHR), on freedom of expression. The state is overstepping its powers by interfering in the professional activities of journalists, without any consultation with independent media or experts specializing in freedom of expression.”

On December 24 and 29, journalists gathered outside the parliament building to protest the new bill.

In an interview with Jam-News, independent journalist Ulviyya Ali said, “Our right to access information is being taken away from us. [The government] wants us to cover developments in the language that suits their interests and based on the rules set up by them. By creating bureaucratic hurdles, they won't force independent journalists from showing the reality. We refuse to recognize the new law that goes against our constitution and will continue our work even more professionally, principled and independently.”

Unregistered journalists won't be able to film protests or elections. This is really bad…

The Parliament hammered the last nails to the coffin of journalism today in Azerbaijan as the “On The Media” law passes the 3rd reading. It is expected to be signed by Aliyev and be effective starting January 1 2022.

Media law expert Alasgar Mammadli told Kanal13 in an interview that the law now grants the authorities the right to block online content on a whim. Azerbaijan has already been blocking a wide range of independent and opposition news websites since 2017. The most recent findings were released this summer by Azerbaijan Internet Watch in partnership with OONI. But media censorship is an ongoing issue, according to Qurium Media Foundation, which released another report this summer documenting a decade of media censorship in Azerbaijan based on the organization’s work assisting targeted and blocked news platforms in the country.

In parallel with the amendments to the different laws, the new media law introduces a lot of vague and illegitimate restrictions & further tightens the already restricted space for the freedom of expression, media freedom, and free flow of information on the Internet. https://t.co/RYrJ5p8Ztp

Even before the law was passed, signs of increasing restrictions on freedom of speech were visible. This December, authorities issued a series of warnings and fines to news websites, journalists and social media users. Most recently, at least five social media users received a warning from the prosecutor office over content shared on the platforms. According to Report.az, all five received an official warning on the grounds of spreading false information.

Earlier this month, another group of social media users received a similar warning. In addition, on December 18, journalist Sakhavat Mammad from the Yenicag.az website, was fined in a late-night trial on charges of publishing prohibited information on an information resource or information/communication network in violation of Article 388-1.1.1 of the Code of Administrative Offenses.