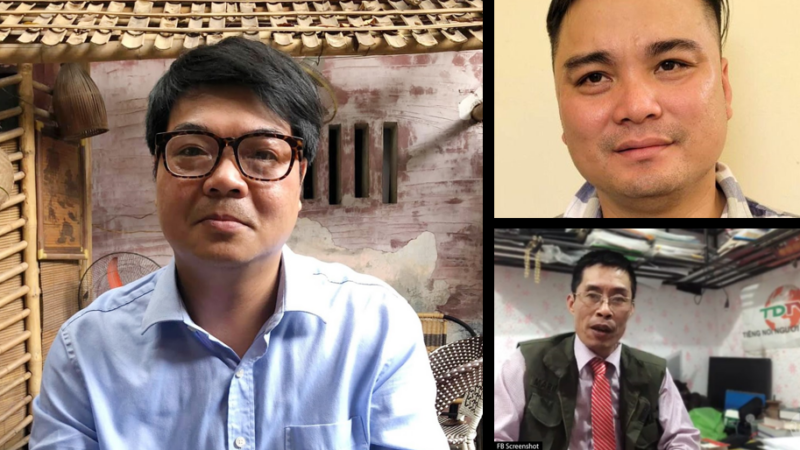 Following a flurry of high-profile trials in the last two weeks of 2021, the People’s Court in Vietnam kept on rolling as the new year began. Eight citizens were arrested in the first two weeks of 2022 for changes related to “anti-State propaganda” or speech violations, with a few multi-year sentences tacked on for good measure.

The trial that garnered the most international attention was for independent journalist and author Pham Doan Trang, who was not even notified of her December 14 trial until one day before it was scheduled to take place. After the trial, news of her shocking nine-year prison sentence barely got a chance to sink in when it was followed by three more trials in rapid succession.

Trinh Ba Phuong and Nguyen Thi Tam were convicted and sentenced on December 15 to 10 years and six years in prison, respectively, for helping Dong Tam villagers publicize their story about an attack on their village that resulted in the death of three police officers and one villager. The next day, long-time activist Do Nam Trung was sentenced to 10 years under Article 117 — a part of Vietnam’s criminal code often used to silence activists.

Christmas Eve 2021 was marked with the appeal trials for mother and son Can Thi Theu and Trinh Ba Tu. As expected, the court upheld the eight-year sentence each for the two long-time land rights activists who were also involved in helping victims of the deadly Dong Tam police raid. Unsurprisingly, both defendants were defiant and forcefully told the judges that they had broken no laws.

Then on New Year’s Eve came Le Trong Hung’s turn. The constitutional advocate ran for a seat on the National Assembly as an independent and was tried and sentenced to five years in prison for “anti-State propaganda.” Hung’s wife was not even allowed into the courtroom to hear her husband defend himself.

As if that’s not bad enough, the new year opened with a highly unusual and bizarre case. Le Tung Van, the 90-year-old founder of a temple and orphanage in Long-An Province, was arrested along with three of his foster children. His temple, Tinh-That Bong-Lai, does not belong to any religious tradition or organization sanctioned by the state. For years it’s been known for producing successful singing acts that have won many game show awards. In fact, one of its YouTube channels has millions of subscribers.

Initially, police charged Van and his temple with three crimes: financial fraud, incest, and abuse of democratic freedoms. On Facebook, rumors began circulating that the old monk had fathered illegitimate children and then had sex with some of them, producing even more offspring. The salacious allegations created a social media maelstrom that seems to have been timed to distract from a massive “COVID-19 Test Kit” kickback scandal involving several ministries and hundreds of millions of dollars. But as the public began to question the veracity of the claims and the motives behind the outlandish rumors, the authorities quickly withdrew the first two charges against the temple.

Le Tung Van was later released but remains under house arrest. The three men who remain in custody are Le Thanh Hoan Nguyen, 32, Le Thanh Nhat Nguyen, 31, and Le Thanh Trung Duong, 27. It is not yet known what these men will ultimately be charged with.

In the meantime, the unofficial “incest” accusations are still being spread like wildfire by Facebook groups and pages suspected of being a part of Force 47 — the cyber attack army run by Vietnam’s Ministry of Propaganda. What their ultimate goals are is still unclear at this point.

On January 5, police broke into YouTuber Nguyen Thai Hung’s house as he was live streaming and arrested him while the camera was still rolling. The surreal video clip, which captured the sounds of breaking glass and shouting men, has since gone viral. Hung’s wife, Vu Thi Kim Hoang, was also arrested. Hoang’s sister later told Radio Free Asia that the men who broke in were not wearing police uniforms, leading her mother, who lives next door, to mistake them for robbers, and she started screaming for help.

At the time, the couple’s family was neither shown any warrants for arrests nor offered any explanation. It was only a few days later that the authorities told them Hoang had been charged with “abusing democratic freedoms” under Article 331. Hung is yet to be charged with any crime and the couple remains in custody.

A week later, plainclothes police abducted Le Manh Ha on January 12 while he was traveling in Tuyen Quang Province. Ha runs a YouTube channel where he discusses legal matters related to land grabs, as he himself was a victim in the past. Ha’s wife, Ma Thi Tho, said police took her husband back to their home, where they conducted a search and seized a number of electronic devices and equipment. Even though the men were not uniformed, they did nevertheless show a warrant for the search and arrest. Unsurprisingly, Le Manh Ha has been charged with “anti-state propaganda” under Article 117.

On January 14, police in Ha Tinh Province arrested Nguyen Duc Hung, 31, and charged him with “anti-state propaganda” as well. It is not clear yet at the time of this writing what illegal activities Hung was accused of, but he’s the eighth person arrested so far this year.

Arrests yes, but trials too

Several trials also took place during the first two weeks of 2022. Mai Phan Loi, the highly respected founder and director of the nonprofit Center for Media in Educating Community (MEC), was sentenced to four years in prison on “tax fraud” charges on January 11. He was also ordered to pay a fine of nearly USD 90,000.

An independent journalist for the past five years, the low-key Loi has been quietly educating his readers about Vietnam’s Constitution and the law. He was arrested in July last year along with his associate Bach Hung Duong, who was also sentenced to 30 months in prison on the same charge. “Tax fraud” is often used by the government to silence critics who are business owners. Dang Dinh Bach, director of the nonprofit organization Law and Policy of Sustainable Development (LPSD), will be brought to trial on January 24, 2022, facing the same charges of alleged tax evasion.

Finally, in an alarming case of prisoner abuse, police captain Le Chi Thanh was sentenced to two years in prison for “obstructing officials carrying out government duties.” Thanh ran a YouTube channel where he regularly posted stories about police abuse and corruption. Thanh’s lawyer, Dang Dinh Manh, said his client claimed in court that he had been tortured and beaten and even hung by his legs for days in a room full of human feces. The lawyer noted that Thanh, once a strong and muscular policeman, had to be helped walking into court. A photo of Thanh appears to show bruises on parts of his body. After Thanh’s sentence was announced, the prosecution said it would add a new charge of “abusing democratic freedoms” under Article 331, virtually guaranteeing that more prison time will be added.

As the lunar new year, the Year of the Tiger, gets underway, human rights observers are waiting to see if the president of Vietnam will issue any goodwill pardons. But if the first few weeks of 2022 are any indication, it’s highly doubtful any political prisoners would make it onto such a list.