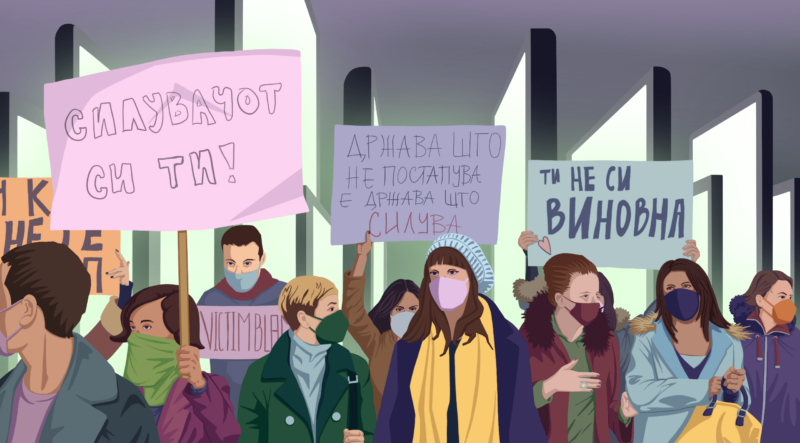 Protesters holding signs in Macedonian reading “You are the rapist,” “The state that doesn't enforce the law is the state that rapes,” and “[Woman] you are not to blame.” Photo by Walker Gawande via Unbias the News. Used with permission.

This article was originally written by Elena Gagovska, edited by Tina Lee and published in Unbias The News. An edited version is republished in two parts by Global Voices as part of a content sharing agreement.

“I did not know what to do, I panicked, I was scared, I have never experienced anything like that. I went to the Department Against Cyber Crime [The Computer Crime and Forensics Unit] to report what happened. I showed them the picture, I showed the messages and the calls, that I have names and surnames of the people who wrote and called me. When they heard that I was an adult, they said that the law in our country cannot do anything, because it is only for minors,” said Ana Koleva, a 28 year-old woman from Kavadarci, North Macedonia.

In a viral Instagram video posted on her account on January 27, 2021, she spoke about the harassment she experienced after her Instagram profile and personal phone number were leaked to a Telegram group. 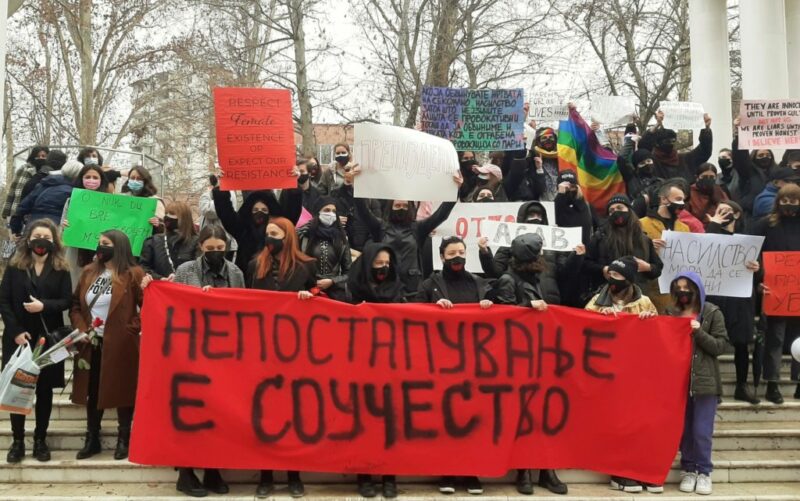 Protesters hold a sign that says “Failure to act makes you complicit” and is directed towards the government institutions that failed to resolve the Public Room Case. Photo by Elena Gagovska via Unbias the News. Used with permission.

Koleva was one of an unknown number of victims of online sexual harassment by members of a popular Telegram channel called Public Room. In the online messaging channel, men from North Macedonia (and possibly some from neighboring countries) shared images and videos of child pornography, private nudes, social media profiles, and private phone numbers of countless women and girls from across North Macedonia — without their consent.

Ana Koleva is one of the only victims of Public Room who have spoken about their experience without hiding their identities. Her Instagram video has almost 400,000 views and played a key role in the increased media coverage of the case in 2021.

The story of Public Room, however, began not in 2021, but rather in January, 2020 when the initial Telegram channel with 7,400 members was discovered. The non-profit medium Radio MOF first reported the group’s existence on January 25, 2020 after being alerted by concerned high school students.

It was discovered that pictures of open social media profiles — and private nudes — of underage teenage girls were shared in the channel, but the media reported that there were images of adult women as well. A1on journalist Meri Jordanovska also reported that there were known businessmen and politicians in the group. The authorities suspected that the creator of the initial Public Room was a teenager, but it is unclear if he was ever formally charged with anything.

While the age of sexual consent is 14 years in the country, Nataša Boškova, a lawyer for the human rights NGO Coalition Margins, explained to Unbias the News that, according to the Macedonian Criminal Code, a child victim of the crime of distributing child pornography is considered to be a minor up to 18 years of age. 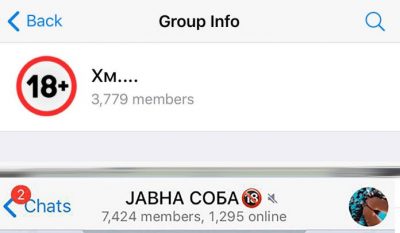 However, distribution of child pornography is not the only crime that was allegedly committed in Public Room. There was also non-consensual sharing of private nudes of adult women and misuse of personal information, such as non-consensual sharing of social media profiles, private addresses and phone numbers, all of which resulted in large scale online sexual harassment.

Moreover, in 2020, after its discovery, the group was almost immediately shut down by Telegram upon request of the Macedonian Ministry of Internal Affairs (MVR), which also encouraged victims to report such crimes. Yet, even this swift action was insufficient since no perpetrator was actually punished for their involvement in Public Room.

Thus, it was hardly surprising that a similar group with an identical name sprung up in January 2021.

Similarly to the previous year, the group was shut down almost immediately upon discovery at MVR’s request to Telegram, and four people connected to the chat were taken in for questioning on January 28, 2021. On the same day, then-Prime-Minister Zoran Zaev controversially threatened to ban Telegram from Macedonia altogether.

The Telegram ban never came to fruition, but such a move could have set a dangerous precedent for freedom of expression online in North Macedonia, an EU candidate state.

Since GDPR regulates misuse of private information, it is clear that Ana Koleva should have been able to file a complaint on those grounds at least with the Agency for Personal Data Protection, and that the Department Against Cyber Crime could have directed Koleva to this government body but failed to do so.

“According to the law on personal data protection, all persons who believe that their privacy has been violated through misuse of their photos from social media can seek protection before the Agency for Personal Data Protection,” Nataša Boškova told Unbias the News.

“The Criminal Code also provides protection for the misuse of personal data, and most “Public Room” victims can seek protection under this provision. The Computer Crime and Forensics Unit at the Ministry of Interior can assist the public prosecutor’s office in securing the identity and evidence of the perpetrators of the crime so that they can be prosecuted and punished more effectively.”

In both 2020 and 2021, sexist and moralizing narratives engulfed Macedonian social media feeds, with some people alleging that the girls and women were to blame since they were only seeking attention by taking revealing photos, while others tried to put the blame both on the men/boys and the women/girls.

Sex educator and feminist activist Natalija Krstevska spoke on the student podcast Justinijan Zbori about the victim blaming social media trend of posts that urged citizens to “Educate [their] children.” Krstevska said that the trend dispersed the blame away from the boys and men who are perpetuating sexual violence, and, instead, suggests that girls and women also have a responsibility to learn how to protect themselves from this kind of violence.

“Double victimization occurs from close social/family circles, to the level of institutions and a huge focus must be given to the unlearning of this phenomenon, because these types of comments represent the relativization of violence and taking the side of sexual predators,” Kalia Dimitrova, the editor-in-chief of the Macedonian feminist platform Meduza, told Unbias the News.

“The public always has some idea of what the girl or woman should or could have done to avoid becoming a victim, and very rarely has any idea what can or should be done with the one who harassed, hurt or humiliated her. After all, sexual violence is probably the only crime where the victim is blamed for something someone else has done.”

On February 3, 2021, hundreds of feminists and other supporters took to the streets in protest against the Macedonian institutions’ inaction and lack of punishment of the perpetrators. The protesters marched the streets of Skopje from the Ministry of Internal Affairs to the Public Prosecutor’s Office, deeming them responsible for the state of impunity.

This is the first part of the report. The second part is here.