Military authorities could soon have access to Telenor's customer database 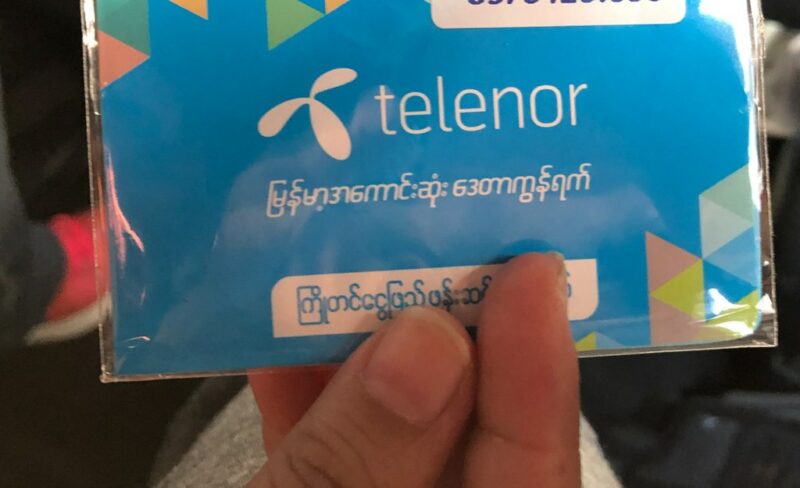 Activists and civil society groups in Myanmar have sent open letters and launched an online petition to the Norwegian government opposing the sale of Telenor Myanmar to a company with links to the country’s Tatmadaw (armed forces).

Telenor is a multinational telecom company based in Norway. It started operating in Myanmar in 2014 through its subsidiary, Telenor Myanmar.

After the military coup in February 2021, Telenor Myanmar faced pressure from the military government which gave several orders related to surveillance and content blocking. In July, Telenor announced its intent to leave Myanmar.

Further deterioration of the situation and recent developments in Myanmar form the basis for the decision to divest the company. In the present situation it has not been possible for Telenor to conduct an ordinary sales process.

Over the past year, Myanmar’s military government has imposed media restrictions and waged a brutal crackdown targeting activists, opposition leaders, and anti-junta groups.

According to news reports, Telenor will be sold to Lebanon-based M1 group and Shwe Bayin Phyu, a group of companies with ties to military-owned businesses. The sale is to be completed on February 15 and the partnership is expected to be named Investcom Myanmar.

Activists and civil society groups warned that the sale would allow the military regime to access more than 18 million Telenor customers’ data. Sensitive information of users including SIM card registration, call and internet logs, and location data could now fall into the hands of the military.

Launched on February 10, the online petition opposing the sale of Telenor has already garnered more than 170,000 signatures as of this writing. The petition cites the danger of this transaction for those opposing the junta:

There are high risks of unpredictable violence, including murder.

All Telenor users and their affiliates, including their family members, are at risk and could be arrested, or murdered based on the user data shared by Telenor to the new owner and the military, by proxy.

The petition offers these alternatives for Telenor to consider:

● Consider all alternatives to the sale to Investcom, including re-licensing, permanently deleting all user data, and shutting down telecommunications infrastructure.

● Not transfer nor sell user data to anyone under any circumstances and for any reason.

Telenor’s sale to a military proxy is described as part of a “digital coup” which placed the country’s telecommunications providers under the control of the junta:

These targeted efforts will enable the military to bring all network services under its stranglehold and escalate abuses of privacy and security rights, through surveillance and related efforts. Yet, disturbingly, not a single telecommunications sector actor has implemented urgent data protection and privacy safeguards needed to protect their customers.

As early as last July, 464 civil society groups expressed their concern about Telenor’s decision to divest its operations in Myanmar without providing clear information about how it will protect the data of its customers.

In January, 168 groups sent a letter to the government of Norway, which has a controlling stake in Telenor, about the dire consequences of selling the telecom subsidiary in Myanmar to a company with a known record of doing business with repressive regimes.

It is our opinion that the sale of Telenor Myanmar to the M1 Group has significant geopolitical consequences. Therefore, we strongly believe that it ought to be brought directly to the Norwegian Government to be decided on, and not left to the Telenor Group ASA alone. It worries us deeply that Telenor so far has ignored the real government of Myanmar, but rather awaits acceptance of the sale from a violent and illegitimate extremist regime.

In an interview with Myanmar Now news website, Norwegian judge Hanne Sophie Greve stated that she believed Norwegian officials could be held liable if they allow Telenor to be sold to a junta proxy:

I do believe that anyone who assists the military in Myanmar in getting access to data related to perhaps 18 million customers of Telenor may actually be aiding and abetting crimes against humanity.

I think that it would be advisable for Telenor to ask the chief public prosecutor in Norway to give an opinion about the possible consequences of the sale. Telenor should await that opinion. I cannot imagine that the answer will be that releasing 18 million customers’ information cannot be aiding and abetting, if the military’s behaviour in Myanmar already, or tomorrow, amounts to crimes against humanity.

Telenor Myanmar tweeted on February 11 its commitment to continuing its operations “as normal”:

We remain committed to keeping customers connected while safeguarding employees and partners. Our operations continue as normal. We regret the uncertainty and hope for clarity soon. https://t.co/0BBmJgFKGa pic.twitter.com/ipDqIzxG7O